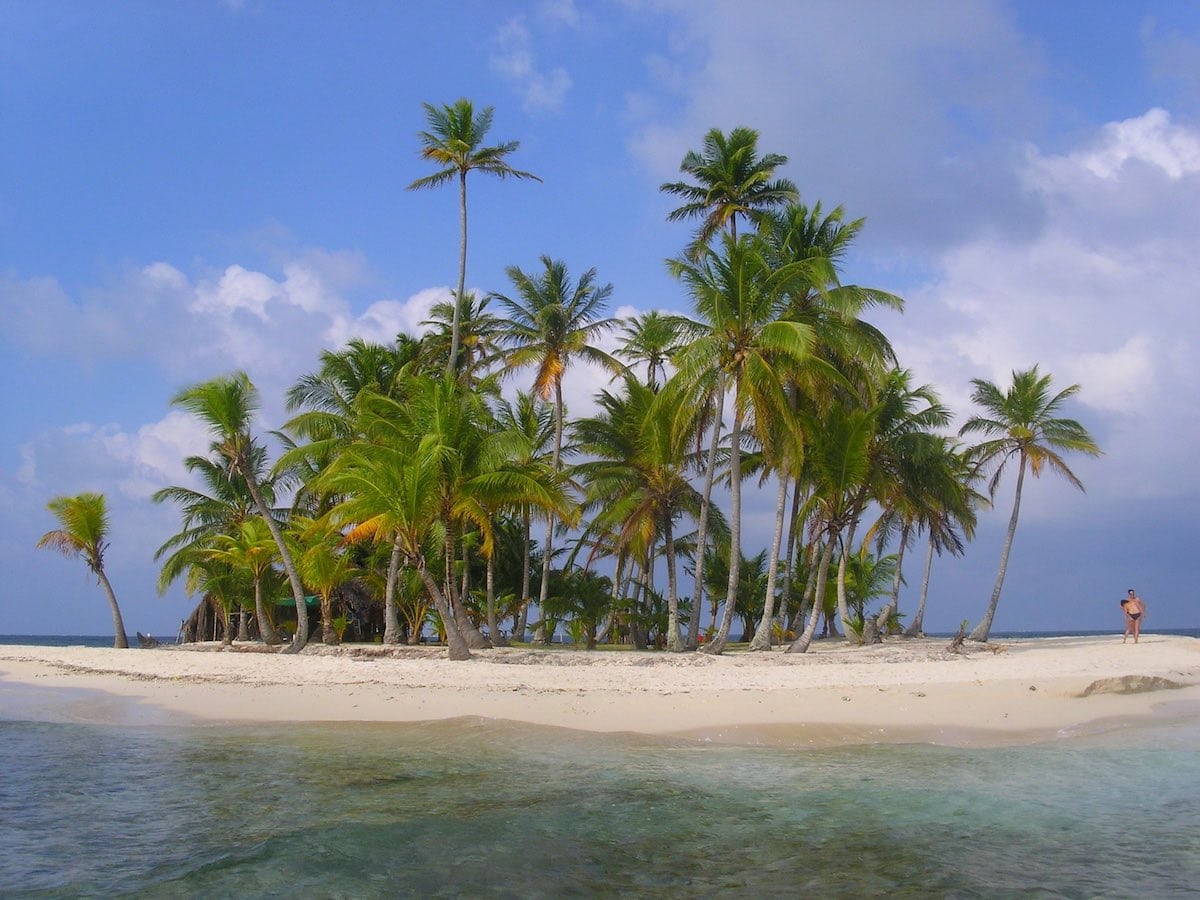 It’s time to travel to the San Blas Islands in Panama – a highlight of my time in Central America.

That’s what the article in Wanderlust magazine said. It was talking about the Guna Yala – the indigenous people living on the San Blas Islands just off the east coast of Panama. My plan? To capture some of that happiness to take home!

The draw of this archipelago is more than just spending a day lazing on a deserted beach; it’s to witness the Guna Yala culture first hand. These indigenous people live in a handful of places in Panama and Columbia, with the islands of San Blas being the most densely populated. It’s fair to say, this Guna Yala region is particularly special.

Panama’s government has tried to control and change these communities against their will. After a few revolutions, there is now a treaty in place, which permits them to have a certain degree of autonomy. Some islands are tiny, with little more than a dusting of sand and a few palm trees, others have small shacks or basic hotels, while a few are more developed and home to large communities with their own schools and churches.

How To Get To The San Blas Islands

First things first, this San Blas Islands map will help you get your head around where the islands are…

If you research how to visit, you’ll find a lot of websites offering expensive package deals. They collect you early in the morning from Panama City, transport you by 4×4 to the water taxi port where you then take a boat to the island you’re visiting.

If you want to stay overnight, that can be arranged, otherwise you return in the evening. These San Blas islands tours are pricey and you’re restricted to a rigid itinerary, not to mention travelling with a bus-load of tourists.

We looked at other ways to get there, but felt nervous about the options. Many forums said that you could be stopped from going along the road to the port, and that some of the roads were in such bad condition they might be difficult to navigate even in a 4×4. Add to that, the main road wasn’t even listed on Google Maps!

Going against all of this research, we decided it would be an adventure, so we rented a 4×4, left Panama City at 5am and travelled to El Carti. The landscape en-route was stunning with grassy mountains illuminated up by the sunrise, and topped with low-hanging cloud.

As we neared the coast we hit a queue of cars, and discovered that they only started allowing people through the checkpoint at 7am. It was 7.05am, perfect!

We continued along to the port, but accidentally took the road leading to the locals port, rather than the one the tours used. Again, perfect – we didn’t encounter hoards of tourists.

We negotiated a boat for $25 per person, which would take us to a few islands throughout the day. First stop Tupile – a developed island that was home to an indigenous community. There was a school by the dock, numerous thatched homes, a Mormon church (Mormonism is big in San Blas), and you could walk from one end of the island to the other in 5 minutes.

It was fascinating to see the women hard at work cooking and cleaning, wearing eye-catching traditional mola fabrics (brightly coloured and patterned textiles). After reading so many warnings, I couldn’t believe we had actually made it.

Children wandered around with their siblings, dressed in more of the beautiful textiles. Some ran around a basketball court while others sat at their school desks chanting Spanish numbers. Chickens strutted freely around the island. Houses were generally made from wood and thatch, and some had corrugated iron roofing.

Boats were the only mode of transport – there was no need for bicycles, motorbikes or cars – where could you go?! I was fascinated by the mass of washing lines, filled with brightly-coloured clothing, which appeared to stretch from one end of the island to the other.

Before we left Tupile, we were approached by a lady and her daughter in a handmade wooden kayak. They were selling mola fabrics, and we were keen to buy some of the beautiful designs.

When we asked if we could take a photo of the two of them, that also came at a price… “two dollar” she barked.

These people may choose to remain separate from Panama’s commercial dealings, but they’re still savvy! Her daughter stared at the camera lens, not quite understanding what was going on. We tried to snap another photo. “Two dollar” she said again as she started to paddle away. Very savvy!

As we hopped back on board our water taxi we could see a handful of other islands nearby – some built up like Tupile, some with just a few palm trees on.

The water was crystal clear, with lots of exotic fish swimming around. Next stop? Paradise. It felt like we were a million miles from the real world.

We visited two other islands that day – Isla Aguja (home to the Icodub Hotel) and the even smaller Isla Aroma.

What was there to do on these two paradise islands? Other than swim, snorkel, walk their perimeter and relax on the beach… not very much! What a beautifully unfussy life!

No one was in a hurry or clutching a mobile phone. There was no TV or radio blaring. I spent an hour relaxing in a hammock suspended between two picture-perfect palm trees.

The crystal-clear water made for some incredible snorkelling. I saw masses of exotic, brightly coloured fish, beautiful coral, and then there was the sea monster. As I swam over one area of coral and rock I saw some long strands sticking up towards the surface.

I swam down and took a closer look, only to regret my decision. A huge, long-tentacled beast was nestled into the edge of the rock. I didn’t wait around to introduce myself!

On Isla Aguja there was a loud hum from a generator, but once we escaped to Isla Aroma the only noise came from the people, the waves lapping on the shore, the crabs popping in and out of the sand, and the odd coconut falling from a tree. It’s the most remote place I’ve ever been, and it was impossible not to feel an amazing sense of peace.

Island life certainly has a few challenges. From what I’ve read, the majority of homes on San Blas don’t have access to electricity and many islands don’t have their own water supply. Tupile is one that does, so many boats arrived to fill up containers to take elsewhere.

There’s no real system to get rid of waste. The toilets are generally seats hovering above the sea, so waste is going directly into water. I hadn’t really thought about this until I was swimming later in the day, and a dirty nappy floated past. It was sad to see a paradise scene blighted by rubbish.

A visit to the San Blas islands is an incredible experience. I loved it, and I was so pleased that we risked the unknown! The road was bumpy – but we were allowed in. The boat took a bit of negotiating – but nothing we couldn’t handle. When we were able to converse with the locals – they were friendly. I felt like there was a real sense of passion and pride amongst them.

So, are the people of San Blas the most content people on the planet? I think they might just be… and I certainly took a piece of that feeling home with me.

8 thoughts on “Travelling To The San Blas Islands, Panama”