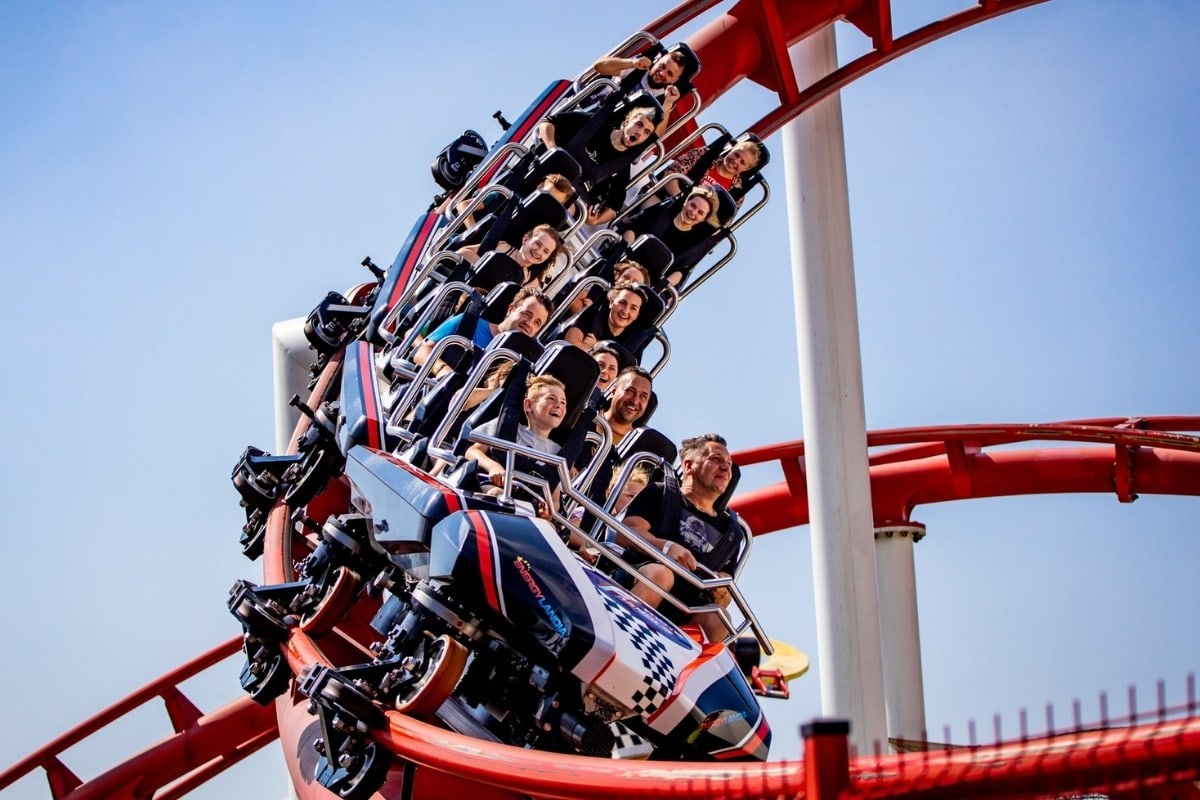 From serious adrenalin thrills at Europa-Park to fun family days out at Disneyland Paris, these are the best European theme parks.

Do you crave the adrenalin rush of big roller coasters? Or is a water park more your thing? Perhaps you’re feeling nostalgic for dodgem cars? Already ridden everything at Alton Towers Resort and the other big UK amusement parks? Then it’s time to look further afield!

We’ve all heard of Euro Disney, but there are plenty of other world class theme parks in Europe! Many are close to major cities, so are easy to travel to from airports or include in city breaks.

From Germany’s popular Europa Park with its incredible rollercoasters, to PortAventura in Spain, to Tivoli Gardens in Denmark, one of the oldest theme parks in the world, there are so many awesome spots to choose from.

So, which are the best European theme parks? This guide will definitely help you decide which destinations to add to your bucket list!

Europe’s largest amusement park is just a 20-minute train ride from central Paris. 12 million visitors a year make this Europe’s most visited theme park, so be sure to book in advance!

The other area, Walt Disney Studios Park, is themed around Hollywood films, Disney and Pixar animations and the Marvel Universe. If you have the time and budget, take at least two days here to make the most of everything on offer. You could even stay on site at one of the fun themed hotels within the park.

Europa-Park is Germany’s biggest amusement park, and the second most popular amusement park in Europe. This theme park has a cool theme too – you’ll feel like you’re travelling the world as you explore the park.

The attention to detail is incredible… from the Scandinavian area with fresh fish, fjords and a Norwegian Church (where you can get married), to Italy with a miniature St Mark’s Square and pizzeria. Not to mention Spain with a large arena and Holland with picturesque canals. England comes complete with a large scale Globe Theatre, London taxi and bus rides, and of course, a traditional English pub!

If you like rollercoaster rides, this should be on your list of best European theme parks. Yep, Europa-Park has the most rollercoasters of all the theme parks in Europe! There are a whopping 14 scream inducing rides here! You’ll even find a virtual reality rollercoaster here – something I tried out last time I visited. It takes theme park rides to a whole other level!

The park is also known as the location for the Euro Dance Festival, but you’ll find plenty here designed for families and kids too. Want to stay longer? You’ll find onsite themed hotels and a campsite too!

Are you brave enough to try the world’s longest tube slide? You’ll find that in Germany at Galaxy Water Slide World, 30 minutes from Munich.

If the 365 metre ride is too terrifying, there are another 26 slides, so you’re sure to find one in your comfort zone! Not a problem for you? Then give the ‘Big Wave’ or other extreme water challenges a try!

Another of the most visited theme parks in Europe is Gardaland in Italy. It’s in a gorgeous location on the shores of Lake Garda, just 1.5 hours from Milan and Venice.

There are a good selection of extreme rides here, including one with the intense name, ‘Oblivion: The Black Hole’. This one leaves you teetering on the edge of a vertical drop, before you plummet from a dizzying height, reaching speeds of 100km/h.

You’ll also find attractions for the whole family, including a Sea Life Aquarium. Gardaland is also home to the Legoland Waterpark! You’ll need to buy an additional ticket to enter this part, but it’s ideal for young kids!

1 hour and 20 mins outside of Barcelona, PortAventura theme park is another of Europe’s most visited theme parks. Recently, I combined a trip to Barcelona and Catalonia with a stop at PortAventura, and absolutely loved it!

Visiting this theme park is like going on a mini-tour of the world. Start in the Mediterranean, passing cute tapas bars and the super speedy rollercoaster Furius Baco, before making your way to China for some tasty Asian cuisine and the park’s biggest rides Shambhala and Dragon Khan, before relaxing in the lush Polynesian area and finishing your day marvelling at the great pyramid in Mexico.

If you’re travelling with kids, there are lots of family-friendly rides and attractions such as El Árbol Mágico and La Granja De Elmo.

Seeking an adrenalin rush? Then head to Ferrari Land where you’ll find plenty of thrills including ‘Red Force’, Europe’s tallest rollercoaster! It’s a whopping 112m so you’ll need to be seriously brave to ride that one!

A calmer option if you’re in Barcelona is Tibidabo Amusement Park, which opened in 1905. Don’t expect white knuckle rides here!

The charm of this small park is in its restored original vintage carousels and dodgems set against incredible hilltop views. Getting to the park is fun too! After a half hour train journey from the city centre, you’ll need to ride the Tramvia Blau (Small Blue Tram) and then a funicular railway.

Thew views alone make this a beautiful place to visit on a day trip from the city centre.

It might surprise you to hear that Barcelona’s Tibidabo isn’t the oldest amusement park. That honour goes to Bakken, inside the Jaegersborg Deer Park in Denmark.

There is no danger of a noise and neon overload here! The main attractions are an 80+ year old wooden rollercoaster and some quirky independent shops! It’s worlds away from the likes of Disney or Europa Park, but it’s filled with charm.

People have been travelling to this part of Denmark since the 1580s, visiting for the healing springs. It grew more and more popular over the years, as people started selling items on the site.

Looking for a more play based alternative to the popular theme parks? Try Denmark’s Tivoli Gardens in Copenhagen. This is another amusement park with an amazing and long history.

‘Merry Corner’ has some rides, but the appeal here are the gardens and run around outdoor play areas. Pack a picnic and head for ‘Rasmus Klumps World’ which has safe play areas plus some challenging adventure play equipment for older children. Amazingly, its all free!

Energylandia is a large modern amusement park located 30 miles outside of Krakow. It’s Poland’s biggest amusement park and also includes a water park too! The combination of these two zones make this one of the best European theme parks.

Do Fairytale Land and the Family Zone sound too sedate for you? Would you rather be swung around at 62 mph or experience drop rides with 5g of G-Force?! No problem – just head for the ‘Extreme Zone’!

You’ll also find more rollercoasters, and water rides including world’s fastest water coaster Speed. This ride is a mix of a roller coaster and a water ride! You’ll reach heights over 60m and top speeds around 110km/h! Just before the end you’ll feel the impact of the water as you get sprayed from head to toe!

Belgium is home to several theme parks, including Plopsaland de Panne, Bellewaerde and Bobbejaanland. The biggest and best though is Walibi.

There are a lot of fun adrenalin rides here if you’re over the magic 120cm tall. There’s Cobra, Kondaa (which packs some serious Gs!) water ride Pulsar, Werewolf, and The Psyké – which catapults you in less than 3 seconds to more than 85 km/h in a mega loop at a height of 45 meters!

For younger visitors, there are plenty of family-friendly attractions including a carousel, dragon boat and 4D cinema experience.

Efteling is The Netherlands’ largest theme park. It’s a great family day out, as alongside a few daredevil rides and rollercoasters you’ll find picnic spots, a fairytale forest, a steam train and river rapids.

The biggest rides at Efteling include steel roller coaster Python, which has a double loop and corkscrew. There’s Joris en de Draak, a double-track wooden rollercoaster where you’ll feel like you’re racing against another carriage!

There are also spooky experiences Spookslot and Villa Volta for anyone who loves a horror film!

Another of the best theme parks in Europe is Linnanmäki, a short journey from Helsinki. Entering the park is free, and includes the sightseeing tower and some rides for smaller children.

There are 8 rollercoasters and lots of other family rides which you can pay as you go, or buy a wristband pass. The option of adding in the entrance to the neighbouring Sea Life Centre makes this a great day out from the city!

Want to be turned upside down four times, and then hurtled towards water at 56 miles per hour? Then get on the ‘Monster’ rollercoaster!  You’ll find it Gröna Land, a theme park on one of Stockholm’s central islands Sweden.

When you see the rollercoasters from the city centre, no doubt you’ll want to visit! The amusement park has other rollercoasters and drop rides, plus plenty of calmer family options too.

Another option if you’re a theme park lover visiting Sweden is Liseberg in Gothenburg. This one might just give you a glimpse into the future of theme parks too!

Although it looks like a regular park, amazingly it’s all powered by renewable wind energy! The most popular ride here, ‘Loke’, even generates energy and sends it back to the national grid. How about that for some guilt free fun!

I hope you’ve enjoyed finding out about all of these amazing European theme parks! There are so many cool spots to choose from.

If you’re planning a holiday soon, don’t miss my guides to travelling within Europe. From Italy and Spain, to Switzerland and Croatia, there are lots of tips and recommendations to make the most of your time away!