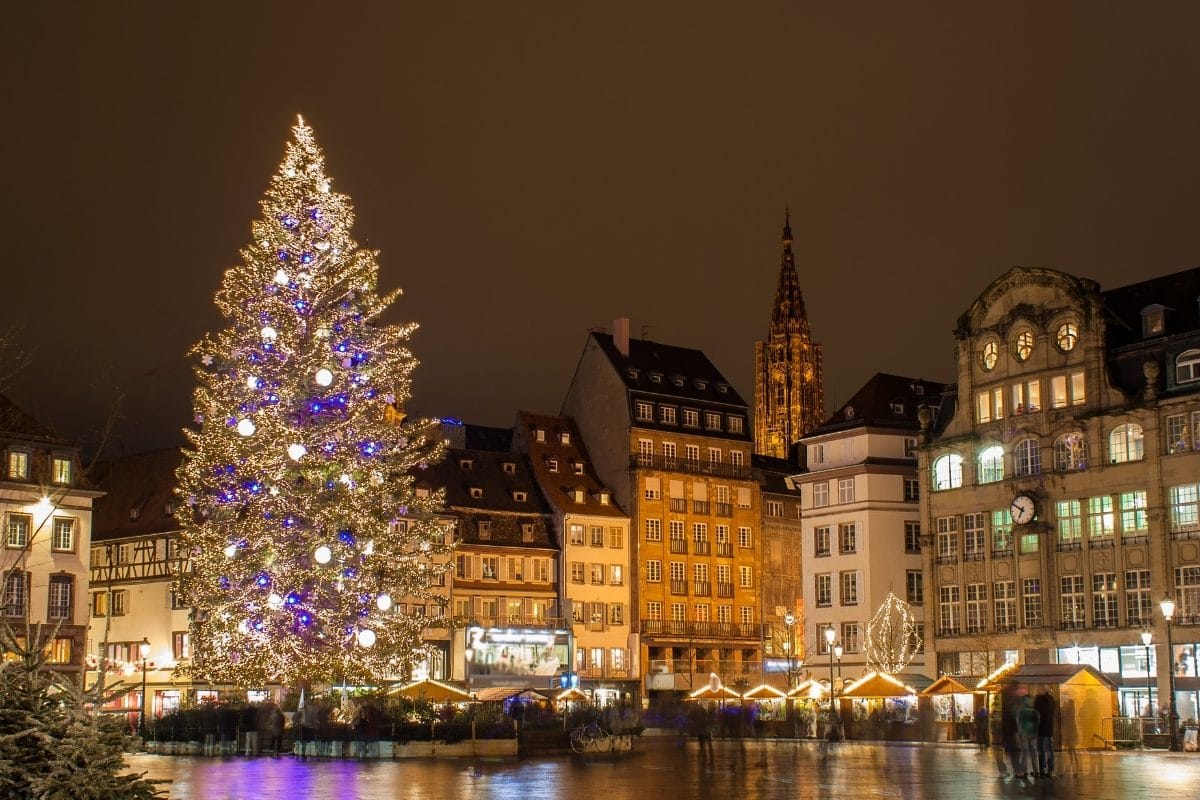 Thinking of visiting France in winter? From Christmas markets to warm weather, these are the best destinations to choose.

You might think of France as a summer destination, with beach breaks on the Cote d’Azur and sunshine-filled city breaks in Paris. However, French adventures in winter can be filled with magic and charm too. From Parisian Christmas markets that will warm your belly and heart, to adrenaline filled ski trips in the French Alps, France has rightfully earned its place as a winter haven.

As one of the most visited nations on the planet, getting to France in the winter is no issue, especially for those based in the UK and Europe. Even better, travellers that plan to spend the Christmas season in France are simply spoiled for choice when it comes to deciding where to go and what to do.

The Alps are one of the best regions in the world for winter sports, cities are full of cultural festivals, and the indulgent cuisine is the perfect accompaniment to the chilly temperatures.

Winter in France – The Weather

France’s size accounts for the varying winter weather conditions experienced across the country. On average, you can expect temperatures to range from 0°C to 7°C during the winter season. As expected, the coldest temperatures will be experienced in the country’s most mountainous regions, places like Chamonix and Massif Central. Winters are far milder the further south you travel, after all you’re not far from the Mediterranean there!

You might find packing tricky, so I’d recommend layering up so you can be comfortable in all temperatures. So, if you’re ready to start planning your trip, here are the best places to visit in France in winter.

10 Best Places To Visit in France in Winter

Christmas markets in the shadow of the Notre Dame Cathedral; the Eiffel Tower dusted in glinting frost; cold hands warmed by a fresh cup of coffee at a Parisian café, France’s capital city is a no-brainer during the winter months.

There really is nowhere quite like Paris in the winter, with its festive lights and glittering Eiffel Tower. Walks along the Seine are made all the more memorable, and the city’s grandest landmarks become part of a Christmas dream world. You’ll see families sharing moments ice skating on the rink at the Champs-Élysées, while crowds flock to Galeries Lafayette to see the store’s famous Christmas tree.

Paris’ popularity is well deserved. It really is one of the best places to visit in France in winter. If you’re planning a trip, definitely take a read of my guide to visiting Paris in winter.

The port city of Marseille offers visitors a mild, yet still distinctly French, winter. The southern city often finds itself being described as underrated, but don’t let that put you off. Marseille is a destination to stop by if visiting France in winter.

Crowds are almost non-existent come the months of November and December, and temperatures sit at a daily average of 12°C. Visiting out of the summer season gives you a chance to see the city without the crowds. Just imagine exploring The Calanques and Vieux Port without the hustle and bustle, or visiting the Notre Dame de la Garde and not having to queue. If it’s rainy, there’s plenty to do in Marseille in winter too, including learning about Mediterranean culture at MuCEM or visiting Marseille’s oldest museum, Palais Longchamp.

Plus, you can still enjoy outdoor dining by the old port, even at the coolest times of the year.

While you might associate cities on the south coast as summer destinations, if you’re spending winter in France, don’t overlook Marseille – it offers so much.

Nice is one of my favourite cities to visit in France in summer, but it has plenty of appeal in winter too. One of the gems of the French Riviera, this city hosts the Nice Carnival every winter in February. It’s one of the world’s most famous community celebrations. Visitors and residents watch as floats parade to the rhythms of upbeat music. It is a spectacle not to be missed.

Nice is a beautiful city to explore on foot, no matter what time of year you visit. Take a walk along the Promenade Des Anglais which goes along the seafront for several kilometres or climb the steps to Parc De La Colline Du Chateau for some of the city’s best views.

The labyrinth of skinny streets and tall colourful buildings of Vieux Nice look very pretty with festive lights and a bit of winter magic too.

Whether it be the carnival, or the mild Riviera temperatures that draw you to Nice, there is no doubt that the southern city is a great place to visit in France during the winter season.

If you love winter sports and adrenaline activities, you’re going to be in your element in the French Alps. Visit Chamonix, Val d’Isere or La Plagne and enjoy world-famous winter sport resorts, skiing by day and enjoying the après-ski and rich French cuisine by night. For the best snow conditions, visit just after Christmas in January.

It’s no secret that wine is king in Bordeaux! Whilst the area’s vineyards come into bloom during the spring and summer months, winter is still a perfect time to visit the wineries to sample the plethora of vintages on offer.

The city is also adorned with sophisticated festive light displays, adding to the charm and magic of a visit during the winter. Most people visit during the summer and autumn, so taking a trip during the cooler months will give you a deeply authentic French winter experience. In fact, it’s one of my top recommendations of places to spend Christmas in France.

Despite being a small town, you might have heard of Menton before. This sleepy town is in a unique position on the Cote D’Azur, right on the border with Italy. It has a micro-climate a few degrees warmer than the rest of France, and people living there have access to the best produce in both France and Italy.

It’s particularly famous for the Fête du Citron, the Lemon Festival which takes place every February. This French Riviera town proudly celebrates its production of lemons and other citrus fruits during this special occasion.

You’ll see ornate sculptures dedicated to the fruits, carnival floats parading through the streets, and of course this passion for citrus is reflected at menus across the town. Visiting Menton for the Fête du Citron definitely makes for a unique and joyful winter experience.

Menton is also home to Mirazur, a Michelin starred restaurant said to be one of the best in the world.

Cannes is another great spot to enjoy a warmer winter in France. Like Menton and Nice, the city made famous for its film festival is also on the French Riviera. Why not embrace the warmer winter climate and wander along the beachfront? Or take advantage of quieter streets when out Christmas gift shopping in Le Suquet, Cannes’ Old Town.

This chic city has lots of beautiful hotels and villas, as well as a port filled with billionaires’ boat. If you’re interested in food, don’t miss a trip to Marché Forville – a bustling covered market with plenty of amazing produce on offer. Whatever you’re into, Cannes is a wonderful place to visit in France in winter.

Lyon is France’s third-largest city, and one of the best places to spend winter in France. Why? Look no further than the Festival of Lights, or Fête des Lumières.

Each December the Lyonnais and Lyonnaises honour the Virgin Mary through the display of candles, though evolution has elevated the tradition into a city-wide celebration. Light installations transform Lyon into an electrical spectacle that should not be missed.

Nature lovers flock to the Camargue during winter, much like the colonies of birds that attract them. Located near Arles, between the Mediterranean Sea and the two arms of the Rhône delta, the Camargue is renowned for its wildlife.

The pink flamingos hold centre stage during this time of year as their plumage grows ever more vibrant in preparation for the courtship rituals of spring.

You might also spot wild white horses, colourful birds and enjoy views of salt flats and countryside. It’s a surprising region, and one that’s not suffered from an influx of tourists, yet!

No list of the best places to visit in France in winter would be complete without Strasbourg, the home of the oldest Christmas market in Europe. It even has the nickname the ‘Capital of Christmas’, which I’d say it lives up to!

Sitting close to the German border gives Strasbourg an interesting cultural mix. It’s an undeniably romantic place to visit with your other half, as you wander the picturesque streets, stopping for mulled wine and snacks along the way.

There’s no denying that France is a special country to visit all year round, but in winter, the country really separates itself from any competition.

Christmas markets sprawl through charming neighbourhoods, warm cups of mulled wine are sipped outside artisan cafés, and adrenaline seekers bomb down the slopes of Mount Blanc in the east. So, where will you choose to visit in France in winter?

If you’d prefer to plan an adventure in the warmer months, don’t miss my guide to visiting France in summer.