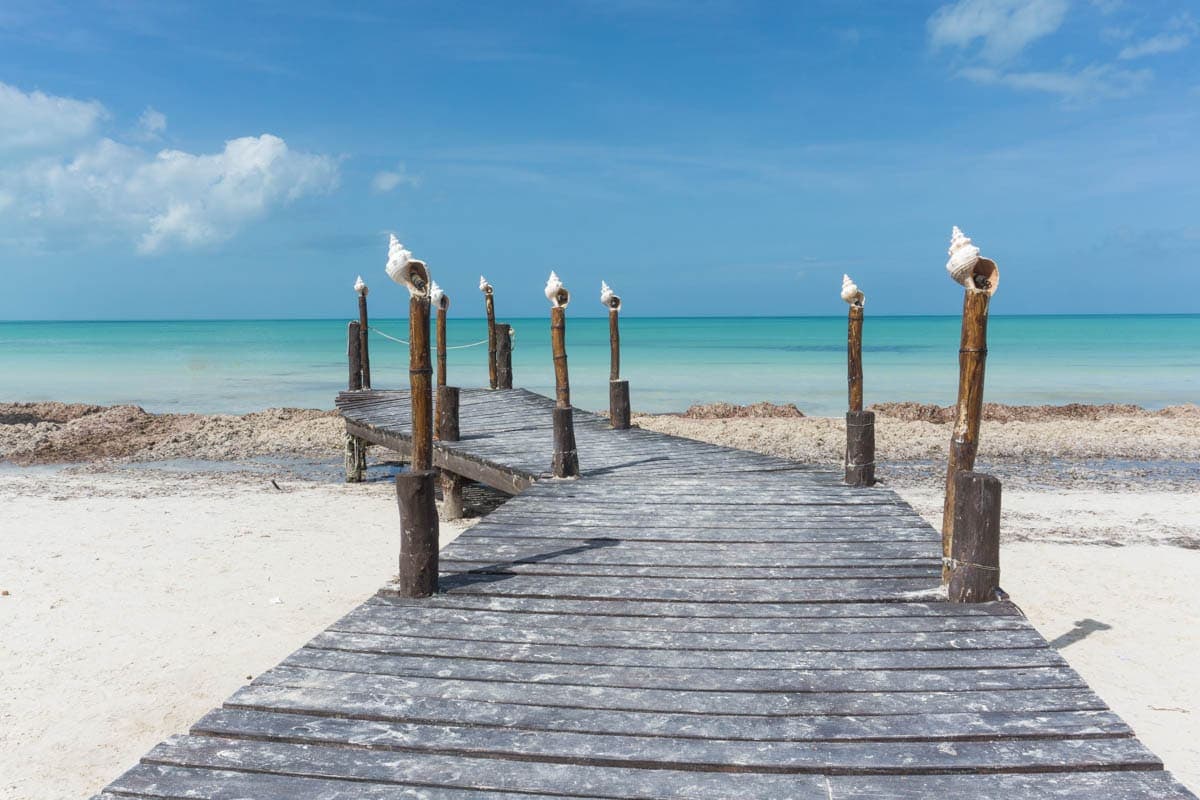 Whether you’re travelling from Cancun to Holbox directly, or from elsewhere in the country, find out how to get to Isla Holbox by bus, plane, car and bus.

Isla Holbox is one of my favourite places on the planet for relaxation, great weather and charm. It’s a mini paradise island, and just out of the way enough to not be overrun with tourists… yet!

I loved my time there so much that I wrote a mammoth Isla Holbox travel guide all about it. If you haven’t checked it out yet, it’ll definitely home in handy with your trip planning.

One of the biggest questions people have asked since is HOW to get to Holbox. So, first things first…

As you can see on this map, Holbox is located north of Cancun in Quintana Roo, at the top of the Yucatan Peninsula. While lots of the Riviera Maya is saturated with hotels and holidaymakers, this area is far enough away to have retained some real charm.

READ MORE: From swimming with whale sharks to checking out the murals, find out the best things to do in Isla Holbox

How To Get To Isla Holbox

There are several ways to reach Holbox. You could travel by car or public bus to Chiquila port and then catch the Holbox ferry across to the island. Or you can fly to the island by plane. Your plan will depend on where you’re coming from and how much you want to spend.

Travelling to Isla Holbox by plane

There’s a tiny airport on Isla Holbox, so you can reach the island by private plane. Most flights to Isla Holbox leave from Cancun airport, but you can also make arrangements to fly from Playa del Carmen, Tulum, Cozumel and Merida. The journey time is around 40 minutes, making it the quickest way to reach Holbox.

If you’re looking for cheap flights to Isla Holbox, you’re in for a shock! Prices start around 470 USD one way, and as the planes are small, there may be limits on how much luggage you can take. You can check out all the latest prices and info on the Flights Holbox website.

You’re guaranteed some incredible views too. These were snapped on a drone, but I figure they’ll be similar from a plane window!

The cheapest and easiest way to get to Holbox is by public bus. Rather than the collectivos (minibuses) you see all over Mexico, these are smart coaches run by ADO (Mexico’s main bus network).

If you’re wondering how to get to Holbox from Cancun, it’s pretty simple. The bus from Cancun to Chiquila takes around three and a half hours, and when I looked, tickets were between $180 MXN (9.50 USD / £7.48) and $300 MXN (15 USD / £12.50) depending on when you travel. The buses from Chiquila also go to Tulum, Playa Del Carmen, Valladolid, Merida and a few other places.

The buses drop you off at the ferry port in Chiquila, where you can buy tickets for the ferry to the island.

You can check out all the latest prices and info on the ADO website.

Approximate costs of buses to Holbox (including journey time)

Travelling to Isla Holbox by car

As with the bus routes, if you travel by car, the furthest you can get is Chiquila port, where you’ll need to park up and hop on the Holbox ferry.

From Cancun, it’s just two hours by car to Chiquila. Once in the town, you’ll need to find somewhere to leave your car. While none of it feels very official, there are lots of small car parks – i.e. enterprising locals letting you park in their yards/garages for a small fee!

We picked one and paid 100 MXN per day, paying at the end when we collected our car. Everything was fine, but I’d recommend you take any valuables with you, just for peace of mind.

There are two ferry companies operating between Chiquila and Holbox and funnily enough they offer exactly the same service, and cost the same price. The only difference really is that one runs on the hour, and the other on the half hour, meaning you’ll never wait long for the next boat.

The ferry to Holbox takes 15 minutes. We travelled on the Holbox Express on the way there, and caught the 9 Hermanos ferry when we left. Tickets for the Holbox ferry cost 150 MXN per person for adults, and $100 MXN for kids.

The ferries start at 5am and finish around 8.30pm. Check out the times and more info here.

Travelling to your hotel on Isla Holbox

When you step off the  ferry you’ll be greeted by a row of golf carts, ready to drive you to your Holbox accommodation. You’ll pay between 20-30 MXN (around £1) to be driven the few minutes across the island to the centre.

If you don’t have much luggage, then the walk to the main square takes less than ten minutes. I felt like hopping on a golf buggy was all part of the fun of visiting the island though!

If you’re visiting Isla Holbox as a big group or would like the option to self-cater some of your trip, I’d recommend taking a look at Airbnb. Usually the properties are owned by locals so you can enjoy an authentic experience and ask for lots of expert tips for the area. You can claim £35 / $45 off your first trip by clicking here.