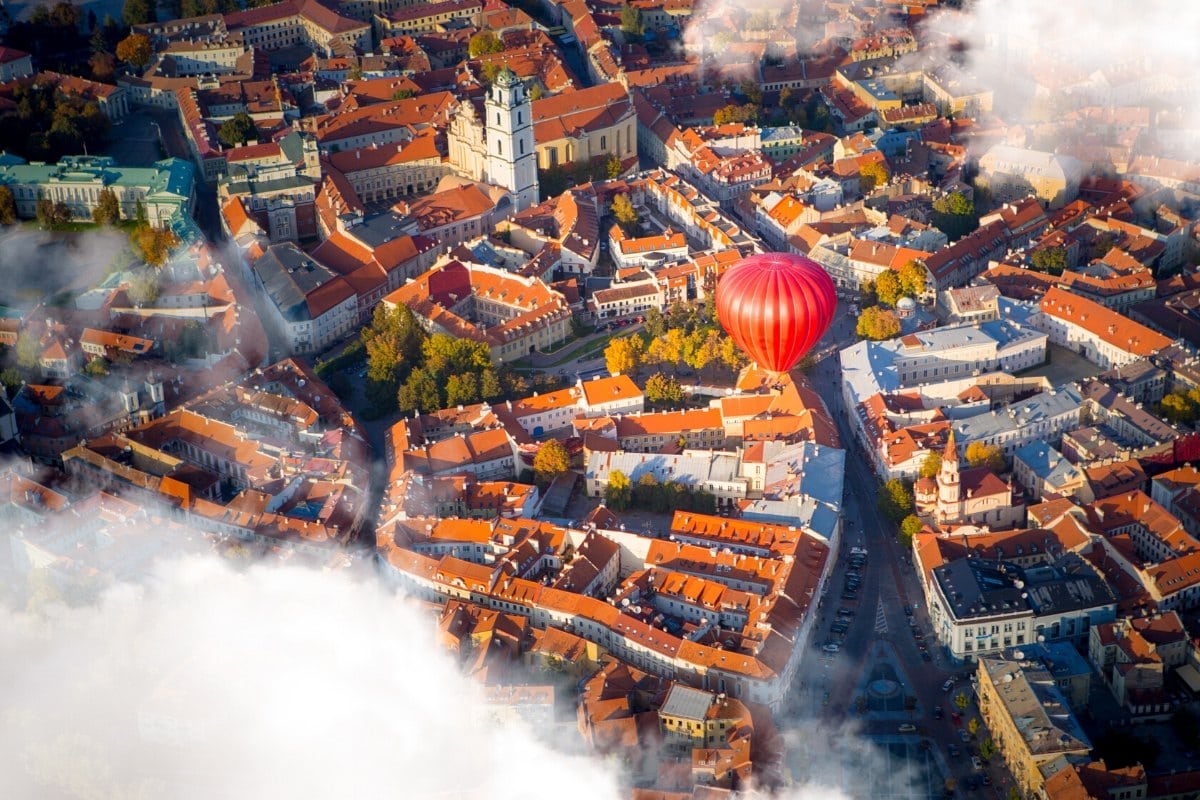 From exploring quirky capital Vilnius, and enjoying the local cuisine, to visiting the beautiful Trakai Castle, these are the top places to visit in Lithuania.

I think Lithuania is a very underrated country. It’s compact, historic and extremely pretty. Yet, in all honesty, when I told friends I was flying to Vilnius, I was met with rather blank expressions. Is that in Bulgaria? Romania? Poland?

I’ve travelled a lot over the last few years, but The Baltics had remained something of a mystery to me. They’re not obvious holiday destinations, and it’s rare they’re at the top of peoples’ bucket lists.

My trip around The Baltics took me from the delights of Vilnius, to Riga in Latvia, then on to Stockholm, Helsinki and Tallinn. I knew what to expect with Scandinavia, but the Baltics were a really pleasant surprise, and the trip opened my eyes to a few countries I’d love to explore further.

Lithuania is a seriously cool country. Cities like Vilnius are compact and walkable, with the fun and quirks of Berlin, the beauty of Stockholm and the history of St Petersburg. It’s still a relatively cheap country to explore too, so perfect for those travelling on budget.

But there’s more to Lithuania than its capital. Take a trip to Aukstaitija National Park and you’ll get a feel for the country’s serene countryside and natural beauty.

I visited around early summer and would recommend timing your visit for a similar time. Seeing the country bathed in sunshine, while enjoying warm temperatures sounds perfect doesn’t it? Autumn is also lovely, especially if you’re planning to venture out of Vilnius and explore the national parks.

If you can cope with cooler temperatures, there are plenty of great places to visit in Lithuania in winter, along with cute Christmas markets in the main cities. Just invest in some good thermals and prepare for snow from November onwards!

Best Places To Visit In Lithuania

From castles and national parks, to art galleries and museums, I’ve marked all my top recommendations on this map so you can plan your route. Don’t forget to scroll down to find out about each place…

Vilnius’s medieval old town is packed with beautiful architecture, large squares, tall spires and cobbled streets. While walking along the main street, I checked out the market stalls, which sold locally-made items including woolly boots and hats, cute bags, and jewellery.

I’d seen photos of Cathedral Square before, and was looking forward to seeing the tall white bell tower for myself. The bright white glowed against the blue sky. This is where crowds gather at Christmas and New Year, when you’ll also find an enormous Christmas tree!

If you’re looking for local tours within Lithuania, I’d recommend booking via GetYourGuide. The website is easy to use and the tours are of high quality. Some of my favourite tours within Vilnius include:

3-hour food tour of Vilnius – What better way to get to know the city than by eating your way around it, sampling lots of local delicacies!

Hot air balloon ride over Vilnius – The most magical way to see the city, by taking to the skies and flying over the city’s old town and famous sights.

Vilnius hop-on hop-off bus tour – A handy way to get around, and to get your bearings on day one in the city.

A must-do experience in Vilnius is the walk up the steep cobble stone path to Gediminas Tower, named after the Grand Duke of Lithuania.

The flag was hoisted in 1988 as a mark of Lithuania’s independence. While the red brick remains of the castle are a beautiful sight, the views of the city are even more special.

My favourite story about Vilnius is that it is home to an independent republic named Užupis.

The area has a bohemian vibe, with street art, sculptures and a swing hanging from the main bridge. I loved it – although it felt like it could have been lifted from a Monty Python sketch! I was so taken with the area, I decided to have lunch (traditional chicken kiev for 8 Euros) on the terrace at Uzupio Kavine, overlooking the River Vilnia.

I love places like this!! I went to similar museums in Malaysia and Dubai, and they always surprise me! The Vilnil Museum of Illusions is filled with rooms and exhibits that play with your mind.

There are 3D pieces, optical illusions which play with perspective and rooms which make you question what is real! Ever wanted to walk up the wall? Here you can! Take lots of photos too – although don’t blame me if your friends and family don’t believe they’re real!

En-route to Riga we were lucky enough to visit 14th Century Trakai Castle, which sits on an island on Lake Galvė. A real-life fairy-tale castle – it’s one of the most photogenic places I’ve visited in a long time.

Options on offer include touring the castle, sailing, hiring a pedalo or enjoying a coffee with the view of the lake. It’s easy to see why this is one of the top places to visit in Lithuania!

It’s a really easy half-day trip from Vilnius, in fact there are plenty of great tours which take you there, give you the history and allow you time to wander around and explore. As mentioned, GetYourGuide offer informative and well-run tours across Lithuania.

One of the prettiest places in Lithuania lies a few hours northeast of Vilnius. Aukstaitija National Park is a huge national park filled with a mix of beautiful pine and spruce forests, as well as plenty of hills and over a hundred lakes and rivers. Visiting the national park is a real step into nature, with chances to see lots of amazing animals including deer, elk, wild boar and plenty of birds.

It’s a great place to go hiking, or you can enjoy water activities on one of the many lakes. Along with immersing yourself in nature, you could combine your trip with exploring some of the old villages, which are home to farms, water mills and traditional houses.

The Hill of Crosses in Siauliai is one of the eeriest places to visit in Lithuania. While it’s believed the first crosses were placed there around 1831, the number increased as Lithuania struggled with independence in the 1900s… particularly when occupied by the Soviet Union. People travelled to the area and left crosses as a silent protest. While many were removed during Soviet times, double or triple the number started to appear daily.

In 1993, it received the biggest praise of all, when Pope John Paul II paid a visit and blessed the site. You can still add to it too… I actually chose to leave my own cross (signed with my name)! Also while I was there there I saw wedding and funeral parties arriving to take photos – it was strange, but beautiful in its own way.

It’s really easy to visit the Hill of Crosses on a day trip from Vilnius. I’d recommend this tour in particular, which includes a tour, transport and takes you to a local restaurant for lunch.

Lithuania’s second largest city is another great place to add to your itinerary. It has an interesting location, sitting on the spot where the country’s two largest rivers, Neris and Nemunas, merge. It has a pretty medieval old town (smaller than the one in Vilnius) which is well worth a visit, as well as Kaunas Castle, which is like a tiny version of Trakai Castle. It’s also a university city, so you’ll find plenty of cool bars and cafes in the centre.

Head inside the forests of Dzūkija National Park and you’ll discover something intriguing– a glass dome around a pyramid. It’s known for its spiritual qualities and people visit to feel its energy. The story behind it? In 1990, a family visited and the son believed he experienced a miracle!

As he grew up, he decided to construct the aluminium pyramid to mark the location of the revelation. The glass dome is a recent addition. Lots of people make the pilgrimage to the pyramid, with many reporting to have enjoyed healing effects or mood improvements after the trip. Who knows if it really works, but if there’s something you’re wishing for, maybe it’s worth a try?

If you don’t have your own transport, Dzūkija National Park is pretty challenging to get to. One option is to book this private tour, run by a professional tour guide, who will take you to plenty of great sites and teach you all about the region.

One of the most unusual places to visit in Lithuania, The Dead Dunes are the tallest migrating dunes in Europe. When I say migrating, I mean it! They’ve even swallowed up several small villages over the years. Known as the Curonian Spit, the phenomenon has been created by strong winds and sea currents, which have in turn created the narrow spit of sand between the Curonian Lagoon and the Baltic Sea. Some of the sand dunes are a whopping 60m high with lovely sandy beaches at one end.

It’s been declared a national park by both Lithuania and Russia (it spans both countries), as well as a UNESCO World Heritage Site, as the region of Nagliai Nature Reserve is of historical significance, as well as being home to several rare plans.

One of the focal points in Vilnius, construction began on the city’s impressive cathedral in the 13th century. Sadly there were several fires over the years, so the structure you see today, was built at the start of the 1800s. The Cathedral of St. Stanislav and St. Vladislav is the most important Catholic place of worship in the country.

If you’d like to visit the cathedral, check the website for when mass is taking place, as you can’t enter during those times. There are three English-speaking tours each week, held on Tuesdays, Thursdays and Saturdays at 4pm.

I’d also recommend a trip to the top of the 52m tall bell tower. The white tower is a symbol of the city, and the views from the top are really special.

And Finally… Feast On Some Traditional Lithuanian Food

After your days exploring or visiting the country’s attractions, be sure to visit some traditional Lithuanian restaurants to try these delicacies…

Kibinai – A type of pastry, a bit like a Cornish pasty!

Balandėliai – Cabbage stuffed with minced meat and smothered in a tasty tomato sauce.

Bulviniai blynai – A type of fried potato pancake, a bit like a rosti/hash.

Whether you’re visiting the Baltic states for the first time, or looking for new places to explore, I hope this guide helps you plan your trip.

You can read more about one of my trips to Lithuania here. Let me know your highlights in the comments below.