Planning a trip to Morocco’s red city? Create your own Marrakech itinerary with these quirky places in the city!

Whether you’ve got your flights booked, or you’re looking for inspiration, planning a trip to Marrakech is always a fun thing to do! The city offers so much. From the bustling market stalls in the medina, to the beautiful YSL gardens.

For lots of tips on where to visit on a first trip, check out my guide to the top places to visit in Marrakech.  Once you’ve added those to your Marrakech itinerary, it’s time to spice things up with a few quirky spots you might not have considered before.

From a super cool party spot, to a beautiful place to stay and a great cooking school, you’ll struggle to choose what to do next! 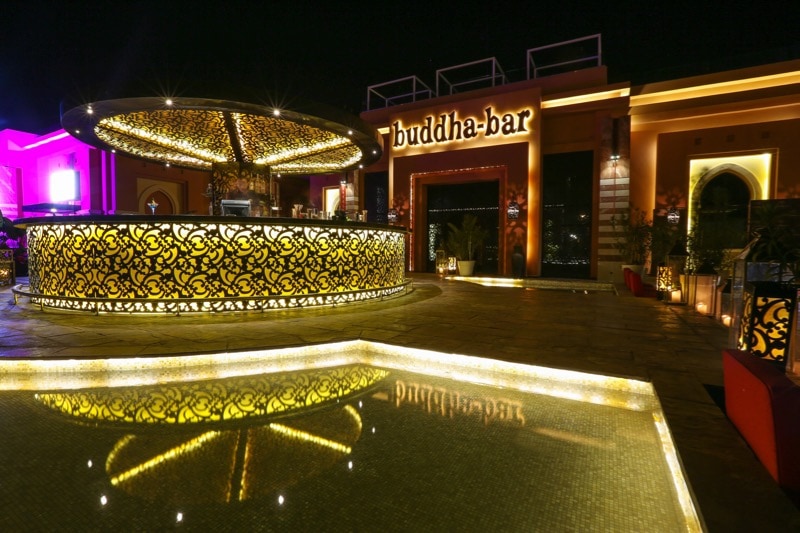 Warm sunshine, refreshing cocktails, delicious Asian tapas, all set to the chilled beats of ethereal house music. It’s official – spring has sprung in one of my favourite cities, Marrakech!

High season has arrived, bringing with it tourists from near and far. After hours exploring the incredible sights and sounds of the medina, Jemaa el-Fna Square and taking in the colour and culture of the city, the chic new terrace at Buddha-Bar is the perfect place to unwind.

Thankfully the cocktails are a LOT better than the ones I made with expert barman Houssam in January! Top new creation Tikech is a subtle blend of Pink coral flower, coconut water, passion fruit and pineapple – one sip of that and you’ll know not only that spring is here, but that summer isn’t far away either. 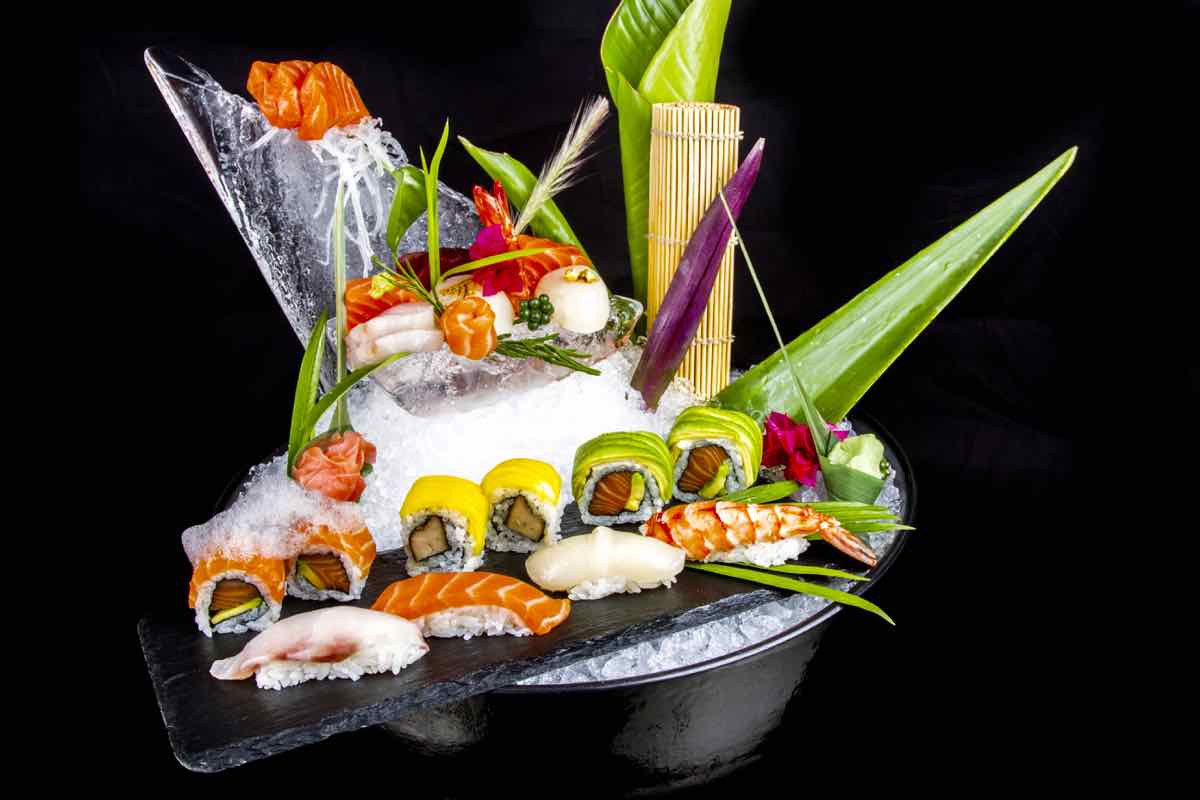 Testing out my sushi making skills at Buddha-Bar Marrakech.

They say it takes years of training to become a sushi master. I had only a few hours, but I was determined not to make a fool of myself. The setting? Buddha-Bar Marrakech – the city’s hottest new bar and restaurant.

My Buddha-Bar experience started here, with a delicious dinner of Asian fusion dishes. After enjoying it so much, I was invited back the following day to don an apron, and spend some time learning from the masters. It wasn’t just about sushi, I also had the chance to test out my pastry skills too!

Check out the video of my luxury weekend in Marrakech and scroll down to read all about it! 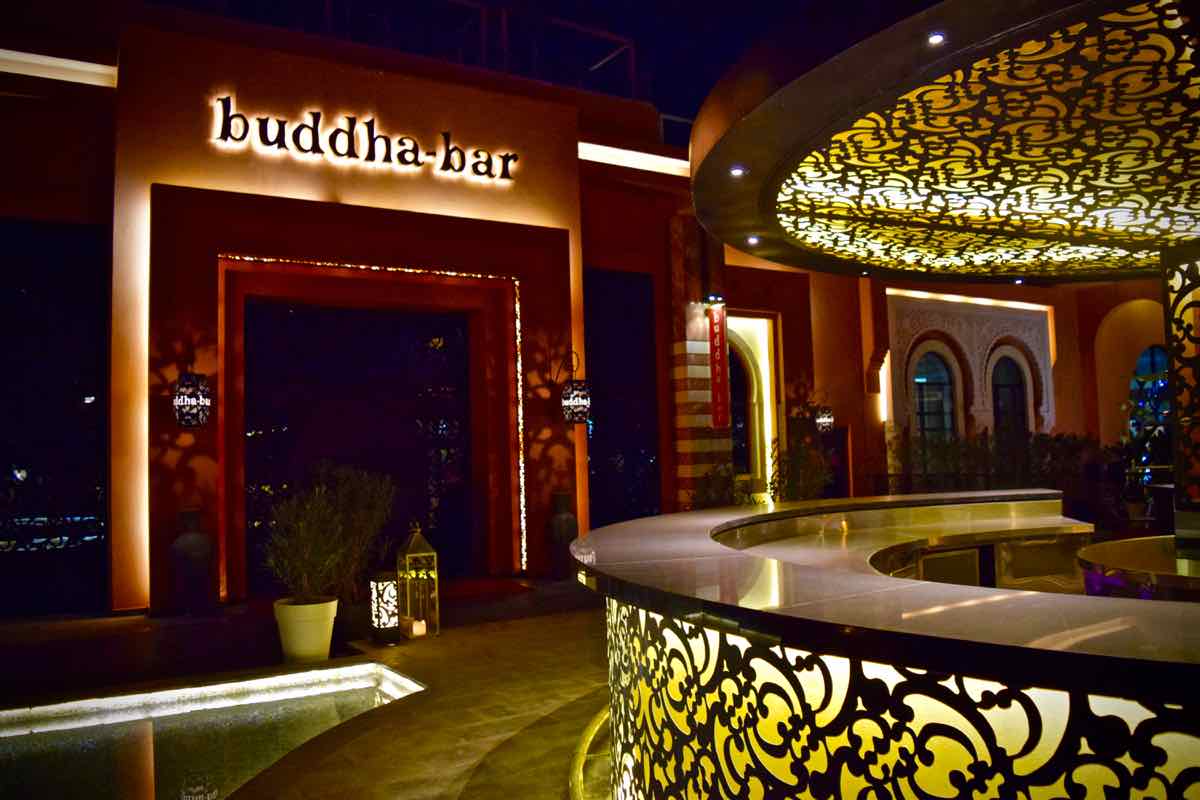 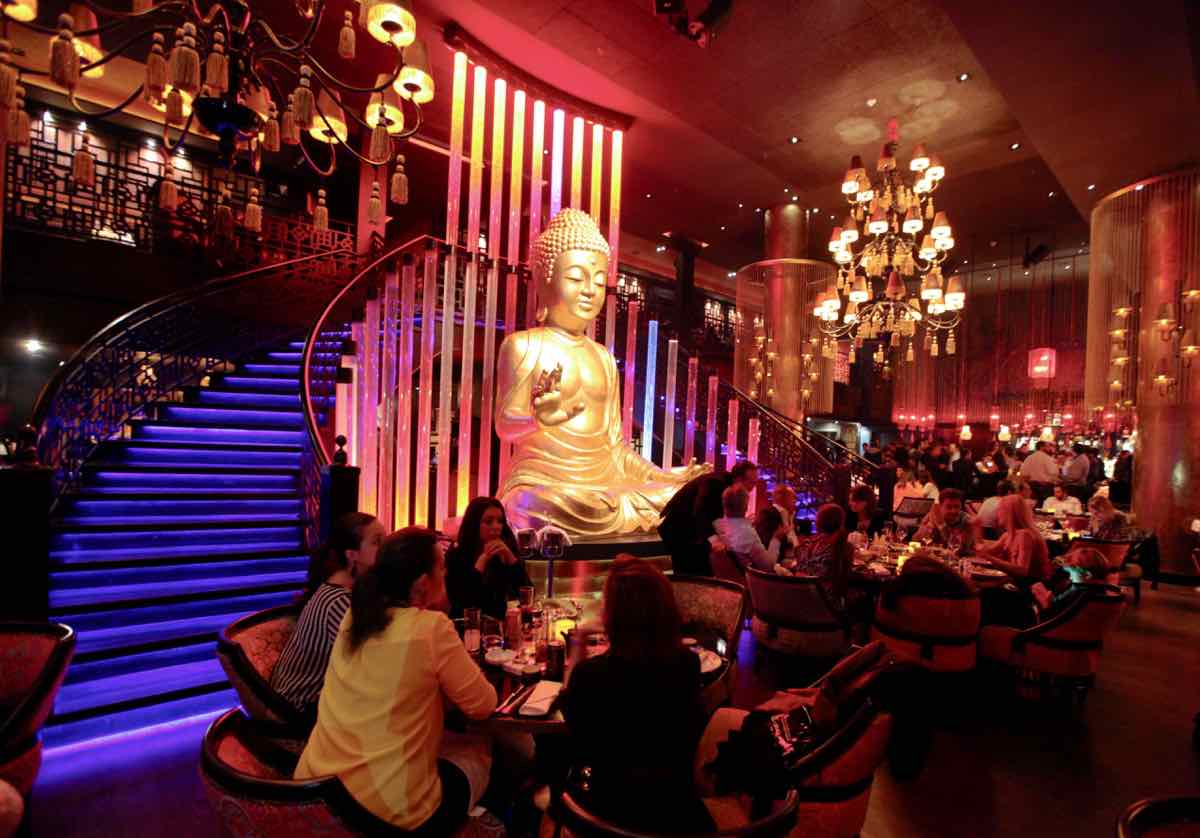 I love the buzz of a professional kitchen. Considering the high level of stress, I’m always amazed at how tidy they are. Between 4-7pm, the stark white polished kitchens of Buddha-Bar were a hive of activity, with sushi rice being prepped, ice cream being churned and pastry being baked. Piles of sliced spring onion and strips of avocado lay ready to be rolled into sushi, while across the room the deep fat fryer was crisping up some spring rolls. The air was rich with the scent of ginger, garlic and chilli, and several sous-chefs were busy on prep duty. It’s easy to lose sight of how much labour goes into creating one gourmet dish, but as I stood there, I appreciated the previous night’s meal even more. 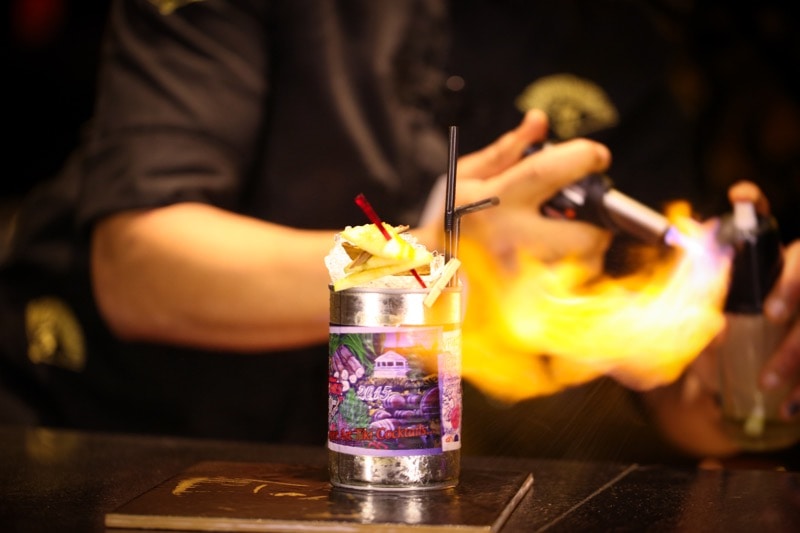 Fancy shaking up some cocktails at a brand new mixology festival?

In January, I popped over to Marrakech for a weekend of sunshine and pampering. After an exhausting Christmas (my 4 nieces and nephews sure kept me busy!) I was in need of a few days of relaxation, good food and the company of one of my best friends. It certainly hit the spot. 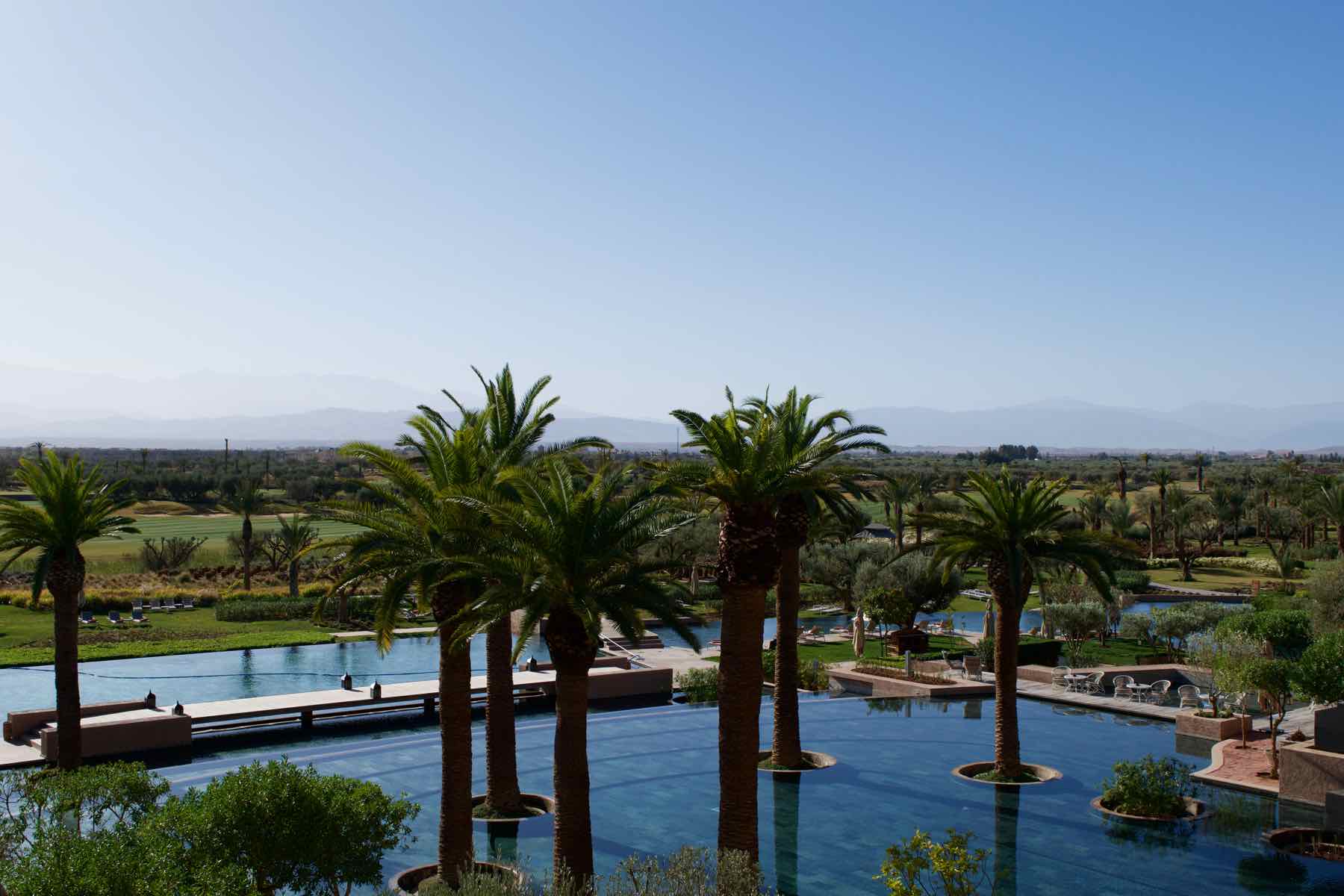 Forget New York, Marrakech is my new favourite city that never sleeps. From its international film festival every December to Marrakech Bienniale (it successful arts festival) in the spring, there’s plenty going on.

As I wrote in this blog, Buddha-Bar Marrakech was a great find in January. Serving some of the best Asian-inspired food I’d ever eaten, and with a top team of mixologists, I ate and drank my way merrily through the weekend! Good news, to add to Marrakech’s constant stream of events and festivals, Buddha-Bar are launching a Mixology & Cocktail Festival.

Time to check out Buddha-Bar Marrakech.

*DISCLAIMER: I worked on a sponsored campaign with Buddha-Bar in 2016, for which I produced video, blog and social media content about Marrakech and the restaurant. Sadly Buddha-Bar Marrakech broke their contract and only paid me for half of my work and time. After I threatened legal action, they stopped returning my emails and calls. I have left the content live, as I was proud of the work I did, but I find their behaviour utterly disrespectful, and would never return there out of principle.*

Towards the end of 2015 I spent a few weeks travelling around Morocco. While I’ve visited the country a few times before, this was more of an immersive trip – sleeping in camps in the Sahara, visiting local markets high in the Atlas Mountains, and finishing with the full Marrakech experience – snake charmers, hammams and more! I thoroughly enjoyed it and hoped it wouldn’t be long before I returned.

Cheap flights and guaranteed warm weather make Marrakech a great break from the UK, particularly for those craving winter sun. With a free weekend in January, I couldn’t resist but snap up some bargain fights and pop over for a dose of vitamin D, great food and a bit of pampering.

Buddha-Bar is Marrakech’s newest opening. As a brand, Buddha-Bar is synonymous with style, music and great Asian-inspired food. With restaurants in Paris, London, Beirut, Dubai, Sao Paulo, Kiev and many more, it was only a matter of time before Marrakech was added to its mini-empire.

Check out the video of my luxury weekend in Marrakech, or scroll down to read more about Buddha-Bar Marrakech. 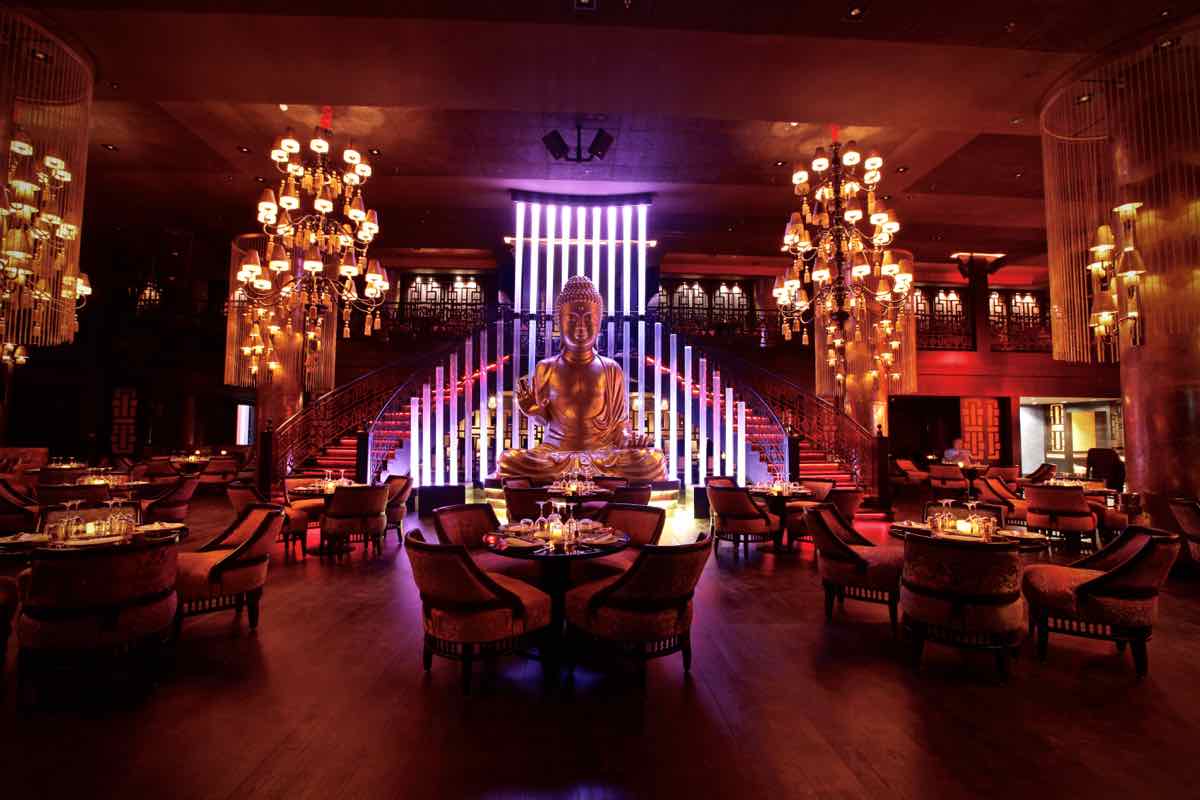 Don’t be fooled by the name. Buddha-Bar is more than a bar, it aims to take you on a journey – through its music, décor and menu. Not just another night out, it’s longing to be a memorable experience, ideally one that you’ll choose to return to time and time again. Only a handful of brands have achieved this globally – Pacha perhaps, and high-end hotels such as the Four Seasons.

January is supposedly a low season in Marrakech, but with constant traffic, and Jamaa El Fna square as packed as ever, it wasn’t particularly noticeable.

Buddha-Bar Marrakech sits in the chic Hivernage area. L’hiver being French for winter, the district made its name as the place the wealthy French holidayed during winter. Home to the majority of the city’s top boutiques, 5 star hotels (including Es Saadi Gardens and Resort where I stayed last time), it’s the area both to see, and be seen in. With Buddha-Bar’s signature branding, latticework, lanterns and a swanky red carpet, I couldn’t WAIT to get inside – particularly with the bass of the deep house soundtrack pulsating from within.

Surprisingly, and perhaps bravely, this is one of Marrakech’s largest restaurants. With seating for around 450, it’s an enormous space. Yet despite high ceilings and masses of seating, it doesn’t feel cavernous. Quite the opposite in fact – with its dark mood lighting, ambience and personable service, there’s a rather magical feeling of intimacy. 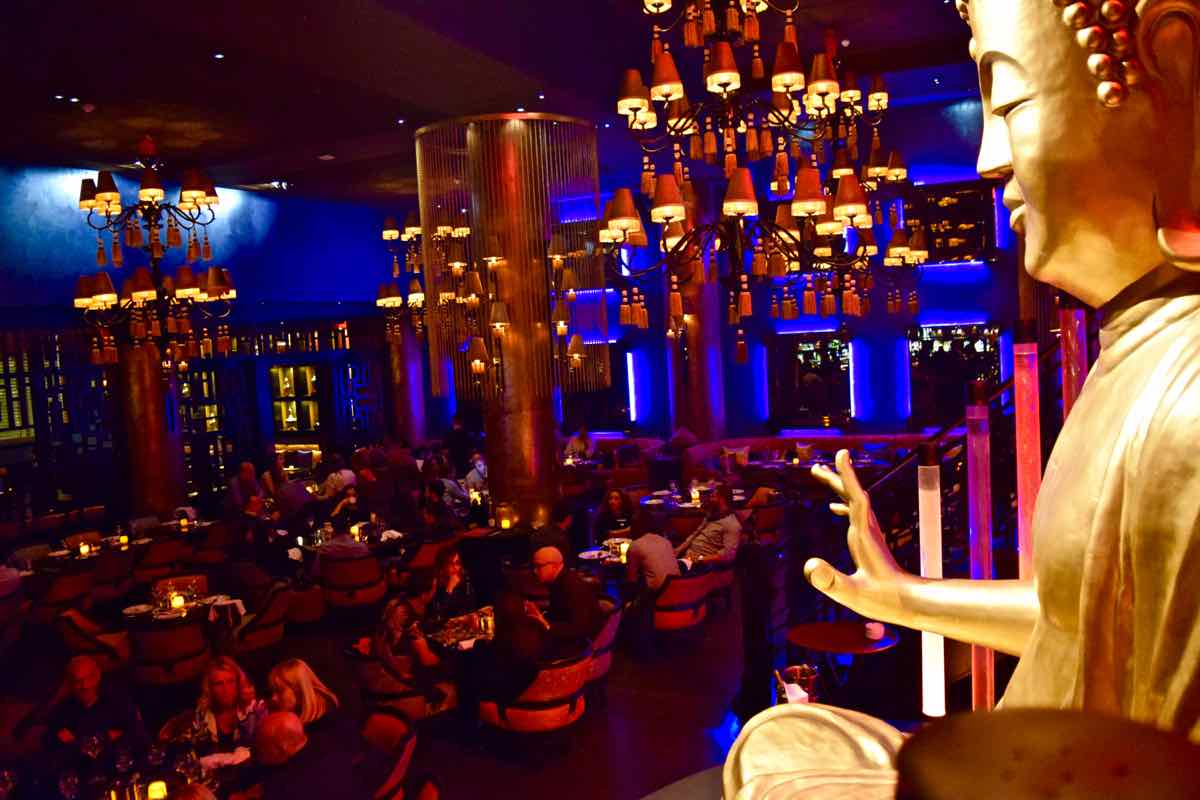 Once through the enormous ornate doors, there was one person in my eyeline… Hello Buddha! Transported from Indonesia, the 4 metre high figurine sits proudly with grand illuminated staircases cascading down either side. 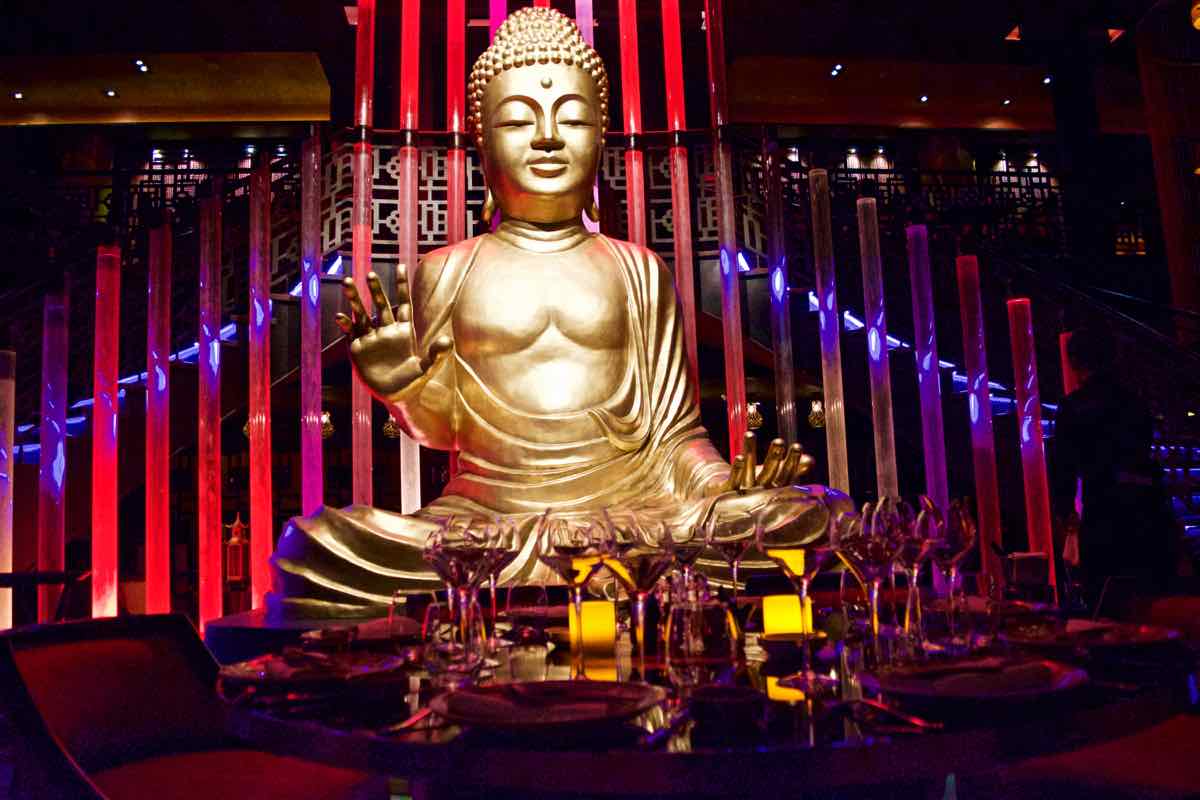 The building is cleverly divided into several areas. From the main dining room, to the lounges, salons, private dining rooms, high tables and bar area. While each has its own distinct vibe, the colour scheme of blue, red, gold and black creates a feeling of unity. Oriental patterns, lush silk and plush velvet all work to create a mysterious, sophisticated restaurant.