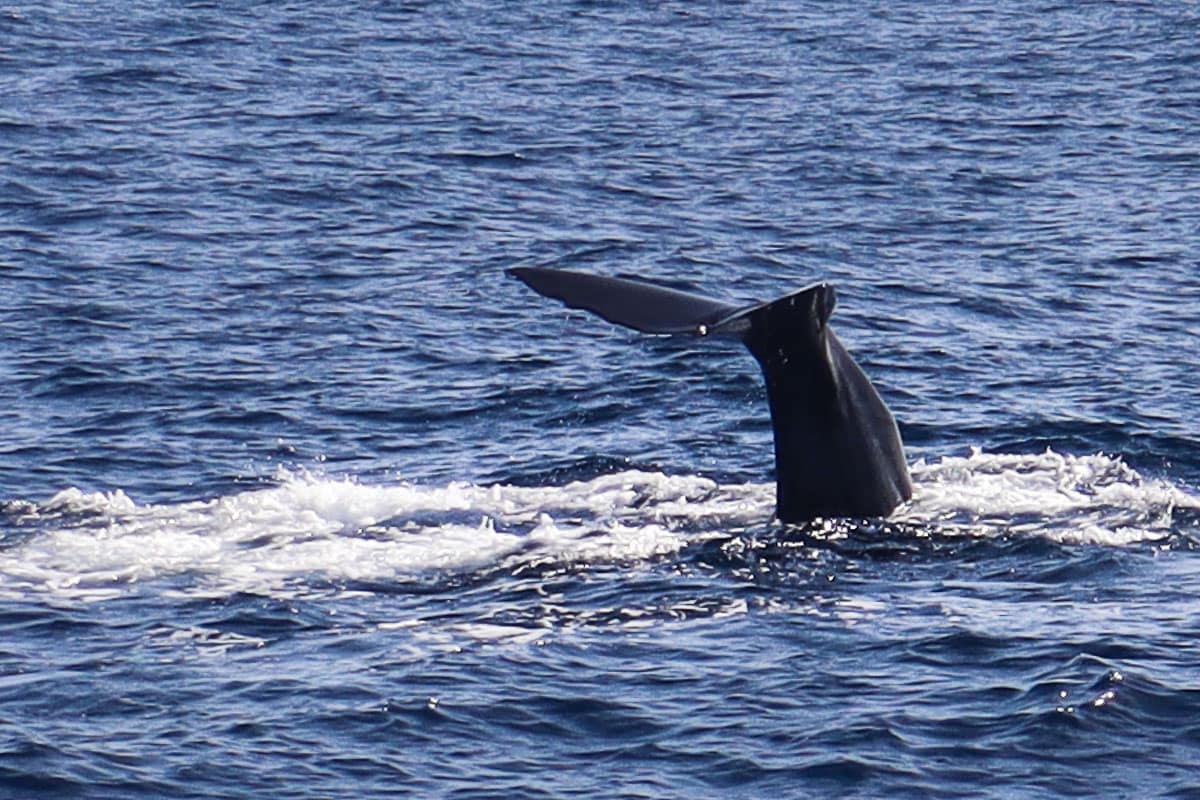 Dominica is one of the best destinations in the world to see whales in their natural habitat. Find out all about whale watching in Dominica, what to expect on the day and a few tips to make the most of your trip.

Anticipation was high as we stepped foot on the Sting Ray II for our whale watching tour. While the captains will never say sightings are guaranteed, they’re pretty common. I was SO excited, but also apprehensive – what if we’d come all this way and returned disappointed? In my head, I’d already decided that wasn’t going to happen.

Dominica is known as the whale watching capital of the Caribbean. Over 20 species of whale have been spotted in the waters around the island, but the big draw is the pod of sperm whales. There are said to be around 300 in total, and from what I’ve read, Dominica is the only country in the world where they can be spotted all year round.

In general I avoid animal experiences and tours, as I worry about the impact they have on the creatures. I was pretty traumatised after seeing dolphins and sharks in a swimming pool in Mexico, and being told ‘they love it in there’. Thankfully in Dominica the tours are highly regulated, with boats having to follow a strict code of ethics. They never entice whales or dolphins to the boats, and give the creatures lots of space. Unlike some destinations where several boats crowd the same spot, we were the only tour boat around.

So what did I think of the experience? It was INCREDIBLE! Utterly amazing! A total highlight of my time in Dominica! On our trip, we spotted three sperm whales – an incredible moment I’ll never forget!

Oh and while we may have been on a ‘whale watching tour’, it seemed to turn into a ‘dolphin watching tour’ on the way back… as we were treated to a show by a huge pod of dolphins. They jumped and dived by our boat, and pretty much escorted us back to dry land!

So, if you’re considering booking a whale watching tour in Dominica, I thought it’d be helpful to share a little more about my experience.

What Happens On a Whale Watching Tour In Dominica?

There are a few companies offering whale watching tours. The one I went on left from Dive Dominica in Roseau, but I know there are others based around Portsmouth too.

At the start of the boat ride, the captain and crew told us about the different whales and dolphins that had been spotted in the past. We learned what to look for – spouting water in the distance and birds hovering overhead. They couldn’t guarantee a sighting, but they seemed pretty confident!

At various times, we stopped in the middle of the ocean to drop the hydrophone – a special piece of equipment with a 7km range, which is used to detect underwater sounds. The crew donned headphones and listened for the clicking sounds that are created by sperm whales.

Once there’s a sighting, the boat gets as close as is permitted (there are strict rules in place so as not to disturb the creatures), and the guests on board enjoy the show, snapping photos, enjoying the splashes in the distance, and watching the incredible creatures in action. Usually the tours last around three hours, and include water throughout, plus a celebratory glass of rum punch on the way back.

Which Species Of Whale Have Been Spotted In Dominica?

Over 20 species of whale have been spotted in the waters around the island, with the most common including short-fin pilot whales, false killer whales, melon head whales, pygmy sperm whales, and humpback whales.

The pod of sperm whales is the biggest draw though. With temperatures pretty constant, and plenty of sheltered bays along the west coast, it’s a safe, comfortable environment for the whales to breed.

Along with whales, dolphin sightings are common too. You’re most likely to see pantropical spotted dolphins, Fraser’s dolphins and bottlenose. I couldn’t believe how many we saw on our return to shore! They put on such a show, playfully jumping and following the boat through the ocean.

Why Are Sperm Whales So Impressive?

Before the excursion I didn’t know much about sperm whales, but I’ve now developed a real love for them! They’re very impressive… they’re the largest toothed predators on earth, reaching up to 18 metres long and weighing up to a whopping 50,000kg.

They’re also said to have the largest brain of any living creature. They love diving down, and are known for the incredible depths they reach – up to 2,000 metres. Down there, they feast on their favourite food – squid!

They have a bizarre appearance, being quite chunky with a block shaped head, a hump on their back plus an elegant tail. As for the name? They get that from an organ in their heads that contains an oil which hunters thought resembled semen.

They usually stay around the surface of the water for around ten minutes, which is when you can spot them spouting through their blowholes. Then it’s time for a flip of the tail, as they dive down to the dark depths of the ocean.

When Can You See Whales In Dominica?

As mentioned, whales are spotted all year round, but sperm whale sightings are most common between November and March. However, if you’re visiting outside of these months, don’t be put off! I visited in July and was lucky enough to see three sperm whales and several pods of dolphins. It was absolutely incredible! Here’s a little flavour…

How Much Is A Whale Watching Tour?

There are several tour operators in Dominica, but the tour I went on cost $69 USD per person (approx. £55 or 186 Eastern Caribbean Dollars). That included the three-hour tour plus water and rum punch.

There are also tours like this one which combine the whale watching tour with a guided tour of the island.

Is It Possible To Go Whale Watching If You Visit Dominica By Cruise Ship?

Yes – but you’ll need to book your tour via your cruise operator as part of their optional excursions. That way they’ll make sure the timings work and organise transport to and from the cruise port in Roseau.

Can You Swim With Sperm Whales In Dominica?

Yes – but it’s not a simple process, and isn’t possible on a whale tour like the one I went on. Swimming with Dominica’s sperm whales is highly regulated, and a licence for six people costs around $3,000 per day. They only issue a few of these pricey ‘golden tickets’ per year, so as not to disturb the whales.

The Financial Times sent a journalist to freedive with sperm whales recently! I really enjoyed reading this account of his experience.

What To Bring On Whale Watching Tour In Dominica?

Suncream
Sunglasses
Water
A hat
Camera (ideally a camera with a good zoom lens)
Something to cover up with if the sun gets intense
Seasickness tablets (if you usually require them)
Positive thoughts!

The whale watching boats have an upper and lower deck, and there are plenty of covered areas incase you’re worried about getting sunburnt.

A whale watching tour is an absolute must do if you’re visiting Dominica!

Looking for other things to do on the island? Read my Dominica travel guide now.