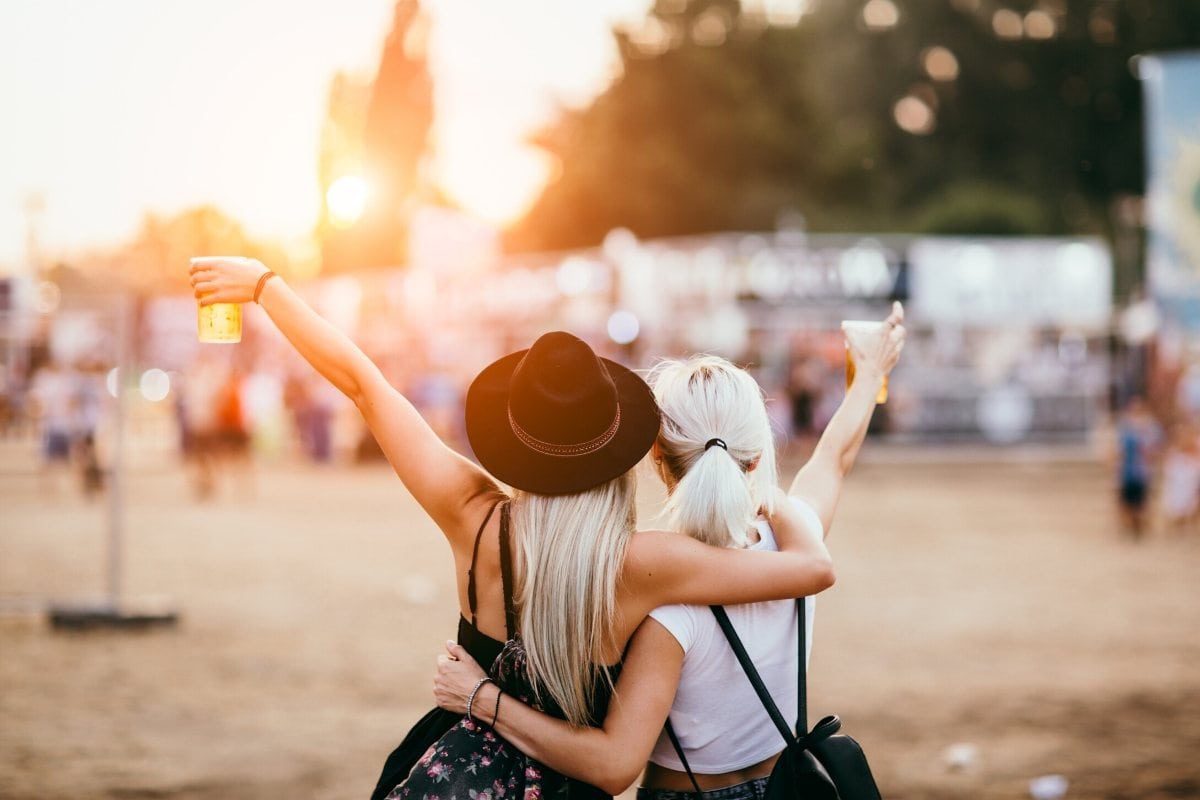 Find out about the most popular music festivals around the world, including Glastonbury, Coachella and the New Orleans Jazz Festival.

Jazz, hip hop, electronic music, pop, indie, rock… the list goes on. Whatever you’re into, there’s a music festival for you. Along with the most popular music festivals around the world, there are plenty of smaller niche ones too.

I have endless happy festival memories. I’ve spent days dancing in Ibiza to the world’s top DJs pumping out electronic music mixes. I’ve enjoyed lazy park days enjoying acoustic acts as the sun shone down. I’ve moshed to indie acts from my teenage years, and I’ve sung my heart out to Stevie Wonder as the sun set in Hyde Park.

All of these experiences have created warm, fuzzy feelings in my tummy when I think about festivals.

While we might not be planning a big festival outing right now, there are plenty of festivals selling tickets online for later dates. I’ve only been to a few festivals abroad, but I think all of these on the list are worth travelling for… and hey, it’s nice to dream!

The Most Popular Music Festivals Around The World, Worth Travelling For

Glastonbury is without a doubt one of the most famous and most popular music festivals around the world. Around 200,000 people attend, camping in and around Worthy Farm in Somerset in England.

While it’s known for hosting an eclectic mix of megastars from the world of rock, pop and indie music, the festival represents all areas of the art scene, with comedy, theatre, dance, spoken word and more.

It’s got a hippie vibe and the environment at its heart, and has even won awards for its green approach to festivals. Big names to grace the Glastonbury stages in recent years include The Who, Adele, Jay Z, Lionel Richie, Florence and the Machine, The Killers, Alt-J, Kylie Minogue and The Chemical Brothers.

Where: Somerset, England, UK
When: Usually end of June (cancelled for 2020)

One of the most popular music festivals around the world, Coachella Festival takes place in the Coachella Valley in the Colorado Desert. As opposed to one continuous festival, Coachella takes place across two consecutive weekends, usually with almost identical line ups.

The most recent festivals were attended by 250,000 music lovers, flocking to the desert to see the biggest names in rock, pop, indie, hip hop and electronic dance music.

It’s a festival synonymous with fashion too. An Instagram dream of a festival, with girls spending weeks planning cute outfits for their weekend in the desert, riding the colourful ferris wheel and uploading snaps as they go.

Where: Indio, California, USA
When: April

If you fancy travelling to a seriously cool destination for a music festival, how about Fuji Rock in Japan? This summer music festival takes place in a ski resort a few hours from Tokyo by train. Last year saw The Chemical Brothers, Sia, The Cure and James Blake headline.

The festival is still scheduled to take place this August, but keep an eye on the website for updates!

Where: Naeba Ski Resort in Yuzawa, Japan
When: August

Tomorrowland is one of the most popular music festivals in the world, and is perfect for those who love to PARTY! It takes place every summer in Belgium and has a focus on electronic dance music. Last year’s festival was attended by over 400,000 people and featured the world’s top DJs and music producers.

With Tomorrowland being such a success, a few spin-off festivals have now taken place around the world. The festival’s online music ticketing site often crashes the day that tickets go on sale, so if you want one, you’ll have to have ninja fast fingers!

Where: Boom, Belgium
When: July

Since visiting this amazing city, I’ve been dying to return for the New Orleans Jazz Festival. One of my favourite things about New Orleans is how much music there is on the streets. Incredible buskers rock up and play a few tunes, and you can’t help but stop and watch. I felt like there was this special audio soundtrack playing as I wandered around the French Quarter.

The festival has been running since the 1970s, and has featured jazz legends such as Duke Ellington, Fats Domino and Mahalia Jackson. In terms of crowds, it’s grown from something pretty small and niche, to a huge ticketed event attracting over 450,000 people in 2019.

Where: New Orleans, Louisiana, USA
When: Usually April – May (this year’s festival has sadly been cancelled)

Another of the most popular music festivals around the world, The ACL Music Festival is another that is spread across two weekends. Taking place in October each year, this top American festival features rock, indie, country, folk and electronic music, and is definitely worth travelling for!

Last year’s festival was the biggest yet, with over 450,000 attending across the two weekends. As for the acts, they don’t get much bigger, with Metallica, the Red Hot Chili Peppers, Guns N’ Roses, Arcade Fire, The Rolling Stones and Radiohead among previous headliners.

It’s a family friendly music festival, with a mini-fest for kids plus plenty of great food stalls too.

Primavera Sound is one of the most popular music festivals around the world, especially when you realise that actually it’s now two separate festivals! Yep, this festival outgrew its incredible home in Barcelona, and now has a second festival hosted in Porto, Portugal too.

There’s usually an eclectic mix of music acts on the bill, including pop, rock, indie and electronic music. Sunshine and music = what’s not to like?

Where: Porto, Portugal and Barcelona, Spain
When: May / June

Another beautiful scenic spot for a music festival, Sziget Festival takes place on Old Buda Island, a gorgeous island right on the River Danube. It’s popular with tourists across Europe, particularly Brits, Germans and Italians, who treat their festival visit as a week-long holiday.

Last summer’s festival was attended by more than 500,000 people, and included appearances by Ed Sheeran, Foo Fighters, Martin Garrix, The 1975, Years & Years and Catfish and the Bottlemen.

Where: Budapest, Hungary
When: August

The Governors Ball was launched in 2011, and takes place each year on Randalls Island in New York City. Similar to many of the most popular music festivals around the world, this one also features music spanning a number of genres, from rock and electronic, to folk, hip hop and pop.

It’s one of the coolest New York festivals (and the largest music festival in the region too), and offers a great escape from the city for many locals. Foodies love it too as a lot of New York restaurants have stands, plus there are a number of great food trucks for when you get hungry!

Where: Randalls Island, New York, USA
When: Beginning of June

This is more than just a music festival; it’s described as a party for all five senses, combining an eclectic line up with world class art, food, wine and more.

The music line up is an interesting mix of indie, rock, acoustic and electronic acts, which last year saw Blink 182, Flume, Kygo, The Lumineers and The Neighborhood all on the bill.

Along with the music, there are areas such as the Wine Lands and Beer Lands, where you can sample locally produced wines and beers, plus the Gastromagic stage which plays host to chefs and comedians, who create weird and wonderful collaborative shows. I’m intrigued enough to want to get on a plane right now!

Where: San Francisco, USA
When: August

You might be familiar with the Ultra brand. It’s got a reputation for being one of the top electronic music festival brands in the world, with events taking place from Miami and Brazil, to Bali and Singapore.

Ultra Europe is one of the most popular dance music festivals in Europe, and takes place in Split, Croatia. It’s one big party, with huge name DJs and producers on the line up from the world of house music, techno, electro and drum and bass. This year’s bill includes Armin Van Buuren, Steve Aoki, Maceo Plex and David Guetta.

Where: Split, Croatia
When: July

When it comes to the most popular music festivals around the world, Lollapalooza is right up there! Taking place in Chicago every summer, this fun, colourful festival is a celebration of happiness.

With eight stages, and over 170 bands from all over the world, it’s a great reason to visit Chicago in the summer.

After becoming such a hit, the organisers have expanded to international festivals, with events in Chile, Brazil, Argentina, Germany and Sweden. I can’t wait to attend one soon!

Where: Chicago, USA
When: End of July / start of August

Can you imagine a more beautiful setting for a festival than on the banks of Lake Geneva in Switzerland? This sophisticated jazz festival is one of the most popular music festivals in the world, and has a long history dating back to the 1960s.

These days, jazz lovers from around the world descend on this picturesque spot to enjoy a mix of musical genres. Over 1500 artists have played at the festival over the years, including Herbie Hancock, who performed a record 27 times!

Where: Montreux, Switzerland
When: July

Denmark’s biggest music festival, Roskilde takes place each summer just south of the city of the same name. Popular with those across Scandinavia, the music festival is known for its relaxed vibe and friendly attendees.

Last year’s lineup included over 170 artists, from The Cure and Bob Dylan to Cardi B.

Where: Roskilde, Denmark
When: July

This is one of the most popular music festivals around the world. In fact, the Montreal International Jazz Festival holds the record for being the world’s largest jazz festival!

Around 2 million people attend each year, watching over 3,000 artists perform in over 650 concerts dotted across the city. Montreal is an incredible city to visit regardless, but seeing some top jazz is an extra special reason to travel!

Where: Montreal, Canada
When: June / July

I hope you’ve enjoyed reading about the most popular music festivals around the world. I look forward to squeezing in some of these amazing experiences on my adventures in the future. 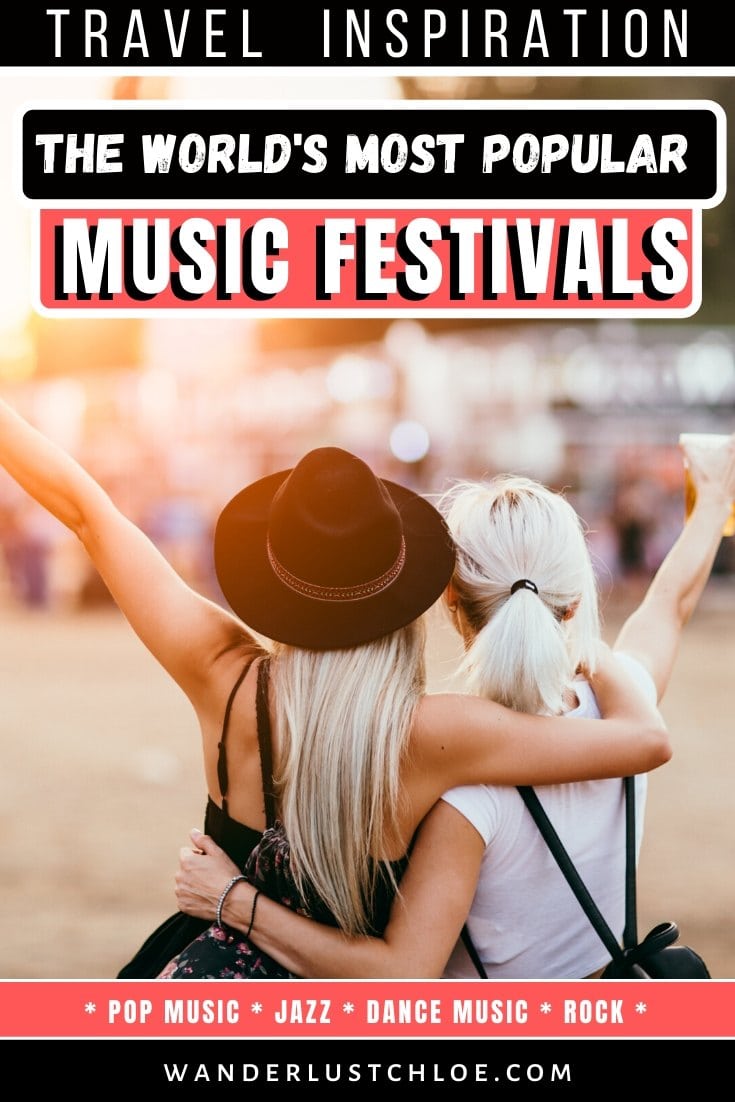