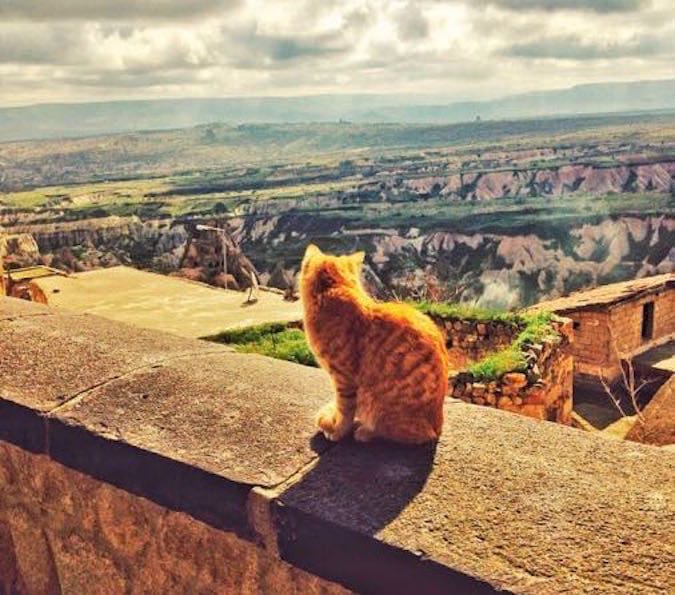 On arrival, out came hotel manager Abdullah, followed by a mini army of dogs and cats. The star of the pack – a one-eyed golden Labrador called Köpük (Bubbles in English). I instantly felt welcome. Kale Konak, which translates as ‘Castle Mansion’, is one of many boutique ‘cave hotels’ in Cappadocia. When booking, it’s hard to know where to stay.

I found many in the area didn’t have good websites, and while the photos were interesting, I was worried the rooms would be dark or damp. After a few minutes at Kale Konak, I knew I could forget any worries!

Part of the hotel incorporates the original cave rooms, with additional sections built from stone. Life started in Uchisar around 2000BC, so you can’t get much closer to history, than sleeping in it. I was given a tour of the hotel, which has 17 rooms, a restaurant, a few terraces, a garden area and a Turkish Bath (free to use for hotel guests). As I wandered through the cave tunnels, everywhere I looked were small historical artefacts, and Turkish antiques! A wagon rested by the entrance, a beautiful lamp cascaded light through one of the tunnels, logs were stacked ready for the next fire and traditional pots decorated the doorways. When I was shown to my room, I passed a cosy communal area. It had a large wooden dining table (made from an old door), with a cushioned seating area and fireplace. I could already envisage myself curled up there with a book, and a few of the fluffy cats for company! The bedroom (Kemerli Dam Twin Room) was beautifully traditional – curved stone ceiling, large urn, black iron coat stand, antique telephone, small fire and a large treasure chest (sadly empty!) All the modern amenities were stowed in one corner (kettle, TV) but the rest of the room felt like I’d been transported back to the middle ages. I visited during a particularly cold spell in April. Sadly it wasn’t warm enough to be seated on the terrace in the mornings, so breakfast was served in the restaurant area. I grew very fond of Turkish breakfasts, which are known for their variety of ingredients. The Kale Konak breakfast consisted of a plate of cheeses, pastry filled with feta, a sweet, nutty pastry and some mixed fruits. Additional to this, the table was suddenly filled with a meze-style spread! A basket of delicious breads, three types of dips, green and black olives, a cucumber and tomato salad, fried eggs, honey and a selection of fruit compotes. I didn’t know where to start! It was a relief to find the coffee was excellent too.

Uçhisar is a small village, with a few shops, cafes and restaurants. The staff at the hotel were able to recommend the best places to go for a Turkish pizza, or a big dinner! They also organised a transfer to my next hotel, as well as plying me with copious amounts of tea, coffee and red wine! Life felt relaxing and easy – my only worry was where to watch the incredible sunset from each evening!

What are you looking at kitty cat? Oh… Just another incredible view from @kalekonakcavehotel in Cappadocia. I don’t blame you!

While Kale Konak surpassed my high expectations, there was an extra feeling of magic while I stayed there – something that I haven’t felt in many hotels. This hotel has a warmth, that radiates from its owner Abdullah. He’s a man with a huge heart. The animals that live at the hotel were taken in by Abdullah after he found them injured or homeless. They weren’t intrusive or badly behaved, just seemed to love the life Abdullah provides. All this, and he has a few great danes of his own at his eco-build house a few miles away in a more remote area of Cappadocia.

I really enjoyed my chats with Abdullah over numerous cups of tea, and glasses of red wine, sitting in the garden overlooking the incredible Cappadocian landscape. His energy was magnetic, and that was what really made my stay at Kale Konak special. Kale Konak is a magical boutique cave hotel, which delivered everything I had hoped a cave hotel would… and more. Incredible architecture, history, hospitality and views over Cappadocia make it the perfect choice for a visit to the area. Needless to say, I think I’ll be returning very soon, even if just to have a cuddle with Köpük!