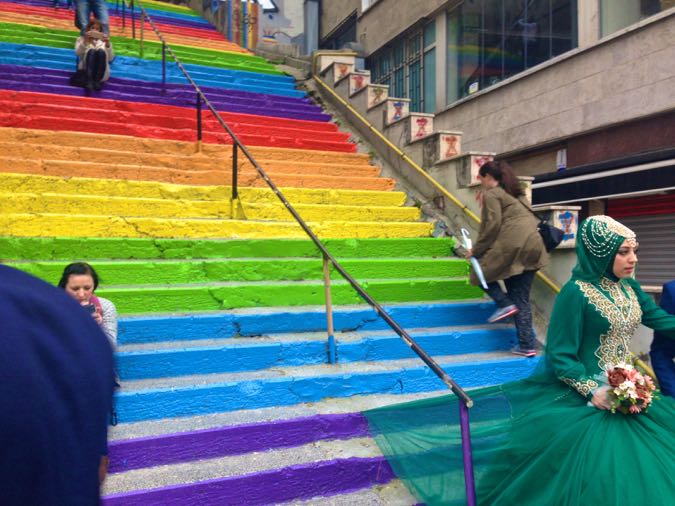 There’s a beautiful story behind Istanbul’s Rainbow Steps, guaranteed to put a smile on your face.

Some pre-trip research on Istanbul in Turkey, brought up some very colourful photos on Instagram. They were of the so-called ‘Rainbow Steps’ linking the arty districts of Findikli and Cihangir.

They reminded me of the Lapa Steps in Rio… another magical set of stairs that brought tourists to an otherwise overlooked area.

So, what’s the story? Are they highlighting LGBT issues? Something political? Or are they just a bit of fun?

In 2013, retired forestry engineer Huseyin Cetinel spent four days and around £500 transforming the huge staircase, from concrete grey, to beautiful rainbow colours. It was a kind of guerrilla street art project. No one expected it, but everyone fell in love with it.

It caused quite a buzz across the city! Many assumed it must be connected to the gay rights movement, seeming to fit with the rainbow flag. Some said it must be an outcry against the controlling government (particularly after the Gezi Park protests that had just taken place). Huseyin’s motivation was something entirely different… “I didn’t do it for a group or as a form of activism. I did it to make people smile.”

Sadly, overnight, the stairs were repainted a dull shade of grey. While the local government didn’t own up immediately, it caused such a stir, and they were forced to take ownership of the act. Many saw it as an example of a controlling government, and a lack of respect for the people. It was time for a revolution… a rainbow revolution!

Within a few days, not only were the stairs repainted, but volunteers also started painting other staircases and walkways in cities across Turkey. Photos spread via Twitter, and crowds flocked to take photos of the colourful sights.

When I visited the steps in April, a couple stopped by to take their wedding photos, a group of tourists ran up and down, while locals casually used them as they probably do everyday. Not only is there the main set of stairs, there are smaller offshoots (also painted) and another large painted (but rather weathered) set of steps one street away.

It’s definitely worth a visit… and Huseyin was right. His work certainly does “make people smile.” Not only is it a beautiful story, it translates to anywhere in the world. Perhaps it’s time to bring some colour to your neighbourhood?

The Rainbow Steps are located on Sali Pazari Yokusu (Café Nove is on the corner). 11 thoughts on “The Colourful Revolution of Istanbul’s Rainbow Steps”