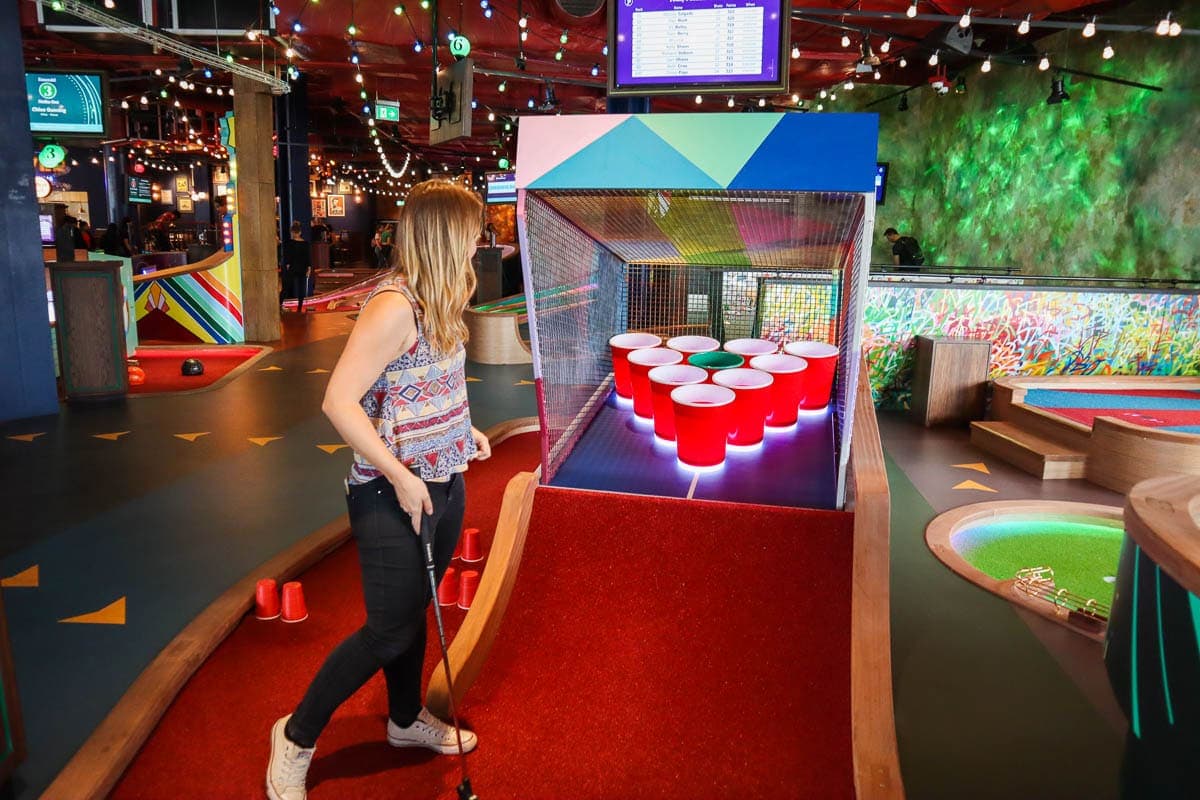 From immersive experiences, shopping and escape rooms, to crazy golf, spinning and delicious food, these are the best things to do in Shepherd’s Bush, London.

Oh Shepherd’s Bush… Chez Boo, my little buzzy neighbourhood! What a fun place you are to be. Ask most people ‘why visit Shepherd’s Bush’ and they’ll probably say ‘to visit Westfield’. While the area is home to Europe’s largest shopping centre, Westfield London, there’s plenty more going on too.

I’ve loved seeing fun experiences pop up over my time here. Some come and go, but many have lasted as they’ve been SO popular. It’s an area people travel to for entertainment, and I’m so happy to have so much on my doorstop.

So whether you’re visiting for the day to go shopping, and fancy adding a little activity on, or want to try something brand new, these are the top things to do in Shepherd’s Bush, London.

Top Things To Do In Shepherd’s Bush, London

This is no ordinary escape game! This is the official Sherlock live experience! Brand new to Shepherd’s Bush, this interactive experience involves playing detective as you solve a case using mental challenges and puzzles.

You don’t need to be a fan of Sherlock to enjoy it (I’ve never seen it!) but no doubt you’ll find it even more engaging if you are. Along with seriously impressive sets, there are a few video cameos from the stars of the show.

We escaped in 55 minutes, and ended the night with a celebratory cocktail in the Mind Palace Bar – built especially for the game. This is definitely one of the most fun things to do in Shepherd’s Bush in 2019.

Puttshack takes mini golf to the next level! Located in the newest section of Westfield, it utilises the latest technology to create a really fun game, suitable for all the family. I loved the design of the 9-hole courses, which featured a prize wheel, skate ramp, giant beer pong and even a drum kit.

The clever technology means you don’t have to worry about keeping scores as you go, and there are chances to score bonuses and prizes (including free games) on the course.

There’s also a bar and restaurant area, so you can spend a whole afternoon or evening there. As there are several courses, I can’t imagine you’d ever wait very long, but you can book in advance if you want to secure a certain time slot.

I never realised just how useful it would be to have a huge shopping centre on my doorstep until I moved to Shepherd’s Bush. With over 300 shops, 60 places to eat and drink, a cinema, bowling alley, several hairdressers, a gym, Japanese supermarket and more, it’s easy to spend a whole day at Westfield.

I like that there’s a wide variety of places to shop – from designer labels like Louis Vuitton in The Village, to budget shops like Primark in the new wing.

One of my favourite parts of living near a big shopping centre like this one is that there are SO many restaurants close by. I could eat a different cuisine every day… from Brazilian BBQ at Cabana and dim sum at Ping Pong, to Mexican at Tacos Corazon and sourdough pizza at Franco Manca.

Spinning is one of THE most popular ways to get fit these days, and First Light in Westfield have created something super special. With three high-tech cycle studios, kitted out with light displays, an enormous panoramic screen and a pumping sound system, it’s one of the most fun and memorable exercise experiences I’ve ever had! It’s also a serious workout, so expect to sweat!

All Star Lanes – Bowling and karaoke

Also within Westfield is this retro style bowling alley and karaoke venue. I’ve been to some of the other All Star Lanes in London and they’re great. Great retro vibes, upmarket menus of cocktails and a fun environment for a night out with friends.

There are 8 lanes in the main area, plus a chic private room with two lanes, a bar and karaoke. If you’re looking for a venue for a birthday party in Shepherd’s Bush, this is a great option.

Tucked away next to M&S in Westfield is a sign to KidZania, which describes itself as an indoor city run by kids. Once inside, your little ones can live their fantasies of being firemen, air stewards, radio DJs, pilots and more!

There are different games and scenarios for children to enjoy, each earning them ‘wages’. Tickets are valid for a 4-hour experience, and it’s recommended for kids from age 4 – 14.

The Bush Theatre is a top venue for seeing the latest in contemporary theatre. It’s a real hub of creativity in the area, and somewhere that supports new playwrights. Along with a huge roster of shows on in the theatre, there’s a lively cafe/bar downstairs, which I’d recommend visiting for a cuppa if you’re in the neighbourhood.

The Library Cafe area is one of my favourite places to spend a few hours working on my blog.

Find out my pick of the best restaurants, bars and cafes in Shepherd’s Bush.

There’s a brand new state of the art theatre in Shepherd’s Bush! Located in White City Place, there are two large spaces which can seat up to 2,000 people in total. It only opened in 2019, but had a busy summer season of shows for children, including The Very Hungry Caterpillar and Peter Pan.

One of the top live music venues in London is right here overlooking Shepherd’s Bush Green.  Catch the biggest bands and music acts as they tour the world. It’s a lovely old building too, built in 1903 as a music hall, then later used as the BBC TV theatre.

Popular artists who’ve taken to the stage include Prince, David Bowie, Oasis, Bob Dylan, Take That, Adele, Amy Winehouse, Elton John and The Rolling Stones. You can check out the latest listings here.

Yet another great venue in London W12, Bush Hall also has a great history to it. Built in 1904, it was one of London’s top dance halls. Over the years it’s had a number of uses including being a soup kitchen in WWII, a bingo hall, a rehearsal space for the likes of The Who, Adam Faith and Cliff Richard and a snooker club. I love the vintage interiors, with elegant chandeliers and red velvet curtains adorning the stage.

The acts the hall hosts are varied, including spoken word, acoustic, pop, comedy and country music. Check out the latest listings here.

We escaped! This is one of London’s top escape game venues. Located along the Uxbridge Road in Shepherd’s Bush, Escape London is home to four different escape games. There’s The Cabin, The Da Vinci Room, Area 51 and their newest addition – Overthrone (which we played).

If you’ve never played an escape game, they’re SO much fun and involve a mix of puzzles, riddles, observation and lateral thinking. This is definitely one of the most fun things to do in Shepherd’s Bush.

Breathing new life into Shepherd’s Bush Market, this is W12’s answer to Pop, Street Feast and all the other awesome street food spots in London! Made from 72 shipping containers, it’s located on the site of an old laundry, and offers world cuisines including West African street food, grilled cheese sandwiches, vegetarian dishes and more.

Fancy being in the audience for your favourite TV show? A lot of the UK’s biggest TV shows are filmed in Shepherd’s Bush at Television Centre. Take a look at the listings on SRO Audiences then apply for your favourites.

I was in the audience for The Graham Norton Show a while ago, which was great fun! A word of warning, even if you’re allocated tickets, you’ll need to queue. It takes a while to get through security and be seated, so be prepared!

Along with the studio space, the BBC’s old digs have been transformed into over 900+ plush apartments.  Also on site is White City House (a new branch of Soho House) and top restaurants including The Bluebird Cafe, Kricket and Michelin-starred Endo at the Rotunda.

Find out my pick of the best restaurants, bars and cafes in Shepherd’s Bush.