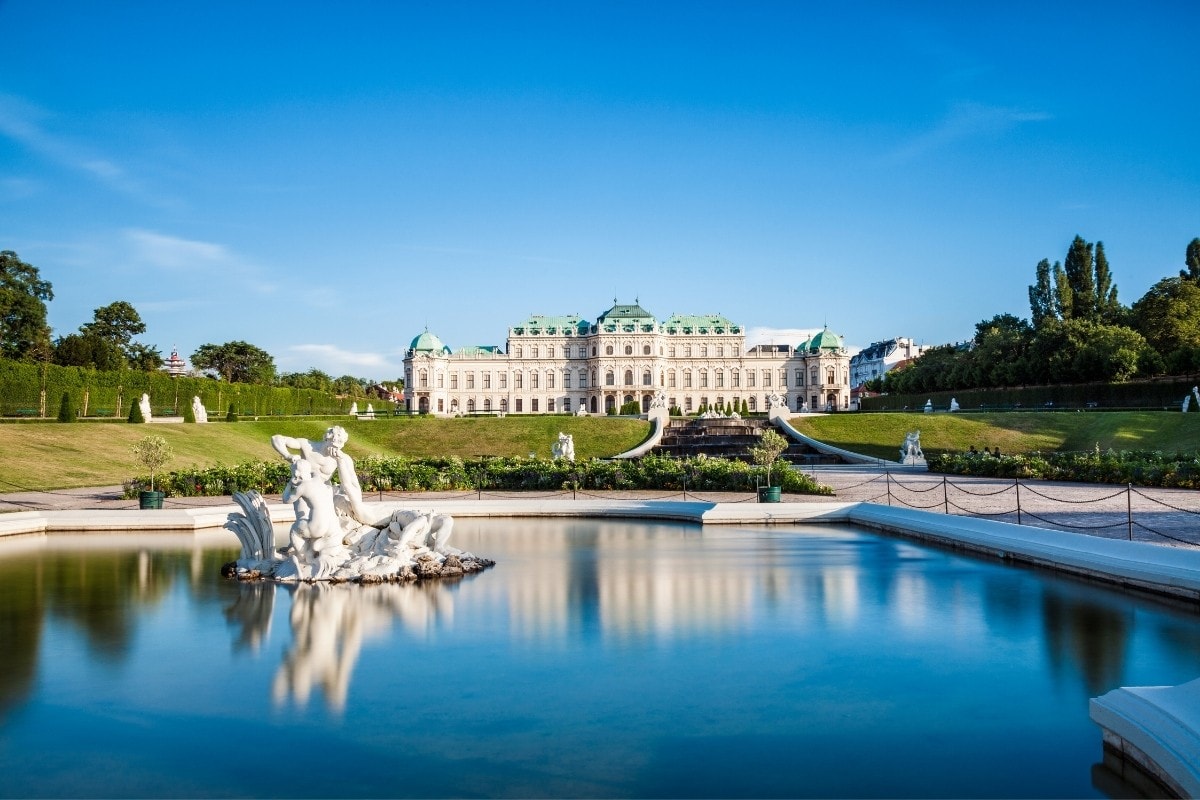 Planning to spend a weekend in Vienna? This 2-day Vienna itinerary is packed full of tips on where to visit on your city break.

Vienna is one of my favourite European cities for a weekend break. It’s bursting with classical architecture, has several stunning parks and a great food scene too. Once you get to know it you’ll realise it has a wonderful independent spirit too.

Art lovers, history buffs and culture vultures will adore visiting the city’s top museums. Meanwhile, those looking for cool things to do in Vienna will enjoy checking out areas such as Neubaugasse and Prater.

If you’re keen to pack a lot into your weekend in Vienna, you’ve come to the right place! Rather than lay out a timed 2-day Vienna itinerary, I’ve decided to pop together a list of suggestions on places to visit, depending on your interests.

If you want to get to grips with Austrian and Viennese culture, no doubt places like Schönbrunn Palace, the Hofburg and Vienna State Opera House will be top of your list. However, if you’re planning a low-key weekend in Vienna, and would like some offbeat suggestions too, you might enjoy the urban landscapes around the Danube Canal or seeing the city from a different angle from the giant ferris wheel.

I’ve really enjoyed my trips to Vienna. It’s a very walkable city, so my advice is to get out on foot and explore with your eyes and ears wide open.

Ready to start planning your trip to the Austrian capital? Here’s my guide to planning a Vienna city break.

How To Get To Vienna

Vienna is very easy to reach. If you’re travelling from outside of Austria, you can fly to Vienna International Airport. From there, the city centre is accessible by train in under 30 minutes, or you can hop in a taxi.

Austria benefits from being within the Schengen Countries Zone – a group of 26 European nations with no border controls between each other. This means it’s really easy to reach Vienna from any of its neighbouring countries, by car, train or bus. Most non-European citizens will need a Schengen visa to enter Austria, so definitely check before you travel.

Once you’re in the city, you might find it handy to pick up a Vienna City Card or a 2-day sightseeing card. You can use these for any journeys on the city’s public transport system (subway, tram, bus and train).

So, you’ve got 48 hours to spend in Vienna? Whether you want to see all the famous sights, or visit some quirky and unique spots, here are my suggestions for places to visit on the ultimate weekend in Vienna.

The Hofburg is the name given to the large palatial complex in the heart of Vienna. These days it’s home to the Austrian government and is where the President of Austria conducts business from.

There’s so much history in this part of the city, and it’s well worth going just to look at the incredible architecture. Don’t miss the oldest part of the building – the Alte Burg, a medieval fortress constructed in the 13th century, known today as the Swiss Wing.

You can buy tickets to enter the Vienna Hofburg, where you can visit the Sisi Museum, Imperial Apartments and Silver Collection.

Be A Big Kid At Prater

Vienna is a city with its very own theme park in the centre. Located within Prater (a large park area) is a big amusement park with lots of rides and games, along with places to eat and drink.

Unlike Disneyland Paris and many other theme parks, it’s free to enter. You simply pay for the rides you want to go on (most are around 5 EUR). I went on the Praterturm – the tallest swing in the world. It’s one of the best things to do in Vienna and perfect if you want to see the city from a whole different angle.

Book A Ticket To The Opera

Culture vultures will relish the opportunity to step inside the world-famous Wiener Staatsoper. Vienna State Opera House was built in 1869 and is absolutely stunning inside. It’s incredible to believe the horseshoe-shaped auditorium, had to be completely rebuilt after the Second World War.

Each season, Vienna State Opera House plays host to over 350 performances of world-class operas and ballets. Book a ticket, pop on your chicest outfit and enjoy a cultural experience like no other.

If urban landscapes are more your thing, I’d recommend taking a walk along the Danube Canal. There are paths on either side of the water, and the walls are covered in colourful street art and graffiti. It’s like one long open-air art gallery!

If you’re planning your weekend in Vienna for the summer months, you could stop by one of the city’s ‘beach bars’. There were several along the edge of the water, with deck chairs, cocktail menus and some with real sand!

Alternatively, spend an afternoon in the sunshine at Badeschiff Wien – Vienna’s floating pool boat! As well as a large swimming pool, the large boat has a bar, restaurant and lots of sunbathing areas on board.

If you’re interested in science and nature, take a trip to the NHM Vienna. One of the largest museums in Austria, it’s home to 39 exhibition rooms containing more than 100,000 objects.

Exhibitions change regularly, and when I last checked there was one on food waste, another on radioactivity and another on spiders. This is a great place for families spending the weekend in Vienna.

Ready for an incredible photo opportunity? Located to the west of Vienna city centre, the UNESCO World Cultural Heritage Site of Schönbrunn Palace is the most visited tourist attraction in Vienna and one of the most famous buildings in Austria. People often visit on a day trip, and it’s worth booking tickets in advance as it can get very busy.

The incredible Rococo palace was the main summer residence of the Habsburg rulers and dates back over 300 years. Inside the palatial imperial residence are 1,441 rooms, many of which you can visit on the guided tours. There’s lots of info on the Habsburg Monarchy as well as the architecture and significance of the building itself.

If you want to learn even more about this period of history from the 16th century to the end of the monarchy in 1918, you could also pay a visit to Vienna’s Museum of Military History.

Schönbrunn Palace’s vast gardens are well worth exploring too. They feature an orangery, palm house, fountains, a maze, a zoo, desert house and several water features. You can enter parts of the Palace Park free of charge too.

Looking for Vienna’s coolest neighbourhoods? Take a trip to Neubaugasse and peruse the independent shops, eyeing up chic vintage items and cute homewares.

Don’t miss homeware store Felicitas, Kitsch Bitch for funky clothes and vintage wares at Bootik 54. Oh, and if you get peckish there are some great hipster cafes and healthy food stores around Neubaugasse Street too.

There’s no shortage of grand buildings in the centre of Vienna. I found myself snapping so many photos as I wandered the city on my weekend in Vienna.

The two Belvedere palaces (Upper and Lower Belvedere), were built in the early eighteenth century as a summer residence for Prince Eugene of Savoy. They’re located in a beautiful park area featuring landscaped gardens.

If you’re interested in art, definitely pay a trip to Upper Belvedere. It’s the most visited art museum in Austria, and features works by Klimt, Monet, and Van Gogh. It’s a great addition to your 2 day Vienna itinerary.

Get To Grips With Vienna’s Famous Cafe Culture

Vienna is known for its fancy coffee houses, and you’ll see plenty of classical style cafes as you wander around the city centre.

If you want to sit and enjoy a coffee and a slice of cake where the city’s intellectuals, composers and high-fliers once sat, head to Café Frauenhuber (the oldest coffeehouse in Vienna), Café Mozart, Café Central or Café Sperl. They’re filled with old-world charm and a nod to Vienna’s traditions.

Or, if you’re craving something more modern, there are plenty of cool, hipster cafes to visit too. I’d recommend checking out Burgasse24 (a cool vintage store with its own café), Amerlingbeisel (a cute café tucked away in a courtyard with a leafy canopy), Cafe Latte (another hidden gem, with big orange lanterns hanging overhead) and Das Möbel Cafe (a café dedicated to showing the works of independent designers).

Watch A Magical Display At The Spanish Riding School

If you’d like to learn about Vienna’s history and traditions, book a ticket to the Spanish Riding School. Established in the 16th century, this Austrian institution is dedicated to the preservation of classical horsemanship and the training of Lipizzaner horses (a prized breed of horse).

Seeing these creatures move is like watching elegant ballerinas! You can watch training sessions and performances in the baroque Winter Riding School in the Hofburg Palace, right in the centre of Vienna.

Dine In a Palm House

One of Vienna’s prettiest dining spots, Palmenhaus is located in one of the old greenhouses overlooking Burggarten – one of the parks right in the centre of the old town.

The building is magnificent, filled with tall palm trees and foliage, and while prices are a little higher than other restaurants, the setting is unique. I was impressed with the reasonable lunch menu, with dishes under 12 EUR.

I hope this 2-day Vienna itinerary gives you lots of inspiration for your trip. If you’re looking for other suggestions of things to do on a weekend in Vienna, check out my guide to unique and quirky things to do in Vienna.

This blog was produced in in collaboration with AXA.