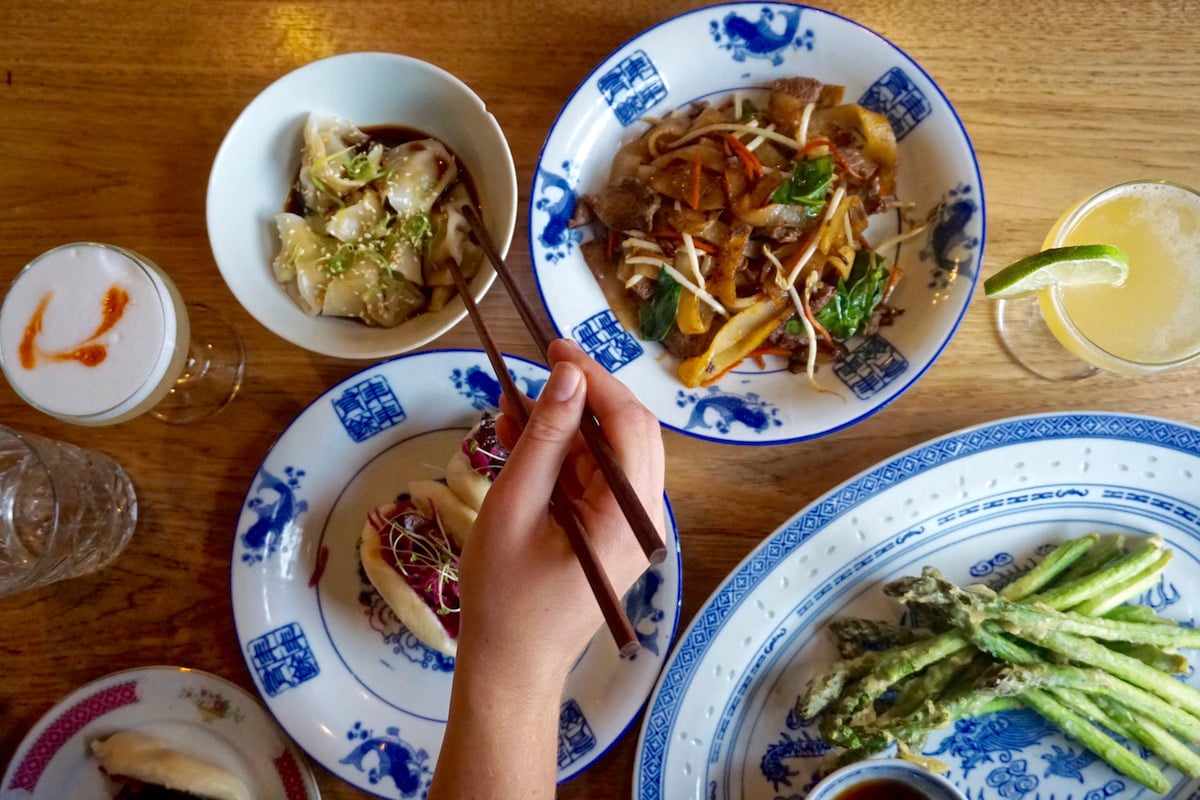 Find out the best restaurants, bars and cafes to eat at in the foodie city of Edmonton in Alberta, Canada.

I’ve just returned from my first trip to Canada! I spent just under a week in Edmonton, Alberta. It’s the province that you might know is home to Banff and Jasper National Parks, but I was there with a whole other motive. I had six days and I fully intended to eat my way around the city. Tough challenge huh?

From Chinese bao and Mexican tacos, to top Ukrainian fare and epic brunches, Edmonton is a real foodie city with a restaurant to fit every craving.

So in no particular order, here are the places I had the pleasure of dining at, and a few top dishes to order when you visit!

Oh and if you’re new to the city, be sure to read my ultimate guide to visiting Edmonton before you visit!

This local spot is part café and part general store selling a fun collection of gifts. Brunch is their main event, and it’s as photogenic as it gets with perfectly poached eggs sitting on thick cut bacon and covered in apple cider hollandaise. There was an intense #eggporn moment too!

I really liked the vibe – it had that community spirit you don’t find in many places (perhaps because it was in a residential area rather than a commercial one) and I saw lots of posters for events, including backyard BBQs with live music, food and drinks.

This retro diner in Edmonton’s trendy Warehouse district was a great find. I loved the quirky décor with vintage lights, chequerboard tiles and work by local artists on the walls.

Visiting for brunch, I tucked into the Blue Plate Breakfast – their signature ‘full works’ which included roasted new potatoes, eggs, toast, and freshly made sausages. Very tasty and most importantly, the coffee was good and strong! The lunch and dinner menus looked inviting too, with plenty of international dishes including spring rolls, gnocchi and even an English shepherd’s pie – certainly not something I see everyday when I’m travelling!

If you’re into your craft beer, they do a deal of $5 craft beers from 3-7 everyday.

This is one seriously cool restaurant, and it’s massive! I loved the different lights hanging around the main restaurant area, and while I visited at lunchtime, I could imagine it being especially pretty at night.

The lunch menu was an intriguing mix of international flavours. The restaurant describes their food as a mishmash of familiar and faraway flavours made with traditional and trendsetting ingredients. From pork belly steamed buns to truffle-topped pizzas and sandwiches, it was certainly hard to choose what to have!

I went for the lifestyle bowl, which I’d describe as ‘quite possibly the healthiest thing I’ve ever eaten’… but don’t let that put you off, it was damn tasty too! It featured spiralised vegetables, quinoa, avocado, rice noodles and was topped with an oozing fried egg and a tangy lemongrass dressing. The Indian inspired buttered eggplant with paneer and chickpeas was another winner.

One of the coolest restaurants in Edmonton, Baijiu was one of my favourite dining spots in the city. The modern Asian restaurant serves up a baos, tempura, spring rolls, fried noodles, grilled fish, sizzling steaks and more. It’s located in the Mercer building, moments from Rogers Place – the city’s new arena and home to the Edmonton Oilers.

We ordered several dishes to share including the pork baos, beef noodles, tempura asparagus and chicken gyozas. All of it was totally delicious, and when the chef suggested we try the devilled tea eggs too, we couldn’t resist! The flavours were all wonderful, with a particular nod to the moreish sauce the gyozas were in (tangy, rich and flavourful) and the yummy chunky noodles.

All that love for a restaurant, and I’ve not got to the cocktails yet! Baiju is also a cocktail bar. To be honest, if it wasn’t for the jetlag kicking in, I’d have worked my way down the drinks menu too.

Best for: Asian food that tastes as good as it looks!

With a no reservations policy and long shared tables, MEAT could have been plucked from Shoreditch or Brooklyn, and this restaurant in the cool area just off Whyte Avenue is about as hipster as the city gets. It’s all about BBQ’ed meat, and these guys really know what they’re doing!

The ribs were so tasty, the smoked chicken was full of flavour and we even tried some brisket and pancetta. The sides were great too, with Brussels sprouts, an indulgent mac and cheese, tasty baked beans and garlic fries.

Oh and if you visit, don’t forget to sample some of their tasty homemade sauces which include BBQ, cherry and bourbon. I also have it on authority that this is the best spot for pecan pie around… ok I admit it, the authority is me!

Best for: satisfying your inner carnivore

While this isn’t an obvious ‘restaurant’ to visit as such, if you’re interested in a cultural experience, then definitely head out of Edmonton to the Ukrainian Cultural Heritage Village. It’s like walking through history and charts the movement of Ukrainians as they settled in the region, established homes, businesses and found their place in society.

I found it fascinating to hear that so many Ukrainians moved to Canada between 1890-1930, and obviously, they brought their eastern European cuisine with them.

Along with making some pyrohies (Ukrainian dumplings) in an old-style kitchen, we sampled a selection of traditional dishes with a modern take at their café. The menu included potato cakes, borscht (beetroot soup), kielbasa (sausage) and a cardamom spiced fried dough dessert.

Best for: Interesting food where you can taste the culture.

The menu was a feast of delicious Mexican flavours (one of my fave cuisines!) and while sipping on tasty cocktails we ordered two lots of tacos. The steak, pickled veg and BBQ Aioli were super tasty, but my favourites were the grilled fish and crispy shrimp tacos which were topped with habanero aioli and a tasty coconut tropical salsa.

As the evening draws on, this is a lively spot with a dancefloor and DJs.

Best for:  Nights that start with tacos and end with tequila.

Culina Café at The Muttart

The Muttart Conservatory was one of my favourite spots in Edmonton. The four glass pyramids act as greenhouses, containing incredible plants from different climates across the planet.

We combined our visit with a trip to Culina Café. The brunch menu looked great with eggs benedict and French toast catching my eye. However, I was craving something lighter so opted for the large house salad which contained tasty crunchy vegetables, chick peas, grains, cranberries and delicious salty feta.

Best for:  A light bite in unique surroundings.

My favourite coffee shop I stumbled across on my trip, Block 1912 serves great coffee in a really cool environment. It’s a huge space with funky chains of lights hanging down (actually, we were passing in a taxi and I spotted the lights out of the window and immediately wanted to check it out!) and a cosy alcove filled with books.

It’s great for so many situations too – when you’re looking for a digital nomad space to rock up with your Macbook, a dessert spot with the girls or a coffee date.

After a bit of research into ramen and pho joints in the city, we took a chance on Pho Boy – and it paid off! It’s yet another super cool member of Whyte Avenue’s popular food scene. With huge murals on the walls, a retro arcade machine and cool threads of lights hanging from the ceiling, it’s got a fun vibe, perfect for a meal with a group of friends.

Pho Boy’s Vietnamese street food is packed full of flavour and considering we visited around 6pm on a Sunday, it was full! Their pho was totally delicious with a really intense beef broth. It was served with a tray of extra ingredients we could add according to taste (chilli, beansprouts, fresh herbs, lime). We also ordered a portion of legend rolls – the restaurant’s speciality crispy spring rolls that were totally moreish!

Last but not least, one of the best ways to get to know Edmonton’s food scene is by booking onto a food tour. This was one of the highlights of my time in the city. Starting off at Kitchen By Brad, we enjoyed a huge brunch of (mainly) Ukrainian delicacies. We then took a trip through the huge Saturday market on 104th Street.

We sampled gyozas, meat pies and salted caramel, spoke to jam producers and fishermen, and ended the morning with a spot of wine tasting. The guide was really knowledgeable and it was a chance to really understand why food is the heartbeat of the city.

Best for: Eating your way around the city (and learning where to go back to!)

Find out more about Edmonton’s food scene here. Thanks to Edmonton Tourism for inviting me to #ExploreEdmonton. As always, opinions are my own.

8 thoughts on “These Are The Top Foodie Spots You Have To Eat At In Edmonton, Canada”