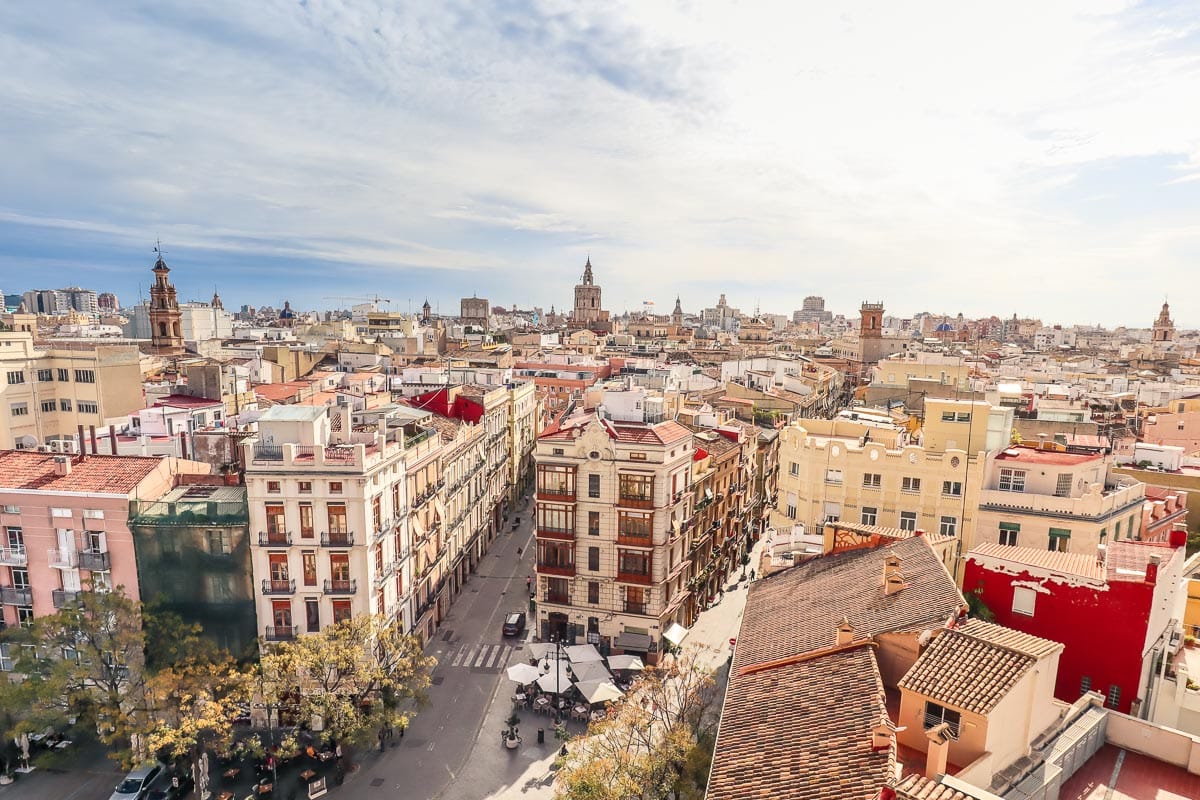 Wondering where to go for the best view in Valencia? Find out whether to climb El Miguelete (Valencia Cathedral’s bell tower) or the medieval gate at Torres de Serranos in this detailed comparison of the two experiences.

Whenever I visit a new destination, I always try to find the best viewpoint. Somewhere where I can get a good overview of the city, snap some photos and gain a new perspective of the place. I’d looked up where offered the best view of Valencia, and narrowed it down to two options: Valencia Cathedral and Torres De Serranos.

Both cost 2€ to visit and give great views of the old town, city centre, Turia gardens, main plazas and more. They’re also both located within the historic part of the city (main tourist area) and are easy to walk between. Neither require booking in advance or going on a fixed tour, so you can just turn up when you fancy, or time it to capture an epic sunset in Valencia. They’re amongst the best things to do in Valencia too (check out that post for plenty more great ideas for your time in the city!)

So, in the name of research, I decided to visit both of them! That way I could advise you guys where to go. So, without further ado, it’s time to compare the experiences of climbing Valencia Cathedral tower and Torres de Serranos.

Valencia’s impressive cathedral is the most prominent landmark in the old city. Most of the construction took place between the 13th and 15th centuries, there was more work after, so along with Gothic architecture, you’ll find examples of Romanesque, Renaissance, Baroque and Neoclassical.

The 167 ft bell tower is known as El Miguelete – basically little Michael! It’s named after its biggest bell, which is known as Miguel (Michael!)

I chose a sunny afternoon to visit, paid 2€ for a ticket, and started the ascent. At the bottom and top there’s a green / red traffic light system which signals when it’s safe to climb the steps. I think it related to how many people were coming up / going down, so as not to make the stairs too congested.

There’s a spiral staircase to reach the top, and it’s not one for the faint hearted. There are 207 steps in total. It’s a real thigh and calf workout!

As you get nearer the top, the stairs become narrower, so if you suffer from claustrophobia, I wouldn’t recommend this experience.

On the way up you pass two levels, which are visible but not open to the public, including one which contains the tower’s smaller bells. Once you emerge at the top, you’ll see the main bell in all its glory, and you can even walk right underneath it.

The panoramic view of Valencia is impressive, but it’s worth noting there’s a high wall, with a wire netting above. This makes photography a little tricky, and it does look a bit ugly!

The views are spectacular though, and there are a few steps you can take a seat on and rest your tired legs before the climb down. I spent around 15 minutes at the top, spotting various landmarks including the Art and Science Museum, Turia Gardens, Plaza Redonda and the city’s two ancient gates – Torres de Quart and Torres de Serranos.

I wouldn’t recommend climbing the tower if you’re claustrophobic, struggle with fitness levels or if you have to carry your little ones! Even I found it pretty tiring, but I was happy to take it at my own pace.

Vital stats: Valencia Cathedral Tower – El MigueleteConstructed: 14th – 15th Century
Height: 51m / 167ft
Number of steps: 207
Difficulty level: Hard
Price: 2€ for adults (FYI the tower isn’t included in your ticket for Valencia Cathedral)
Opening times: Every day from 10am-1pm, then again from 4.30pm – 7pm. This may change a little depending on the season so check before you go.

Looking for other things to do during your trip? Find out my 29+ AMAZING things to do in Valencia, or read about my tapas tour of Valencia.

One of the best-preserved monuments in Valencia, the Torres de Serranos is one of 12 gates built towards the end of the 14th century as part of the city’s defence structure. The gates surrounded the city, fortified by an old city wall. These days, only two remain – this one to the north of the city, and Torres de Quart to the west.

The shape is like a small castle, complete with turrets, lookouts and flags waving on top. The two towers are both pentagon-shaped, with an area joining in the middle. It’s very photogenic, especially if you cross the Pont de las Serrans (bridge opposite) and look back towards the city.

This is one of many key attractions which you can get free entry to with a Valencia Tourist Card – something I’d definitely recommend for your trip, as it includes free entry to lots of the city’s key sights, free transport and discounts at many restaurants. You can read why I think it’s worth it in my pros and cons post here: Is it worth buying the Valencia Tourist Card?

I started to climb up the steps. Unlike the cathedral tower, there are lots of levels to stop off at, so the climb never felt tiring. I enjoyed seeing views of the city from different levels, even peeking through small arrow holes and gates, taking in the various perspectives. I’d say it’s one of the best places to take pictures in Valencia.

From the top were clear, unobstructed views to landmarks including Valencia Cathedral and the lush Turia Gardens. This was one of my favourite parts of this view actually. The tower overlooks the northern part of the gardens, giving you a lovely panorama of the beautiful palm trees and River Turia’s old bridges.

There are lots of levels to check out, plus a skinny turreted level on the outside edge, which makes for some very cool photos!

So which Valencia viewpoint is better: Valencia Cathedral or Torres de Serranos?

Out of the two, my favourite Valencia viewpoint was the Torres de Serranos and here’s why…

For a less historic option, I read that you can see one of the best views in Valencia from Ateneo Mercantil Mirador – a viewpoint in the new part of the city near City Hall. This is a good option if you have mobility issues as two lifts take you up the 50m to the main viewpoint over Valencia.

I hope you’ve enjoyed finding out where I think offers the best views in Valencia. Let me know which one you prefer.

I’d recommend picking up a Valencia Tourist Card for the duration of your trip. They’re very reasonable, include entry to many of the city’s attractions (including Torres de Serranos), discounts and freebies at local restaurants and offer complimentary transport (including to the airport). You can read about why I think it’s worth it in my post: Is it worth buying a Valencia Tourist Card.

Looking for other things to do during your trip? Find out my 29+ AMAZING things to do in Valencia, all of my top picks of where to stay in Valencia, whether it’s worth buying the Valencia Tourist Card and read about my tapas tour of Valencia.