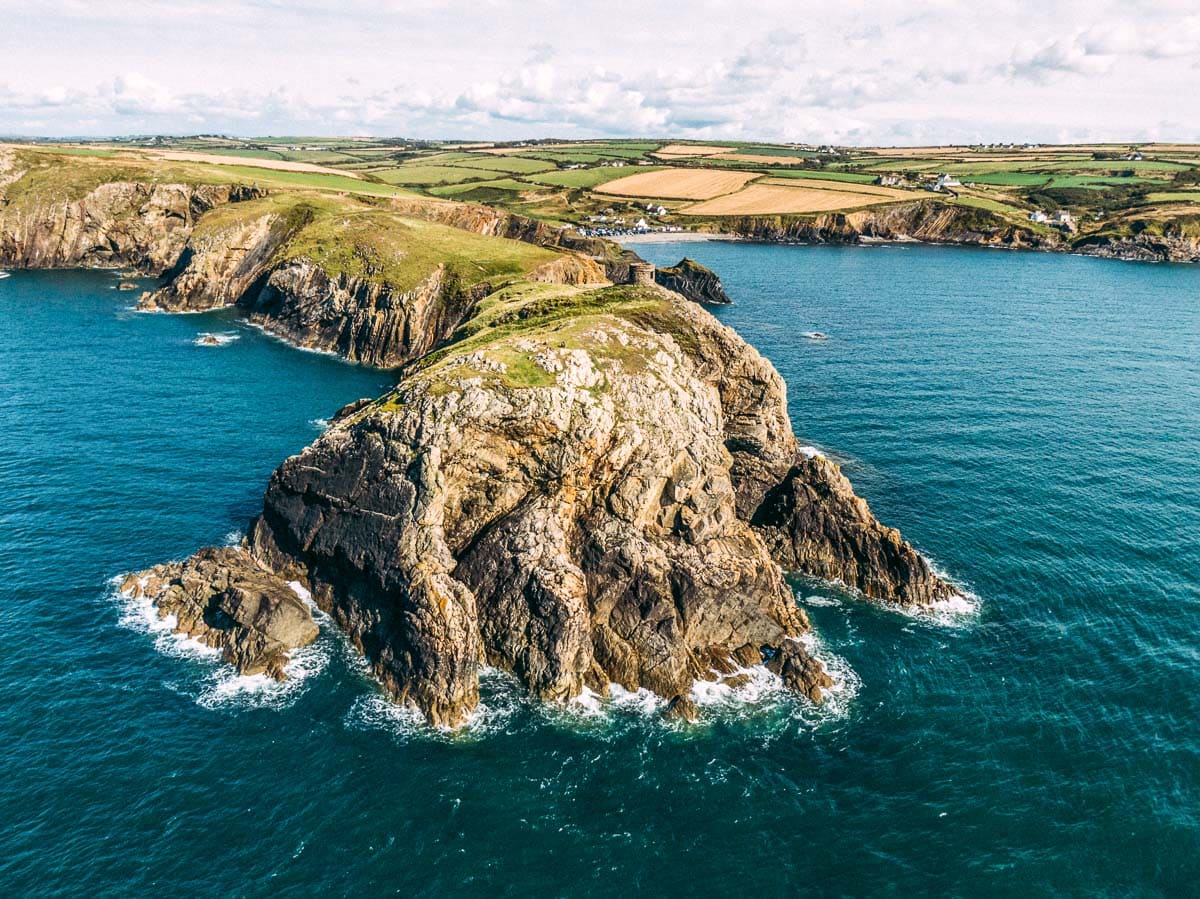 Ready for a dose of travel inspiration? It’s time to discover the Celtic Routes of West Wales and Ireland’s Ancient East. These beautiful spots are guaranteed to reawaken your sense of adventure!

The relationship between the two Celtic nations of Wales and Ireland has been established through centuries of shared history, in which countless ancient and mystical myths and legends have formed.

The magical relationship began when Irish migrants who settled in Wales in the 5th century left their mark through the Ogham stones that still line the Welsh coastline today. In return, Wales supposedly gave St Patrick to Ireland. See, I told you this was an interesting one!

The Welsh and Irish counties of the Celtic Routes act as almost mirror images of each other from across the Irish Sea, with long, unspoilt beaches and lush rolling countryside framed by dramatic mountain ranges beyond.

With so many of us desperate to pack a weekend bag and travel, but wanting to find safe and secluded spots to visit, I’ve been looking for places to recommend that fit the bill. The Celtic Routes of Wales and Ireland offer space, solitude and scenery in abundance, making them the perfect destination for a relaxing getaway.

Here are 12 locations from across the Celtic Routes where you’ll discover the sights, sounds and stories that have shaped these beautiful parts of the world.

If you like getting off the beaten path, Marloes Sands is a must-visit beach in the Welsh coastal county of Pembrokeshire. After a half-mile walk down to the bay, you’ll be met with 1.5km of secluded sands and crystal-clear waters. If you love surfing, this is a really popular spot too. Look out to sea and you’ll notice Stokholm and Gateholm islands in the distance.

2. Lose yourself in the land of a literary legend

One of the most notable legends of Laugharne, a coastal town in Carmarthenshire, is the famous playwright and poet Dylan Thomas. No visit to Laugharne would be complete without a pilgrimage to The Boathouse, where Dylan lived with his wife and family in the last years of his life.

On your way, you’ll pass his writing shed overlooking the Taf Estuary, where Thomas wrote his famous radio drama, ‘Under Milk Wood’. The Boathouse has been left just as though Thomas had popped out for a breath of fresh air, so the true spirit of the place truly remains. I’d recommend staying at Dylan Coastal Resort if you visit this area.

Aberystwyth, affectionately known by the Welsh as ‘Aber’ (it means ‘the mouth of the River Ystwyth’) could easily be known as Wales’ Celtic culture capital. It’s a university town and home to the National Library of Wales, which sits in an impressive building overlooking the town’s bay, ancient hillfort and castle ruins.

It’s a great foodie town too, with plenty of great restaurants and bars on the seafront. After a busy day exploring the magnificent coast, you’ll be spoiled for choice on where to relax and unwind with dinner and a few drinks!

4. Forage for an organic lunch on the beach

The Celts had a spiritual bond with the natural world and believed that the sea is a source of healing and cleansing, of food and wealth. So, what better way to immerse yourself in this world than by foraging?

During a coastal foraging experience along the Carmarthenshire coastline, namely at the pretty village of Llansteffan, you’ll learn how to find prawns, mussels, cockles, wild samphire, sea anemones and scarlet elf cup mushrooms. The reward for your efforts is your very own zero-waste, organic lunch on the beach. Let’s face it, food always tastes better when you’ve had to work for it!

The undisturbed and clean waters of Cardigan Bay in Ceredigion make it a perfect playground for bottlenose dolphins, with a resident population of around 250. Your best chance for spotting one is in the summer months by chartering a boat out into Cardigan Bay.

Bottlenose dolphins are extremely social, so they’ll often leap alongside boats and ride the bow wave, making for an unforgettable experience. If you’re lucky, you may even see some from the harbour.

The mystery surrounding Pentre Ifan’s purpose is what attracts visitors to it year on year. While it’s generally considered to be a communal burial chamber, no traces of bones have ever been found here.

An alternative theory suggests it’s a more elaborate version of a standing stone and the builders were simply showing off their skill. Whatever the real answer, there’s no doubt Pentre Ifan is an impressive feat of ancient engineering. The giant 5m-long, 15-ton capstone, precariously balanced on three uprights, has managed to remain in place for over 5,000 years.

Put on your walking boots and lose yourself in this stunning walk as you witness Ireland’s glorious coastline stretch out as far as the eye can see in front of you. The 7 km cliff walk path from Bray to Greystones in Wicklow is regarded as one of the best walking trails in Europe.

For panoramic views of Bray, North East Wicklow and Dublin Bay, plus the neighbouring mountains of the Great and Little Sugar Loaf, take the path from Bray to the top of Bray Head. You’ll be amazed by what you see from there. Have your camera ready!

8. Step back in time at the Irish National Heritage Park

No trip to Ireland would be complete without immersing yourself in the sights, sounds and stories that shaped the heritage of the nation. Set in 40 acres of atmospheric woodland just outside Wexford town, you can experience over 9,000 years of Celtic history at the Irish National Heritage Park.

Journey through prehistoric Ireland, early Christian Ireland and the age of invasions by the Vikings and later, the Normans. Forage like a prehistoric farmer, throw an axe like a Viking and even spend a night in a medieval ringfort. How much fun does that sound?!

9. Hop on a bike and cycle around Waterford Greenway

This former railway line from Waterford City to Dungarvan on Ireland’s coast has recently been transformed into a 46 km off-road cycling and walking trail, ideal if you love staying active on your holidays.

This route will take you across no fewer than 11 bridges, 3 viaducts and through a 400 metre-long tunnel. Oh and there are plenty more things to see and do along the way, from the 9th century Woodstown Viking settlement, to the world-renowned ornamental gardens at Mount Congreve.

10. Grab your binoculars and go whale watching at Hook Head

November marks the beginning of whale watching season off the Hook Peninsula in Wexford. Back in the winter of 2010, there were reports of a number of fin whales and a humpback spotted off the coast at Hook Head.

Remarkably, the whales have made a welcome return every year since, the humpback becoming particularly associated with this area of Ireland. Head to the top of Hook Lighthouse and stand on its red balcony, an ideal viewing point with binoculars. Or to raise your chances of seeing one of these beautiful creatures further, you could even charter a boat for your own whale watching trip.

11. Get back to nature at Blessington Lakes

As well as being the main source of drinking water for Dublin, Blessington Lakes is ideal for those who love getting out on the water and back to nature. Once described as the ‘jewel of Wicklow’, you can fish, boat or kayak on this spectacular 5,000-acre reservoir.

Or if you prefer your activities on land, why not walk, run or cycle the 6.5 km Blessington Greenway along the lakeshore and into the woodland? The scenery is stunning.

12. Take a pilgrimage to Admore for pure peacefulness

Beautiful Ardmore, an ancient fishing village in Waterford, has history in abundance. Visit and you’ll be transported back as far as the 5th century when its monastery, Ireland’s oldest Christian settlement in fact, was founded by St Declan.

You’ll also find an 8th-century oratory and a 12th-century 29m-high round tower, which served as a belfry and place of refuge. Make sure you find time for the 4km cliff walk that starts and ends in the village, where you’ll pass St Declan’s Well, where pilgrims have paid tribute for hundreds of years on the 24th July, the Saint’s feast day.

How do I get to the Celtic Routes?

Road – Your Celtic Routes adventure is accessible by car, driving along the coast of Carmarthenshire, Pembrokeshire and Ceredigion before crossing to Ireland.

Sea – After exploring Wales’ Celtic Routes offering, you can catch a ferry from Fishguard in Wales to Rosslare in Ireland.

Air – Fly direct from Cardiff, Bristol or London airports to Dublin. Then you can hire a car and drive south to Wicklow, Wexford and Waterford.

As of 4th August 2020, travellers arriving to Ireland from the UK will be required to quarantine for 14 days on arrival. This is being continually reviewed but you can check the latest information here.

Enjoyed this post about the Celtic Routes? Pin it for later…