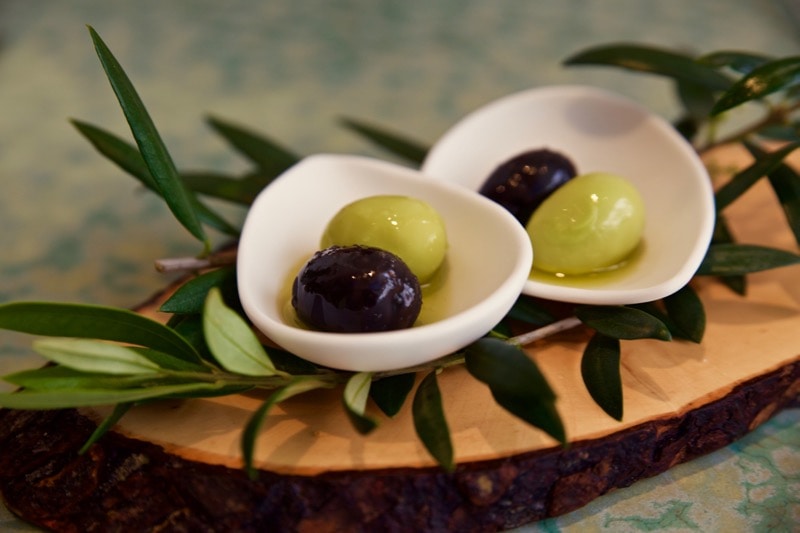 *Since my visit, Disfrutar Barcelona has been awarded two Michelin stars. I re-visited the restaurant more recently which you can read about here.*

Two “olives” are placed in front of me. One black, one green. They are glossy with olive oil and a sprinkling of salt. However, nothing is as it seems at Barcelona’s hottest new restaurant Disfrutar.

Launched in late 2014 by Oriol Castro, Eduard Xatruch and Mateu Casañas, three head chefs at Ferran Adria’s former-best-restaurant-in-the-world elBulli, this restaurant looks set to place Barcelona as one of the culinary capitals of the world. What does Disfrutar mean? To enjoy – something we were ready for with several courses ahead!

There are two tasting menus – the Festival Menu being a 25-course extravaganza. To describe and dissect every course would take a long time (and make you very hungry) but I wanted to share highlights of what was a truly theatrical, delicious and very memorable evening.

The meal began with a melon caipirinha, which was made in front of us by the waitress who poured liquid from a teapot into a cup of crackling ice. It frothed up into a cocktail creating a fragrant melon scent. On the saucer lay an intensely flavoured cube of fresh melon, covered in mint, lime and salt. A refreshing, light, and rather boozy start to the meal! Next up, more theatre as a bowl heaped with black rice grains was placed on the table. It was shaken and two pink balls of beetroot meringue magically appeared. They were light, crisp, chewy, sweet and savoury and yet unmistakably beety.

Then came the olives. This was a signature dish at elBulli, and uses the spherification process. When eaten whole, the outer layer made from cocoa butter bursts, filling your mouth with an intense liquid. One was filled with olive flavouring and the other with a citrusy-blood orange. I started to question every course that followed – would anything be as it seemed?

The crispy egg yolk with mushroom gelatin was another highlight. The tempura battered yolk oozed truffle flavour as it sat in an egg shell concealing a delicious set/jellified? mushroom consommé. The combination of flavours and textures was heavenly.

There came a point around 13 courses in when I started to feel rather full. While many courses were bite size, Disfrutar uses a lot of luxurious flavours. Intriguing though it was, I wasn’t able to finish the seafood and avocado meringue. These arrived looking exactly like miniature baguettes, were both sweet and savoury, and filled with lobster, coriander and avocado. It was incredibly rich, and the portion was just a little too much after what had preceded it.

The house ‘macaroni carbonara’ was genius – completely transparent gelatine based macaroni was placed in a pan with cubes of parmesan and bacon. At the table, the waitress piped on a truffle and carbonara sauce, along with grated parmesan. The powerful truffle gave a wonderful flavour to the sauce and my appetite magically rekindled.

One of the lighter courses arrived just at the right moment. Described on the menu as a vegetable sashimi, it included thin slices of cucumber, endive, tomato, fennel, apple and more. Each ingredient had been marinated in a different surprising flavour – the cucumber tasting of peppermint and the fennel of eucalyptus. This worked as the perfect palate cleanser to cut through the richness of the previous courses.

Other notable courses include the juicy monkfish on a butter lettuce leaf with satay-style sauce and the wafer thin Wagyu beef and foie gras which you wrapped up like a cannelloni.

After 20 courses, it was time for a breather… and then on to the sweet section of the meal.

‘The Tangerine’ – a signature dish at Disfrutar was a complex and refreshing dish. Two tangerines, surrounded by leaves, arrived at the table in a Disfrutar box. It immediately smelled like Christmas! Inside the skin of the tangerine were layers of rose jelly, a granita, a cream made from green mandarin and Cointreau and a delicious parfait with cinnamon dusting. It was beautifully sour with an elegant sweetness. Despite the cream, it was not a heavy course.

Next – the Cheesecake cornet. A cherry cone containing sour cherry sorbet, hidden Kirsch jelly, rich cream, and crystallised mint. You could smell the cherries! The tartness of the cherry flavours complemented the richness of the cream and I liked the novelty of eating from the chewy cherry cone!

One of the final courses was described as chocolate peppers, oil and salt. By now, when I saw the perfect red and green chillies complete with real stalks, I knew they weren’t going to be peppers. As with the olives, this was another clever piece of trickery – the inside of the jelly skin being chocolate cream. The chocolate was intense and strong, and the salt and oil worked well. Two more desserts followed and after the final course I muttered “I’m not a dessert person, but I’ve eaten five desserts!”

There was plenty of magic in the process of receiving and tasting each course. However, this was just the first stage. It was heightened further by watching others receive their food, and gauging their delight and surprise. We, as participants, became viewers of the next table, and continued to relive the magic of each dish via them.

The welcome as we arrived was warm and informal. Staff were stylishly dressed in jeans, white zip-top shirts and half aprons. The service was friendly and informative without being pretentious or stiff. We were encouraged to taste each course in a particular way (“eat this in one bite”) and I was very impressed by the ability to explain the complexities of the menu in Spanish, Catalan and English!

There was a real buzz in the restaurant, enhanced by the half-open kitchen. The cutout cream and brown panels created a contemporary dining environment without being overbearing. I particularly liked the kitsch ‘blue sky and clouds’ skylights! There was also a terrace where you could take drinks or coffee.

This isn’t the kind of fancy restaurant where you leave still hungry due to tiny portions. While 98 Euros may seem pricey for a meal, Disfrutar restaurant is somewhere you go for a special occasion. I felt for the level of cooking, spectacle and quantity and quality of the ingredients it was actually remarkably good value. We also enjoyed a surprisingly reasonably priced wine recommended by the sommelier – just 19 Euros a bottle.

After 25 courses and 3 hours of entertainment, it was time to roll home, but not before congratulating the chefs on the exceptional food. I look forward to returning to Disfrutar Barcelona for another dose of magic and theatre soon, no doubt when it will have a few Michelin stars to its name and I’ll probably have to wait a year for a booking.  (Update 2018 – it does! Disfrutar Barcelona now has 2 Michelin stars – congratulations to the wonderful team of chefs there! It’s well deserved).

Since my first visit, I returned to Disfrutar Barcelona more recently, which you can read about here.

Disfrutar Barcelona cost – The Festival Menu was 98 EUR when I visited.

4 thoughts on “REVIEW: Disfrutar, Barcelona – What’s It Really Like To Eat At Barcelona’s Top Restauarant”