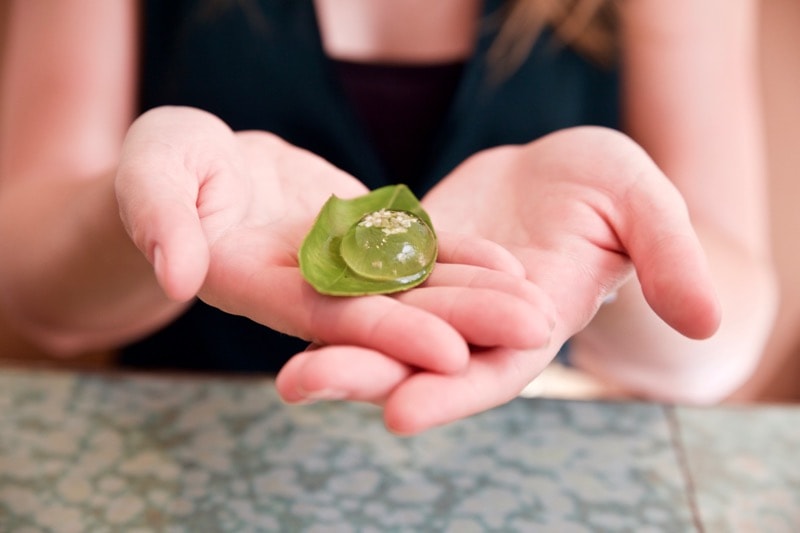 With two Michelin stars and rated one of the top 10 best restaurants in the world, a meal at Disfrutar Barcelona is like nothing you’ve experienced before. After one of the best meals of my life, I couldn’t wait to return!

It’s pretty rare I return to a city and want to eat at exactly the same restaurant I went to to before. With so many places to explore, why wouldn’t you try somewhere new? But when I had a trip to Barcelona confirmed, there was only one place on my mind. Disfrutar Barcelona.

Opened at the end of 2014 by Oriol Castro, Eduard Xatruch and Mateu Casañas, three head chefs at Ferran Adria’s former-best-restaurant-in-the-world elBulli, it was a restaurant pretty much guaranteed to produce great food. I described my first visit as an evening of magic and theatre. But with expectations sky high – how would it fare on my return?

My biggest curiosity was whether the menu would be the same. Would it have developed? Would there be bigger sensory explosion? Was that even possible?! My first experience was all about crazy bursts of flavour, contrasting textures and creative presentation. Surely that was something they’d be continuing?

Seats taken, we prepared for a 28-course extravaganza kicking off with a frozen passion fruit ladyfinger with rum and mint. As the wafer thin biscuit cracked, the ice cream dissolved with a boozy kick. It reminded me of my favourite drink, a passion fruit mojito. From that point onwards courses came in quick succession, from delicate hare consommé to oozing walnut candy and deconstructed whiskey tart, there was never a dull moment.

The daily menu at Disfrutar Barcelona features several small courses giving eruptions of flavour, along with themed sections centred on specific ingredients. We opted to do the wine-pairing, which focused on Spanish wines and sherries.

With 28 courses on offer, I’d be here all day if I described each one in detail (and spoil lots of surprises if you plan to visit the restaurant), so I’m going to highlight a few of my absolute favourites.

It’s hard to feel excited about food when the key ingredient is one you know you don’t usually like. For me, that’s a category nuts fall into (mad, I know). So when I saw there was a grouping of three dishes based around walnuts, I was apprehensive. Tender walnuts with ratafia, salty ‘candy’ with walnuts, mango, tonka beans and whiskey, and a rich walnut cream.

The walnut courses were served in walnut shells, lying on a bed of salt – such dainty presentation! With a soft texture, the nuts were both sweet and salty, and absolutely delicious when dunked in the ratafia – an aniseed-flavoured gelatine. The ratafia was delicious and aromatic, reminding me of 5 spice.

The walnut cream was served in a shell-like vessel, which I shot back as if it were an oyster. It was rich and oh so velvety. While the focus was on the humble walnut, it was taken to new heights with these cooking techniques, and my fears of a course based on nuts soon disappeared!

While I was pleased to see plenty of new additions to the menu, elBulli’s signature ‘olives’ (made using spherification) were still there. Looking like glossy green and black olives, the dish is a reminder that not all is as it seems at Disfrutar.

When eaten whole, the outer layer (made from cocoa butter) bursts, filling your mouth with a flavoured liquid. One was filled with an intense olive oil and the other with a citrusy-blood orange. Part of the magic was watching other diners’s faces as the filling burst for the first time. Eyes widened, giggles were heard, and surprise filled the room! This was all part of Disfrutar’s magic.

I’ve fallen in love with ceviche from my travels around South America. It’s a staple of the Chilean diet, and while in Santiago I even had the chance to make my own. Disfrutar’s was named ‘deconstruction of ceviche’… so I knew this was not going to be a plate of diced fish covered in lime juice.

A bowl arrived containing several coloured liquids and a quenelle of orange ice cream in the centre. It smelled refreshing, with notes of fish, citrus and onion. I’d never thought of having ceviche ice cream before! The monkfish ceviche was subtle, balanced by the different flavours and textures of the liquids in the bowl. Oils, velvety creams and more flavoured with onion, salt, lime, vinegar and herbs created the distinctive summery ceviche taste. Little did I know, this would be one of our favourite dishes of the entire meal.

The new menu featured elements from international cuisines. Along with South American ceviche there was Moroccan pigeon and several Asian-inspired dishes.

Arriving in a traditional basket shrouded in dry ice were delicious mushroom dumplings. Smoke subsiding, it was time to tuck into the light dumplings which contained a vinegary filling of porcini and wild mushrooms.

As for cauliflower sushi – total genius! Draped with smoked salmon, the cauliflower retained some of its crunch after being fed through a ricer. From afar you wouldn’t know the rice had been substituted. The cauliflower and seaweed combined to create an earthy, salty taste, totally different from any sushi I’d tried before. A real game changer!

One thing I couldn’t help but notice was the number of diners taking photos. While we were snapping away continuously to take the best photos for this blog, others were doing it just for pleasure. Particularly unexpected when groups of businessmen were all sitting with their iPhones directly above their plates, trying to get the best light!

In terms of the seafood courses, my favourite was the langoustine el ajillo. It was a dish I smelled long before I tasted it! With strong black garlic, chilli, a parsley foam and a few tiny fried fish on top, it was a remarkably simple dish after plenty of courses which really pushed the boundaries. For me, along with being really tasty, it showed that the team at Disfrutar can also let ingredients speak for themselves, no tricks required.

While it wasn’t my favourite dish of the meal, it was one of my partner’s, so I feel I should definitely mention the ravioli with oyster and soya beans. After several sherries and sweet wines, the sommelier brought a very different bottle to the table. A splash of aged soy sauce was poured into our glasses as we received a dish containing 2 transparent pieces of pasta – one topped with soya beans and the other with an oyster.

There was a rich cream on the plate and we were told absolutely no salt had been added. We would balance the dish ourselves, with sips of soy in between mouthfuls. The combination really worked! We used posh tweezers to wrap up the ‘ravioli’ and then swigged soy sauce. Hey, it was a bit of a novelty, but the salty flavour of the soy cut through the richness beautifully. In fact, I’d probably prefer a sip of soy to some wines! Quoting my partner “bang bang bang – oh that oyster!” He couldn’t stop talking about it!

As mentioned, there was a real international feel to the menu, which continued with the laksa. As I slurped fine noodles from the scoop, I enjoyed the rich creamy sauce, packed full of chilli and sumptuous Malaysian aromas. In terms of flavour, it was one of my favourites.

After several courses based on foie gras I was excited to try the Moroccan style pigeon. From my regular visits to Morocco, I instantly recognised the flavour of ras al hanout (the Moroccan spice mix combo), but it was also great to see other key components in Moroccan cuisine on the plate. The orange blossom gelatine packed a floral punch, while the cous cous with barley took me straight back to Marrakech. The pigeon was tender and cooked to perfection sitting in a rich sauce. It was a great way to round off the main courses.

As a beautiful flower encased in a large dewdrop arrived at the table, I didn’t know what to expect. Accompanying a dish containing almond cream gnocchi and elderflower, this was the ‘elderflower amber’. Another example of spherification, the contents popped in my mouth, exploding with an intense elderflower flavour. Totally magical – it looked like something you’d find in the forest in A Midsummer Night’s Dream.

I was over the moon to see that my favourite dessert from my first visit to Disfrutar Barcelona was still on the menu – the cherry cheesecake. The light cherry cornet was filled with numerous layers including cherry sorbet, vanilla cream and a crumble base with a wonderful boozy surprise waiting at the bottom! It was tangy and the tartness of the cherry balanced out the richness of the cream. It was one dish I noticed had reduced in size since my first visit, which worked better for me as I was feeling rather full!

The triumphant meal finished with “a cotton of cocoa and mint”. A huge branch was delivered to the table and we were told to pull apart the cocoa dusted pieces. What a showstopper! Forget candy floss, this was real cotton candy! The flavour? As if an After Eight mint had been mixed with a cloud – fluffy, light, sweet, chocolaty, with a big burst of mint! Another great meal completely nailed – it was an impressive closing act.

So visit 2 verdict? Disfrutar Barcelona is still creating fantastically inventive food, packed with intense flavours, while constantly surprising as they go. I was really pleased the menu had developed, with some dishes being refined, and others substituted completely.

While I’d be lying if I said I loved absolutely every single course, I think that’s natural! I was still able to appreciate the creativity and flair of the cooking, regardless of whether the ingredients suited my palette.

Service was efficient and friendly, with plenty of instruction on how to eat the dishes, and information about the lesser-known ingredients.

After nipping to the open kitchen to say a big thank you and congratulations to the chefs, we ended our lengthy lunch relaxing with a coffee outside on the stylish white terrace area. Last time I finished my review by saying:

I look forward to returning to Disfrutar Barcelona for another dose of magic and theatre soon, no doubt when it will have a few Michelin stars to its name and I’ll probably have to wait a year for a booking.

Well, although the wait wasn’t too long, it turns out I was right about the Michelin stars!

Thanks again to Disfrutar Barcelona for inviting me back to enjoy their incredible food. If you’re visiting Barcelona, be sure to book a table! 5 thoughts on “REVIEW: Disfrutar Restaurant, Barcelona – A Meal At One Of The World’s Best Restaurants”