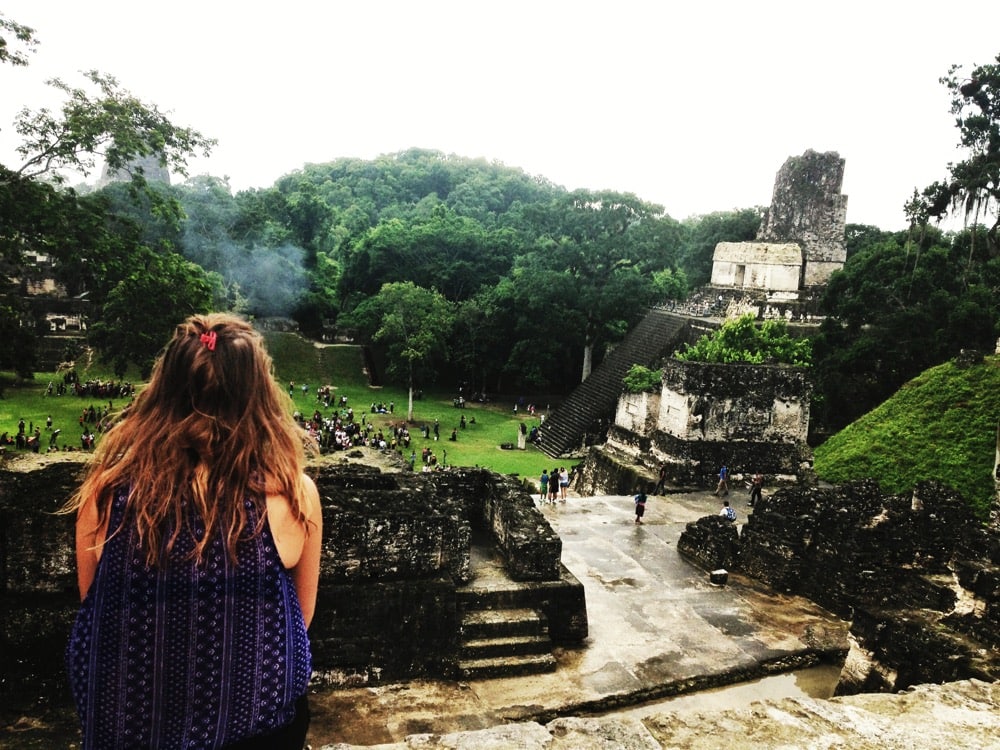 Exploring Belize’s ATM Caves and Guatemala’s Tikal are two things you absolutely have to do if you visit Central America.

From the Belizian island of Caye Caulker, we returned to the mainland and travelled a few hours to the small town of San Ignacio. The town is home to a main square, large daily market, a few hotels, an iguana sanctuary and some ruins… But the main reason tourists visit the area is for the incredible Actun Tunichil Muknal Caves or the ATM Caves.

Taking A Tour Of The ATM Caves, Belize

This is one of the best things to do in Belize! The cave tour is not for the faint hearted, although apparently it has been done by kids as young as 4 and as old as 90! It’s a combination of a jungle trek, river crossing, cave swim, rock climb and historical tour. You’re kitted out with helmets with lights and reminded you will definitely get wet!

After 45 mins we had waded across three rivers, and trekked through an amazing jungle. We reached the entrance of the caves, clambered over some slippery rocks and swam the first part of the journey into the depths of the cave. Once in it was a case of manoeuvring over rocks, sliding down slopes, squeezing through tiny gaps while always wading through the cold water. It was an exhilarating journey and the caves were so beautiful inside. Walls glistened with crystals, and looking up it was hard not be impressed by the cathedral-like ceiling. After around one hour of trekking we reached the point where we would start our ascent up into one of the main chambers. Up there were some surprises! Almost complete pots, vases, cups, and more sat in the dust, looking as though the Mayans had only been there a few days before. These have been traced back to between 700-900 AD. Again we ventured into another crystal-cathedral ceiling room, mesmerised by the mass of stalagmites and stalagtites adorning the walls.In the deepest point in the chamber lay the fully preserved crystallised skeleton of a teenage boy. Nearby was part of a baby’s skeleton – proof of human sacrifice rituals carried out by the Mayans, possibly to the rain god Chac. The return journey out of the cave was much speedier as we no longer had to fight the current. There was a real sense of achievement as we exited, with a few cuts and bruises to show for our adventure.

That evening we celebrated with cocktails, and sampled the local nightlife at nightclub Blue Angel. It was an eye opening experience as we watched the locals dancing the ‘punta’ – a very sexual dance involving a Iota of grinding!

The next day we crossed the border into Guatemala. After warnings of tricky Central American border crossings, we were lucky the only problem we had was yet another torrential rain storm! We drove to Flores, a small picturesque. island in Lake Peten Itza. Views were stunning. The island attracts many tourists due to its close proximity to the ancient Mayan ruins of Tikal, which we visited the next day.

We were lucky enough to visit on the day of a traditional Mayan festival. It was magical to see the incredible temples, with locals in traditional dress dancing, playing music and making fires. The ruins themselves are the largest in the Mayan world. Again, we weren’t blessed with the best weather, with torrential rain for most of the 4 hours we were exploring! It was amazing to climb up to one of the highest points, sit and look out, and imagine all the years of history that had preceded that moment. Back in Flores we shopped for locally-made jewellery and handicrafts, and touristy ‘Guats Up’ and ‘Guatever’ t-shirts. Dinner was from street food down by the water – tortillas, fried tortillas, baked tortillas and more tortillas. We drank 23-year-old Ron Zacapa (rum) and the local Gallo beer at the Sky Bar overlooking the water.