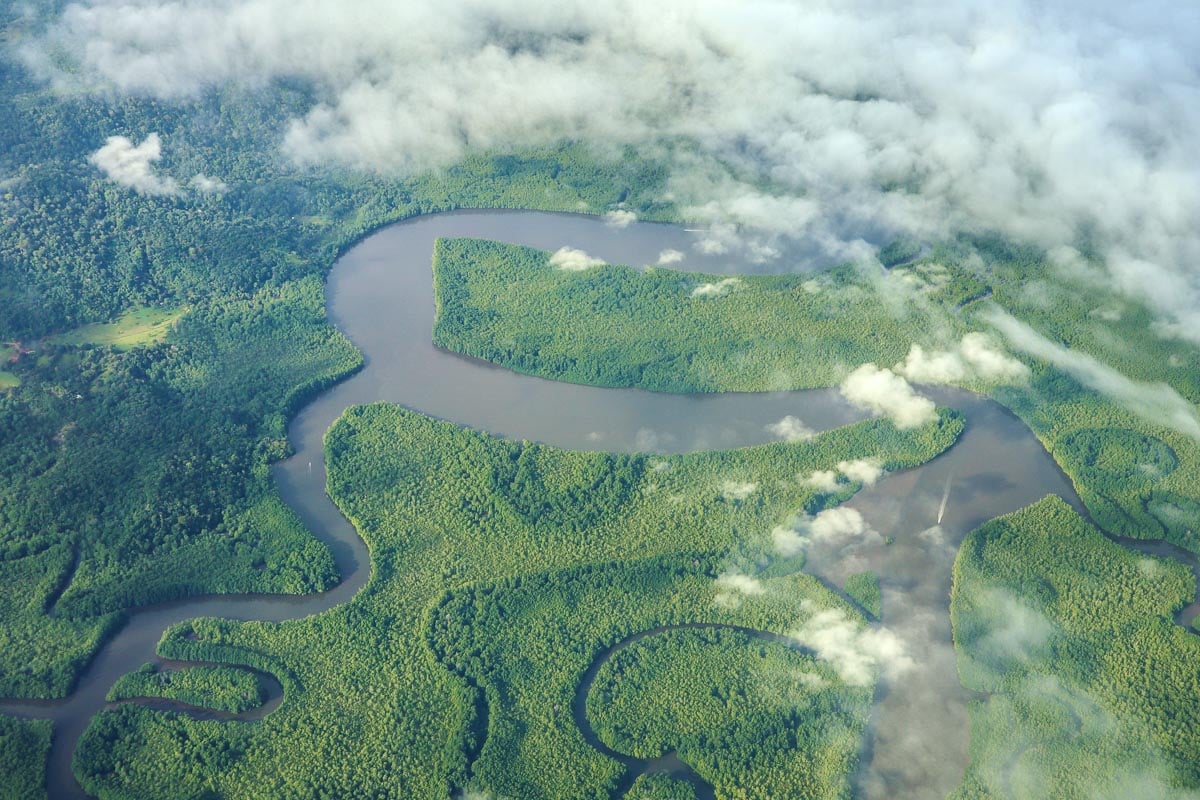 From wildlife and geography to food and drink, these interesting facts about Costa Rica are guaranteed to surprise you!

Welcome to the land of ‘pura vida’. Costa Rica is a country known for peace, wildlife and incredible adventures. It also happens to be one of my favourite countries in the world to travel to. I absolutely adore the mix of landscapes. One minute you’re road tripping past active volcanoes, the next you’re relaxing on a Caribbean beach, or trekking through a rainforest seeing monkeys, toucans and sloths. I also think Costa Ricans, or Ticos as they’re referred to, are some of the happiest, friendliest and most helpful I’ve met on my travels.

I’ve visited Costa Rica twice already and I’m already planning a repeat trip. It really is a magical country. I’ve learned a lot about the nation on my last few trips, but there were certainly a few gaps in my knowledge. For that reason I decided to find out more and pop together a definitive list of interesting facts about Costa Rica. These cover everything from tallest volcanoes to quirky facts about sloths.

If you’re planning a visit soon, definitely have a read of these Costa Rica facts before you travel. They’ll get you excited for what you’ll be seeing on your holiday. No doubt you’ll learn a few new pieces of trivia while you’re there too!

Did you know the name Costa Rica translates literally from Spanish as ‘rich coast’. Christopher Columbus is credited with discovering the country all the way back in 1502. So why did he think it was worthy of its rich title? Because he believed it was filled with precious metals.

When you’re travelling in Costa Rica you’re guaranteed to hear the words Ticos and Ticas. This is what Costa Ricans refer to themselves as, and is often used as a nickname by other nationalities for those from the country too.

Shopping in Costa Rica? Don’t forgot to carry some colón (₡) – Costa Rica’s national currency. It has been used in the country since 1897. 1 Colón is divided into 100 Céntimos. You’ll find USD $ are widely accepted too.

Before your trip you might want to brush up on your Spanish. After all, it’s the official language of Costa Rica. However, with tourism playing such a huge part in the country’s economy, many people speak English too.

There’s one phrase you’ll hear wherever you go in Costa Rica. ‘Pura Vida’. It translates as the pure life, but is so much more than a saying. It’s a greeting for hello, how are you and goodbye, plus a way of life that is calm, content and peaceful.

One of the most interesting facts about Costa Rica is that it doesn’t have an army. The Costa Rican army was abolished back in 1949 following a 44-day civil war in which more than 2,000 people died. Today it is known as a neutral, peaceful country.

Have you heard of Blue Zones before? They’re areas where people live longer and healthier lives than other places in the world. To put this in perspective, there are only 5 in the world, and 1 is Nicoya in Costa Rica. Researchers discovered that most inhabitants live to at least the age of 90, and many pass 100 years of age. In fact, Nicoya is home to the highest number of centenarians in the world.

Costa Rica is striving to become one of a handful of carbon neutral countries, and already generates almost 98% of its energy through renewable sources. It’s now pledged to achieve zero net emissions by 2050, meaning it would produce no more emissions than it can offset.

The flag of the country contains blue, white and red stripes. The dark blue is for the sky, idealism and opportunities. The white stripes represent peace, wisdom and happiness. Meanwhile, the red on the Costa Rican flag stands for the blood of the people defending the nation as well as the warmth of the people.

The flag also has a shield on it, which contains 3 volcanoes, 2 ships on water (representing the Pacific and Caribbean coasts), and 7 stars (representing each of Costa Rica’s provinces).

Costa Rica covers an area of 51,100km². To get the scale, that’s a similar size to West Virginia in the US, Slovakia in Europe and the Dominican Republic in the Caribbean.

Wondering how the country is split up? Costa Rica is divided into 7 provinces, within which are 82 cantons, which are then divided into 488 districts (each with its own 5-digit post code). The 7 provinces are: San Jose, Alajuela, Heredia, Cartago, Guanacaste, Puntarenas and Limon. San Jose is the most highly populated province, followed by Alajuela in the north. The law states that new cantons may only be created if they have at least one percent of the republic’s total population.

For a relatively small country, Costa Rica has a long and spectacular coastline. There are 800 miles of lush coast in total, spanning the Pacific and Caribbean. Love beaches? Well you’re in luck as there are over 300 to choose from!

Costa Rica has plenty of amazing landscapes to explore and natural wonders to see, including waterfalls, volcanoes, lakes and mountains. Mount Chirripó is the highest mountain in Costa Rica, with an elevation of 3,821 m (12,536 ft).

You’re guaranteed to see a few volcanoes on any trip to Costa Rica, and some of them are seriously impressive! There are over 100 volcanic formations, 60 dormant or extinct volcanoes and 6 active volcanoes Irazú, Turrialba, Tenorio, Rincón de la Vieja, Poás and Arenal (although Arenal is thought to be in a resting phase now). Irazú, located in the Central Highlands is the tallest at a height of 3,432 m (1,260 ft).

Meanwhile, Poas Volcano, thought to be over 11 million years old, has a green acid crater lake and the second widest crater in the world (almost 1 mile).

If you visit Arenal volcano, you’ll also get the chance to see the largest lake in the country. Lake Arenal is 85 square km (33 square miles) and in some parts is as deep as 60m (200 ft).

Costa Rica is famed for wildlife and biodiversity, so it’s no wonder there have been big moves to protect the lands. In total there are now 30 national parks, 58 wildlife refuges and 32 protected zones in the country, with approximately 25% of the country’s total land now protected against development.

One of the most famous facts about Costa Rica is that the country covers just 0.03% of the earth’s surface, yet contains a whopping 5% of the world’s biodiversity. Some of the best places to see the country’s most interesting creatures are in Corcovado National Park and Manuel Antonio National Park. Book a tour with a local guide and you’ll learn all about the amazing wildlife.

Costa Rica is home to more than 500,000 species of animals and plants, although bear in mind that around 300,000 are insects! While the country’s climate and ecosystems are a big reason for this, it’s also likely to be because of the country’s position in between North and South America.

The country is home to 206 species of amphibians, which include 146 different species of frogs and toads. The most famous is the red-eyed tree frog, which you tend to find in the rainforests.

One of the creatures you might be lucky enough to see in Costa Rica is a turtle. 5 of the world’s 7 species of sea turtles nest on the country’s beaches, with Tortuguero National Park on the Caribbean Coast and Ostional and Nancit Beaches on the Pacific Coast being the key spots to see them.

You might be surprised by just how many arrive in a day. At the beach in Ostional National Wildlife Refuge, as many as 100,000 Olive Ridley turtles have reached the shore in one day, laying around 10 million eggs.  Events like this are known as arribada which translates as ‘mass arrival’.

Costa Rica has two national animals, but surprisingly they’re not sloths, monkeys, jaguars, whales or frogs! The national land animal is actually the white-tailed deer, which was chosen because of its characteristics that symbolise Costa Ricans. These deer are known for strength, peace, energy, fertility, and prosperity. They’re also pretty cute!

More recently, the manatee was declared as the national marine mammal in Costa Rica. These peaceful and shy sea cows are on the endangered species list, and it’s thought there may be fewer than 100 in Costa Rica.

Costa Rica is home to 922 species of bird, with the clay-coloured thrush (known as yigüirro) the national bird of the country.

Sloths are one of the most popular animals to see in Costa Rica. These lazy creatures sleep for between 15 and 18 hours a day and have the lowest metabolic rate of any mammal. In fact, it can take them up to 30 days to digest a leaf!

There are approximately 343 hummingbird species in the world and 52 of them call Costa Rica home! Did you know they have the fastest heart rate of any bird, beating up to 1,200 times per minute!

If you’ve visited Costa Rica, no doubt you’ve eaten a few plates of gallo pinto. You’ll see this tasty dish of spiced rice and beans at breakfast, lunch and dinner. It’s the national dish for a reason! There’s a dispute over whether it originated in CR or Nicaragua, but it’s said the origins are Afro-Caribbean.

The name translates as ‘spotted rooster’ as there is a legend that a farmer invited locals to a feast for his spotted rooster. When a lot more people turned up than expected, he served up a huge batch of rice and beans, and thus the legendary dish was created.

Costa Rica is a rich country when it comes to natural ingredients, with bananas, sugar cane, coffee, chocolate and pineapples all produced on the land. There are banana plantations dotted across the landscapes of Costa Rica, so it won’t come as a big surprise to hear that the country is the fourth largest exporter of bananas in the world. Almost 7% of the world’s bananas come from the country!

Coffee is big business in Costa Rica too and the country is known for its high quality arabica coffee. In the 1800s, the government incentivised local farmers by offering free land in order for them to grow coffee plants. You might not always drink the best coffee while in Costa Rica though as a whopping 90% is exported.

I hope you’ve enjoyed learning all about Costa Rica with me today! It’s such a varied and interesting country, it’s no wonder there’s so much to get to grips with. If you’re planning your trip, don’t miss my guides: 10 Day Itinerary For Costa Rica and What To Pack For Costa Rica.

Enjoyed these interesting facts about Costa Rica? Pin this post for later…