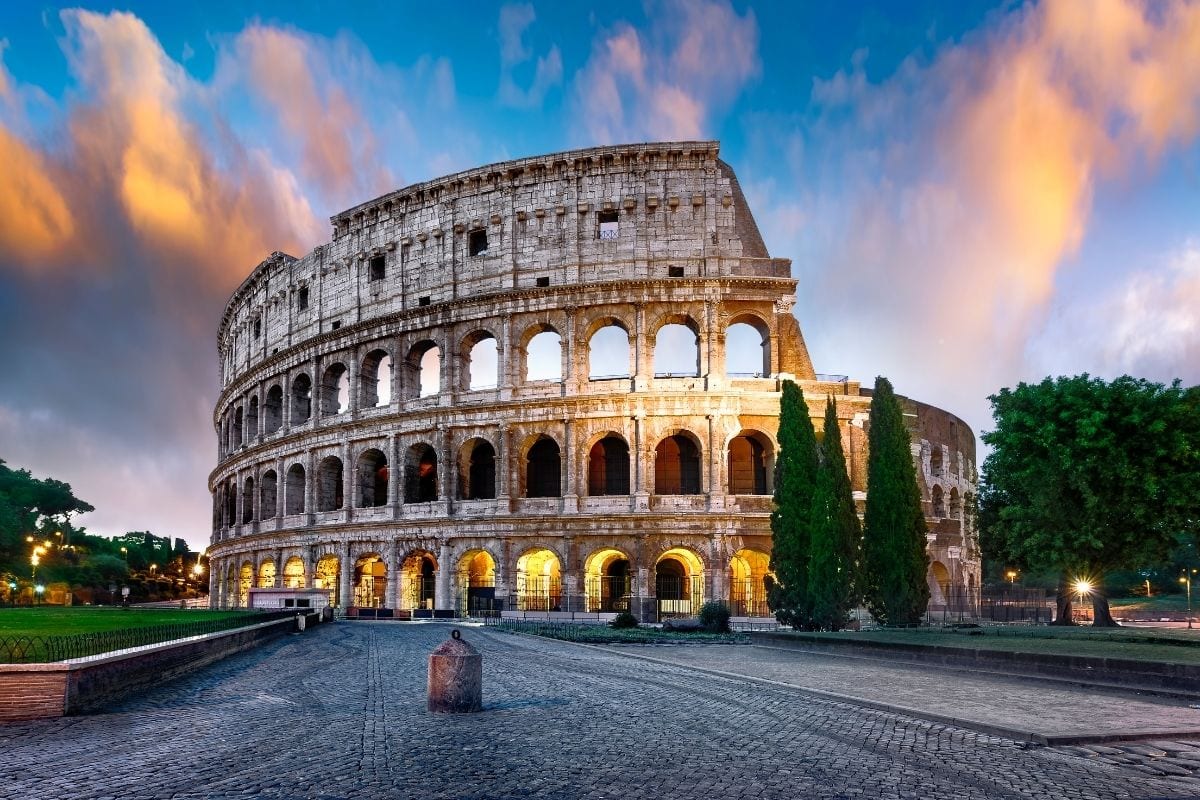 These interesting facts about Rome are a reminder that the Italian capital is full of surprises!

Rome is a city filled with wonder. Everywhere you walk you see incredible historic monuments, churches, fountains and intriguing landmarks. It’s somewhere to explore with your eyes and ears wide open.

While most of us learned about Ancient Rome at school, it’s a whole other experience to walk the streets of the modern city. I loved seeing the Colosseum up close, passing the Roman Forum, then venturing into the Vatican and seeing St Peter’s in all its glory. It brought the tales of the Roman Empire to life!

In between exploring I spent lots of time eating and drinking too. I danced from my morning cappuccinos (never after lunch of course – more on that coming up!) to leisurely lunches, afternoon gelatos, evening aperitifs, and finished the day with delicious homemade Italian food in cute trattorias.

I learned a lot just by being there. Recently though, I wanted to learn more about the Italian capital. I spent time researching and came up with a huge list of interesting facts about Rome. I read fascinating tales about the Trevi Fountain, found out about the diet of ancient Romans and learned all about the geography of the city.

There are some really fun facts about Rome too – things that will definitely make you laugh out loud!

So, whether you’re planning a trip to Rome, or just fancy learning a bit more about the Eternal City, I hope you enjoy these interesting facts about Rome.

20 Fun And Interesting Facts About Rome

Rome is one of the most visited cities in the world

Rome is the most visited city in Italy as well as being one of the top cities for world travellers. In 2018, over 9.7 million people arrived in Rome.

There’s a country located inside Rome

Despite being just 4,700,000 square feet and officially the smallest nation in the world, the Vatican City is its own independent country. It even has its own passports and stamps.

The Pope doesn’t live in Rome

If you were asked where the Pope lived, you’d probably say Rome. In actual fact, his address is in the Vatican City. The country is governed as an absolute monarchy, with the Pope at its head.

Rome’s Trevi Fountain is rolling in it

You might have heard the legend that if you throw a coin backwards into the Trevi fountain, using your right arm over your left shoulder, one day you’ll return to the city. Lots of people enjoy throwing their loose change into the famous fountain, making wishes as they go, but did you know around 3,000 Euros are thrown into the fountain every single day?

Thankfully it’s collected by the charity Caritas, to help those it need. In 2016, the charity claimed that almost 1.2 million Euros was collected from the fountain that year!

Someone took advantage of the Trevi Fountain’s wealth

Roberto Cecelletta was arrested in 2002 for collecting change from the iconic fountain using a small fishing net, a rake and a magnet. He had been doing it for 34 years, and on some days would collect around 850 Euros.

Cats have their own laws in Rome

There are thought to be over 300,000 cats in Rome, and it turns out they have some pretty cool rights too. The 1991 biocultural heritage law says that if five or more cats live together in a natural urban habitat, they can’t be moved. So when you see lots of kitty cats around the Forum and the Colosseum, now you know why!

Rome is home to 280 fountains and over 900 churches. The most famous church in is St. Peter’s Basilica, which is well worth a visit if you’re spending some time in Rome.

Rome didn’t become a part of Italy until 1870

Even the ancient Romans loved to shop

We all know Italians love fashion, but you might be surprised to learn that the first ever shopping mall was built in the city of Rome between 107 and 110 AD. Take a trip to see Trajan’s Market and you’ll see the remains of the elaborate arcade.

It features several floors and would have sold a variety of foods and clothing. The market was commissioned by Emperor Trajan who also had his administrative offices on the upper floors.

Don’t order a cappuccino after 11am in Rome

This is one of those legends passed down by friends and family to people visiting Rome. “Whatever you do, don’t order a cappuccino after 11am, it’s not the done thing!” Well, firstly, you can order one and Italians won’t be totally shocked. But secondly, the reason behind it is all about digestion. Italians consider fresh milk as bad for digestion, so they’re more likely to have simple espressos later in the day or after a meal.

Rome is home to the world’s only pasta museum

It’s pretty likely you’ll eat your body weight in pasta during a trip to Rome, but at the Museo Nazionale della Pasta Alimentari you can learn all about it too.

Inside you can see equipment used to make pasta, learn about inventions that are used today and find out more about why this food is such a staple of Italian food. *This museum is currently closed, but keep an eye on the website for reopening details.*

The River Tiber flows through the city of Rome, and located within it is a tiny island, called Isola Tiberina (Tiber Island). It’s only 270 metres long, so is really tiny. However, it’s got easy access via two bridges – the Ponte Cestio and Ponte Fabricio. On the island you’ll find 16th century hospital Fatebenefratelli.

The Spanish Steps are actually more French and Italian

Surprisingly the Spanish Steps, one of the icons of Rome, were actually designed by Italian architects and built using French money! However, they’re named the Spanish Steps as the Spanish Embassy was located at the bottom of the steps when they were constructed.

The majority of Ancient Rome hasn’t been excavated yet

While a lot of incredible discoveries have been made during the excavation works in Rome, around 90% of the ancient city is buried 30 feet below street level. Discoveries continue to be made, but it’s unlikely much of the city will ever be uncovered as the modern city’s buildings lay on top.

La Piccola Londra (Little London) is located in the Flaminio neighbourhood and was designed by architect Quadrio Pirani at the start of the 1900s. The tiny residential street is only 200 metres long and features colourful terraced houses and with steps leading up to front doors. If you want to see it for yourself, head to Via Bernardo Celentano.

All roads lead to Rome… sort of!

The phrase all roads lead to Rome is a famous one, and once upon a time it was true! During the Roman Empire, all 80,000 km of roads radiated outwards from the capital, and connected numerous parts of the world, all the way from Britain to Turkey. Many of these routes are still used today too.

A recent cartography study looked at the phrase again and mapped out 400,000 starting points across Europe, and found that all routes could reach Rome, even today… so I guess the phrase is still valid!

If you ever hear the phrase pagare alla romana when you come to pay for a meal in Italy, you might be a little confused. It translates as ‘to pay like people of Rome’ and actually means to split the bill equally.

Rome has a few delicacies that might turn your stomach

Italy’s food scene attracts lots of tourists, but there are a few local delicacies which might not suit all tastes. A popular local dish is Tripa alla Romana, which began as peasant food but is now a staple of Roman cuisine. It’s essentially tripe (lining of a cow’s stomach) that is slowly stewed in a tasty Italian tomato sauce, topped with pecorino cheese. By all accounts, it’s tastier than it sounds!

Ancient Rome had a few delicacies too

While the tripe might not be to your taste, wait until you hear what they ate back in ancient times. The wealthy in the city enjoyed decadent meals of stork, ostrich and even flamingo. Even a cute kittle dormouse wasn’t safe – they liked those stuffed with pork!

Back in the days of Ancient Rome, some gluttonous types would eat so much that they had to vomit between meals in order to continue feasting!

Even the medicine was gruesome in Ancient Rome

Gladiator blood was a popular medicine, prescribed by doctors for a number of issues. It was believed to have extra special properties. Struggling to conceive? Drink some gladiator blood. Suffering from epilepsy? Have a glass of gladiator blood. Who knows if it actually worked, but you won’t see it in any pharmacies in Rome today!

I hope you’ve enjoyed these interesting facts about Rome. If you’re planning a trip to Italy soon, don’t forget to check out all of my Italy travel blogs. Plus, for a really authentic experience, check out my guide to the best hidden gems in Italy.

Enjoyed these Rome facts? Pin this travel blog for later….