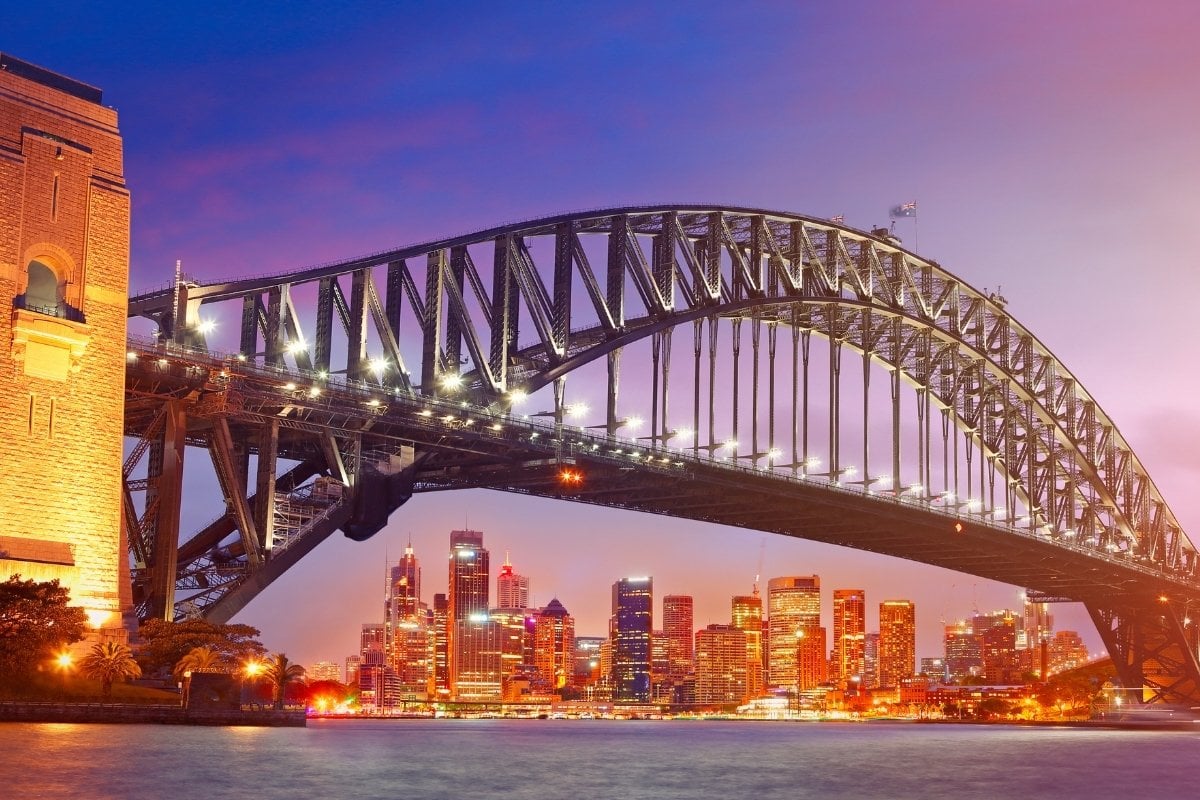 From its impressive architecture to exciting stunts, there are plenty of fascinating facts about Sydney Harbour Bridge!

The largest steel arch bridge in the world, the Sydney Harbour Bridge is one of Australia’s most famous man-made landmarks. Ferrying foot, rail and road traffic from Sydney’s centre to its suburbs, the bridge is a crucial part of the city’s infrastructure.

However, this epic steel bridge is so much more than a simple transport route. Look a little closer and you’ll find that Sydney Harbour Bridge holds plenty of unique and fascinating secrets! To inspire your next adventure down under, I’ve put together a list of the most fun, interesting and weird facts about Sydney Harbour Bridge.

Some of these facts about Sydney Harbour Bridge will definitely surprise you – read on to find out more!

So, how old is the Sydney Harbour Bridge? Construction began in July 1923, and it took eight years of hard toil to finally bring the project to completion in March 1932. The bridge will celebrate its official centenary in 2032, which will no doubt involve a big party!

It took 1400 workers 8 years to complete the bridge

The construction of Sydney Harbour Bridge was a colossal effort, requiring the skills of 1400 workers over 8 years. They put in place 53,000 tonnes of steel and used over 6 million hand-driven rivets to put the bridge together. The job was finished with 272,000 litres of paint.

The towering arch clocks in at a whopping 134m high, and it spans 503m across Sydney Harbour from Dawes Point to Milsons Point. It might not be the longest bridge in the world (this title goes to the Port Mann Bridge in the US), but it is certainly the largest of its kind.

The bridge is continuously being painted

This Sydney bridge is constantly being painted, both to keep it looking fresh and to protect the structure from the elements. It takes a team of 100 people and 2 robots to apply the paint, and the bridge is so large that by the time they have finished, it’s time to start the process again!

Paul Hogan once worked as a rigger on the bridge

You can climb the arch on Sydney Harbour Bridge

Australia is a paradise for thrill seekers, and Sydney is no exception. One of the most popular things to do in Sydney is to climb up to the peak of the arch on Sydney Harbour Bridge. Follow in the footsteps of over 3 million visitors since 1998, when the Bridge Climb opened, and enjoy the spectacular view from the top. You’ll get a stunning vista over the Sydney Opera House, the North Shore and the Central Business District. However, you’ll need a head for heights – this one isn’t for the faint hearted!

The arch of the bridge changes height

The towering arch of Sydney Harbour Bridge can actually change height depending on the weather, sometimes up to 18cm either up or down! This is due to changes in atmospheric conditions, with either extreme heat or cold causing the bridge to expand and contract.

Almost 80% of the steel used for the bridge (which weighs around 52,800 tonnes) was imported from the United Kingdom, meaning that it had to travel halfway around the world before it was put to use in the construction of the bridge.

The four pylons on the bridge are completely decorative

Sydney Harbor Bridge is known for its four towering pylons at each corner, which create an imposing sight and give the bridge its impressive stature. However, one of the most interesting facts about Sydney Harbour Bridge is that these four pylons are actually completely decorative, and serve no other purpose than to enhance the style of the bridge’s appearance!

It has a weird nickname

One of my favourite fun facts about Sydney Harbour Bridge is its nickname – Sydney residents affectionately call it the ‘Coat Hanger’ due to its distinctive curvy shape.

The bridge was technically opened twice

The opening of the Sydney Harbour Bridge was a major event, with an extravagant pageant designed to mark Australia’s emergence from the difficult years of the Depression. However, just before the official opening, Francis de Groot, a member of the extreme right-wing New Guard organisation, emerged from the crowd on horseback and slashed the ribbon with a sword.

The New South Wales Premier, Jack Lang, who was supposed to cut the ribbon, was so angry that he arrested De Groot and strung a new ribbon across the bridge so that he could officially open it.

Accidents were unfortunately common during the construction of the bridge, but one of the most amazing survival stories concerns a construction worker named Vincent Kelly. In October 1930 he was working on the bridge when he slipped and fell 55m into the harbour below.

Miraculously, he managed to somersault in mid-air and land in the water feet first. He survived with a few broken ribs and was later awarded a medal by the company responsible for overseeing the works.

16 people died in the construction of the bridge

The construction of Sydney Harbour Bridge required a monumental effort, and conditions on the project were often dangerous. Sadly, 16 people lost their lives in accidents over the course of the 8-year construction period.

The granite used for the foundations for the bridge had to be quarried in an area in the south coast of New South Wales. In order to achieve this, over 250 stonemasons with the right technical skills, together with their families, were brought to Sydney from Europe, mainly from Scotland and Italy.

Australia didn’t finish paying for the bridge until 1988

The construction of the Sydney Harbour Bridge was eye-wateringly expensive, with a final tally close to £10 million. The full debt wasn’t paid off until 1988.

The arch nearly fell apart before it was finished

The bridge held the Olympic Rings during the Sydney 2000 Olympics

During the Olympic Games held in Sydney in 2000, the Olympic Rings were suspended from the bridge, forming the centrepiece of the fireworks display to mark the closing ceremony.

It’s been home to some daredevil stunts

In 1973, famous daredevil and tightrope walker Philippe Petit strung a wire between the two pylons at the southern end of the bridge and successfully traversed it. He would go on to walk a wire between the twin towers of the World Trade Center in New York the following year.

It was inspired by New York City’s Hell Gate Bridge

The unique design of Sydney Harbour Bridge was inspired by New York’s Hell Gate Bridge, so named for the dangerous channel that it bridges. Sydney Harbour isn’t quite as perilous as the Hell Gate in the East River, but the two bridges share many features, including an elegant arched shape and imposing decorative pylons.

Sydney arguably has the best New Year fireworks in the world, usually centred on the bridge itself and surrounding Port Jackson. Sydney Harbour Bridge is illuminated with an additional rope light display that usually reflects the theme of that year’s celebrations. Some fireworks even tumble downwards into the water, creating a dazzling waterfall effect.

The bridge contains a museum

The south east pylon of Sydney Harbour Bridge is open to the public, and it’s possible to climb the 200 steps to the top for a wonderful view over the harbour. However, one of the most interesting facts about Sydney Harbour Bridge is that the pylon actually includes a small museum which is crammed with interesting information about the bridge and its history. You can even see some rare video footage from the early years of construction. If you’re not sure whether you want to brave the full Bridge Climb to the top of the arch, the Pylon Lookout is a good alternative!

You can even get married on Sydney Harbour Bridge

The Bridge Climb isn’t just the preserve of tourists and celebrities looking for the best view – it’s also possible to tie the knot from the top of the Sydney Harbour Bridge! The first couple to get married on the bridge were Stephen Tierney and Claire Tullan, from Scotland, who were married in June 2008. Ten years later, the first gay wedding on the bridge took place when Warren Orlandi and Pauly Phillips celebrated their marriage at dawn from the top of the arch.

Many visitors are drawn to Sydney Harbour Bridge again and again, but the record for the most climbs is held by 89-year-old Lloyd Poulton who has made it to the summit more than 125 times (and counting!).

I hope you enjoyed these weird and wonderful facts about Sydney Harbour Bridge. It’s such an icon of the city!