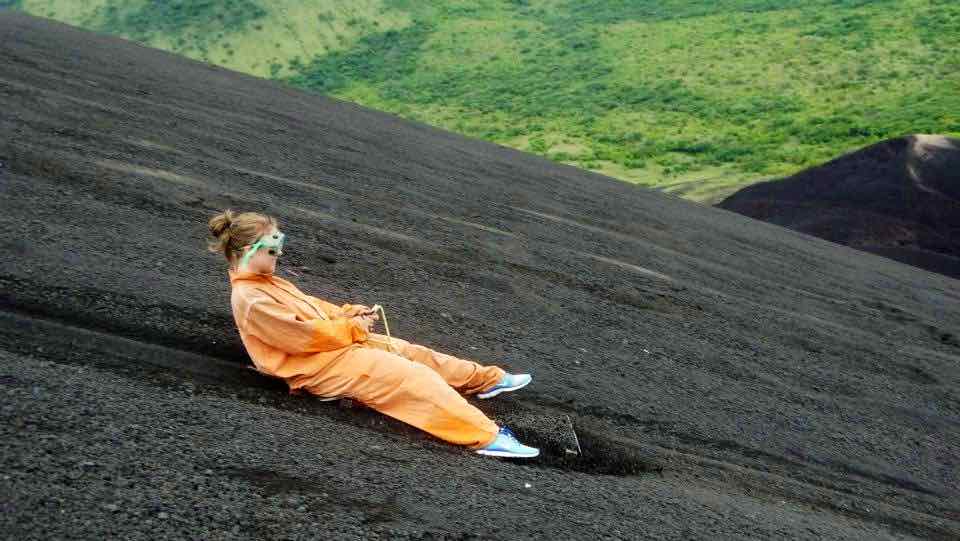 From how the tours run and how brave you need to be, to what to expect on the day, find out all about volcano boarding in Leon, Nicaragua.

We travelled by a small plane from Roatan island to the capital of Honduras, Tegulcigalpa – then headed south across the Nicaraguan border to León. What is there to do in León? One of the most bizarre extreme sports I’ve ever heard of – volcano boarding.

The tour organised by Bigfoot Hostels starts with a drive down bumpy roads on the back of a large open truck. Once there, it’s time to hike for one hour up the side of the active Cerro Negro volcano carrying a wooden board. When I reached the 2388 ft high summit, I peered over the edge and questioned life for a second, and why I would ever pay to fling myself down the side of it, especially when clinging on for dear life to a piece of wood and a tiny rope handle. Then I donned a Guantanamo orange suit, goggles, and perched on the edge of the ash and rocks, ready to push off. Volcano boarding didn’t come about by accident. In 2005 an Australian tour guide moved to the area and saw an opportunity. He grew up sand boarding back home and wondered if the same principles could be applied on a volcano. He trialled everything from mattresses to cupboard doors to fridges… And finally created the volcano board. Similar to a snowboard or skateboard in style, with metal and formica on the bottom to increase speed when combined with friction from the rocks and ash. There is no track, just a small groove in the ash from the previous volcano boarders that day. The rest is up to you to control. Speed is increased by lying back as flat as possible. Steering is done by placing your left or right foot out and digging in gently to the rocks. The goggles protect you from some of the rocks flying at your face, but you can still expect to be pretty grubby by the end! Towards the base of the volcano two guys wait with a speed gun ready to record your speed. By that point I had fallen off four times, filled my board up with rocks, and almost ground to a halt. Well, if 24 kph is grinding to a halt! The record speed that day was 65 kph. I left relieved I had survived and wearing the t-shirt to prove my bravery. At around $30 USD it wasn’t a huge price to pay for an experience very few people will have in their lives!

It’s a must do activity if you’re in the area, and I’m glad I did it, but I can’t say I’ll be getting back into the Guantanamo orange jumpsuit again anytime soon!