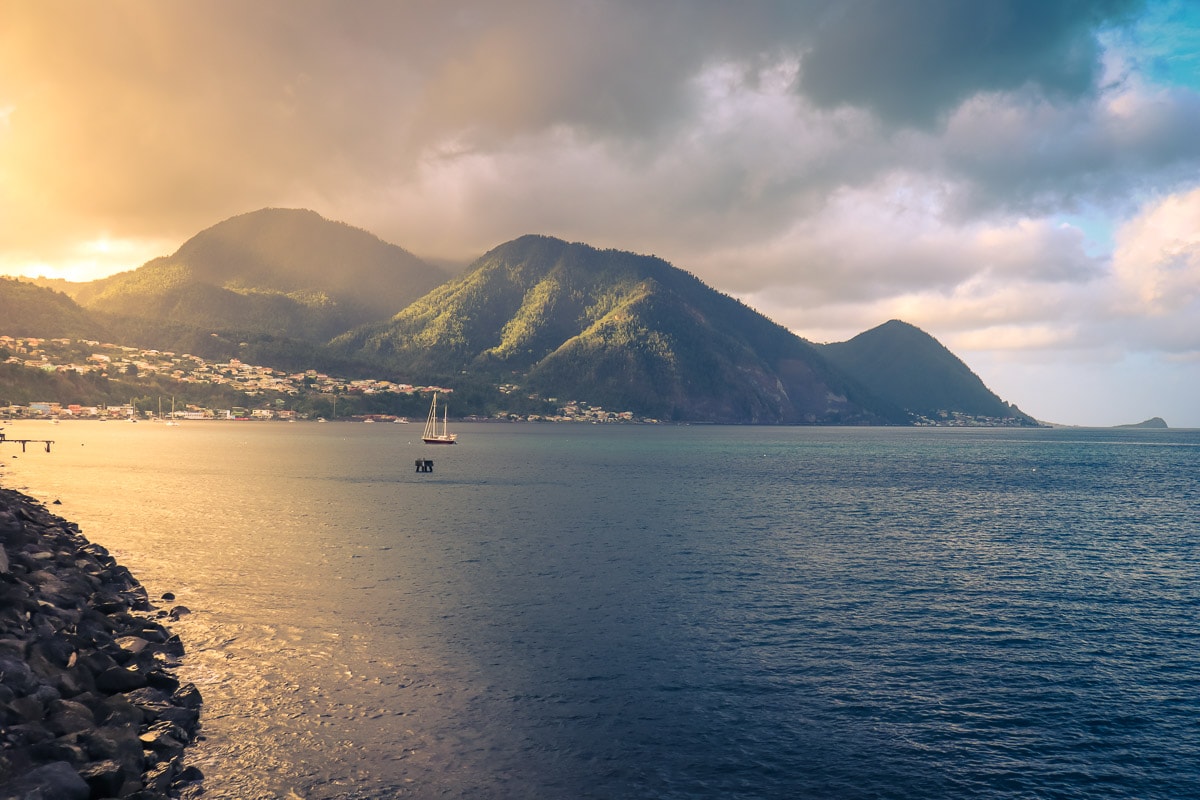 From when to visit and how much things cost, to a few island surprises, these Dominica travel tips will help you plan your trip to this special Caribbean island.

Dominica might be known universally as the nature island, but I’d describe it as the island of surprises. Surprising landscapes, surprising activities and… surprising prices! This is a Caribbean island, but not like the others you know.

If you’re planning a trip, I’d recommend reading my guide to the best things to do in Dominica, which gives you the lowdown on the island’s attractions and beauty spots. But first, scroll on to read a few Dominica travel tips to make your first trip to the island totally hassle free!

17 Things To Know Before Visiting Dominica

Don’t expect to laze on the beach… although you can!

While Dominica has plenty of lovely beaches, due to it’s volcanic origins, the majority of the island’s beaches have black, brown and silver sand. They’re still very pretty, with palm trees and clear, Caribbean waters, but perhaps a little different to the Caribbean postcard you have in your minds.

Instead, hike into the mountains, go whale watching, visit the island’s waterfalls, take a dip in the Emerald Pool and learn to cook Caribbean cuisine – the options are endless, so you’ll never be bored!

READ MORE: Top things to do in Dominica, Caribbean

Dominica is NOT the Dominican Republic. Not even close!

I feel like an idiot for writing this, but when I told people I was visiting Dominica, they thought I meant the Dominican Republic… or that Dominica was the capital of the DR! Nope, they’re completely different islands, with different cultures, landscapes and reasons to visit. Make sure you book a flight to the right place!

Dominica is known as the nature island

As we landed in Dominica, I could see exactly why it’s known as the nature island! With lush rainforests, incredible volcanic landscapes and rugged bays, it looked wild – like a little Jurassic Park! There are nine volcanoes, 365 rivers, 18 named waterfalls and one boiling lake (the second largest in the world after Frying Pan Lake in New Zealand). If you love adventures, this is the island for you.

Dominica is one of the cheaper Caribbean islands

First up, I’ll admit I’ve always found the Caribbean an expensive part of the world to travel around, especially compared to regions like South East Asia and Eastern Europe. Despite having amazing ingredients on the doorstep, a lot of items still have to be imported. Plus, once you’re on the islands, you become a captured market. Particularly on smaller islands, there aren’t many tour companies, so the ones that exist set the price they want, and that’s what you pay.

That being said, I found Dominica to be cheaper than most Caribbean islands I’ve visited (Barbados, Antigua, St Kitts, Cuba, St Martin). Here’s a quick rundown of the prices…

How much do things cost in Dominica?

Also, there’s a great value pass you can buy if you plan to visit multiple attractions in a week. About that…

Dominica has never been associated with luxury holidays. Most people visit because they love the great outdoors. They want to go hiking, diving and explore the abundant nature of the island. Those travellers aren’t usually in need of a personal butler or swim up bar, and are happy in a more rustic hotel.

All that has now changed with the opening of Cabrits Resort & Spa Kempinski Dominica, just north of Portsmouth (which opened in 2019). I passed it one day, and saw the vast resort being constructed. It’s in a beautiful location, close to Cabrits National Park, in its own sheltered bay. Rumour has it, the presidential suite is around $15,000 a night – no doubt attracting a luxurious style of traveller to the island.

Just a few minutes away (and also under construction during my visit) was Cabrits Hotel Resort and Spa, which has been financed by the Kingdom of Morocco as a gift to Dominica. It’s in another lovely location, with a beautiful view over Portsmouth.

Dominica hit the headlines after category 5 Hurricane Maria swept over the island in September 2017. It was regarded as the worst natural disaster on record for the islands in the region. I was actually supposed to visit in October 2017, but the trip was cancelled to allow the island time to recover. And you know what? It has. Lots of people told us that they learned lessons about construction in the aftermath of the hurricane. It was also an important time to look at the island’s economy and industries. With a combination of positivity and hard work, the island has bounced back.

During my visit in July 2019 some evidence remained, but all major attractions were open, cruise ship schedules were back to normal, and Dominica was definitely ready to welcome tourism again.

Don’t worry though – it’s a very simple journey! If you’re visiting from the UK, you’ll need to fly to Antigua (with Virgin or British Airways) and then catch a LIAT flight over to Dominica. The flight from Antigua to Dominica only takes 30 minutes, and on a clear day, the views are amazing. The quickest routes I found from London were around 12 hours (including the transfer). Plus, you don’t need a visa to visit!

You’re guaranteed to see the Queen in Dominica… seriously!

The Eastern Caribbean Dollar is used in:
Antigua and Barbuda,
Anguilla,
Dominica,
Grenada,
Montserrat,
Saint Kitts and Nevis,
Saint Lucia,
and Saint Vincent and the Grenadines

It’s worth downloading an app like XE Currency to convert currency on the go, but as a guide: 1 USD = 2.70 ECD = £0.80
While not exact, I spent the week dividing the ECD amount by 3 to work out the rough cost in £.

English is the principal language in Dominica

It’s the official language of the island, but you might hear a little Creole spoken too.

Sadly, much of the indigenous Kalinago language has been lost, but there are efforts by the Kalinago people to preserve it, and you’ll occasionally hear ‘Mabrika!’ (welcome) when you meet someone.

The ferry port in Roseau has regular ferries which connect Dominica with its neighbouring islands. You can reach Guadeloupe, Martinique and St. Lucia in just a few hours. There’s more info on the ferry website, including timetables and prices. Often it’s cheaper to travel by ferry than to fly, and by the time you’ve travelled to the airport, you might actually find it quicker going by boat.

Peak cruise season in Dominica runs from October to May

The big cruise shops visit Dominica from the autumn to spring / summer, docking in Roseau. Carnival, Princess, Silversea, Celebrity, Cunard, Azamara and Royal Caribbean all sail there, spending one day on the island. If possible, I’d recommend visiting out of season, as I did. Rather than fighting the crowds at beauty spots like Trafalgar Falls and the Emerald Pool, you could have them all to yourself!

The Waitukubuli National Trail is a 114-mile hiking trail which guides you through many of the island’s most impressive landscapes. If you were to hike the entire trail from Scotts Head in the south to Capuchin in the north you’d pass through Kalinago villages (where the indigenous people live), up volcanoes, past waterfalls, cross several rivers and more. It’s worth noting that a few parts of the trail are still closed after the effects of Hurricane Maria.

Dominica is the whale watching capital of the Caribbean

If you’re visiting the island, you have to book a whale watching tour. Over 20 species have been spotted in the waters around the island, but the big draw is the pod of sperm whales. There are said to be around 300 in total, and Dominica is the only country in the world where they can be spotted all year round.

Everybody knows everybody in Dominica

I’m writing this with a smile on my face, as some of my happiest memories from my time on the island are from spending time with the locals. We had some great drivers who took us to see some of the main attractions, and they seemed to know everyone!

They’d stop to say something out of the window, honk the car horn to get a friend’s attention and shake hands with people left, right and centre! It was lovely to see how close knit the island’s community is. As we headed up to a cookery class in the hills, we passed a car, and our driver mentioned the person driving was his old secondary school teacher!

In general I found people to be friendly and welcoming. They were passionate about their home and keen to share their stories. This left me with a real feeling of warmth towards the island.

Dominica’s water is safe to drink

I always look up whether the water is safe to drink in advance and I’m SO relieved when it is. Dominica’s water is safe to drink, however some people don’t like the taste. Bottled water is available everywhere, and most restaurants will offer you the option of a proper bottle or a glass of water, which is usually filtered tap water.

Dominica is very different to Antigua

These two islands are just a 30 minute flight apart, but couldn’t be more different!

Rather than pick one or the other, I’d recommend a multi-stop holiday with four days in Antigua followed by four days in Dominica. You’ll get the best of both!

I hope you’ve found my guide to Dominica travel tips helpful. If you have any questions, you can leave them in the comments below.

Don’t forget to check out my other Dominica travel blogs:
Top Things To Do In Dominica
Whale Watching In Dominica

2 thoughts on “17 Things To Know Before Visiting Dominica: Travel Tips For A Hassle Free Holiday”