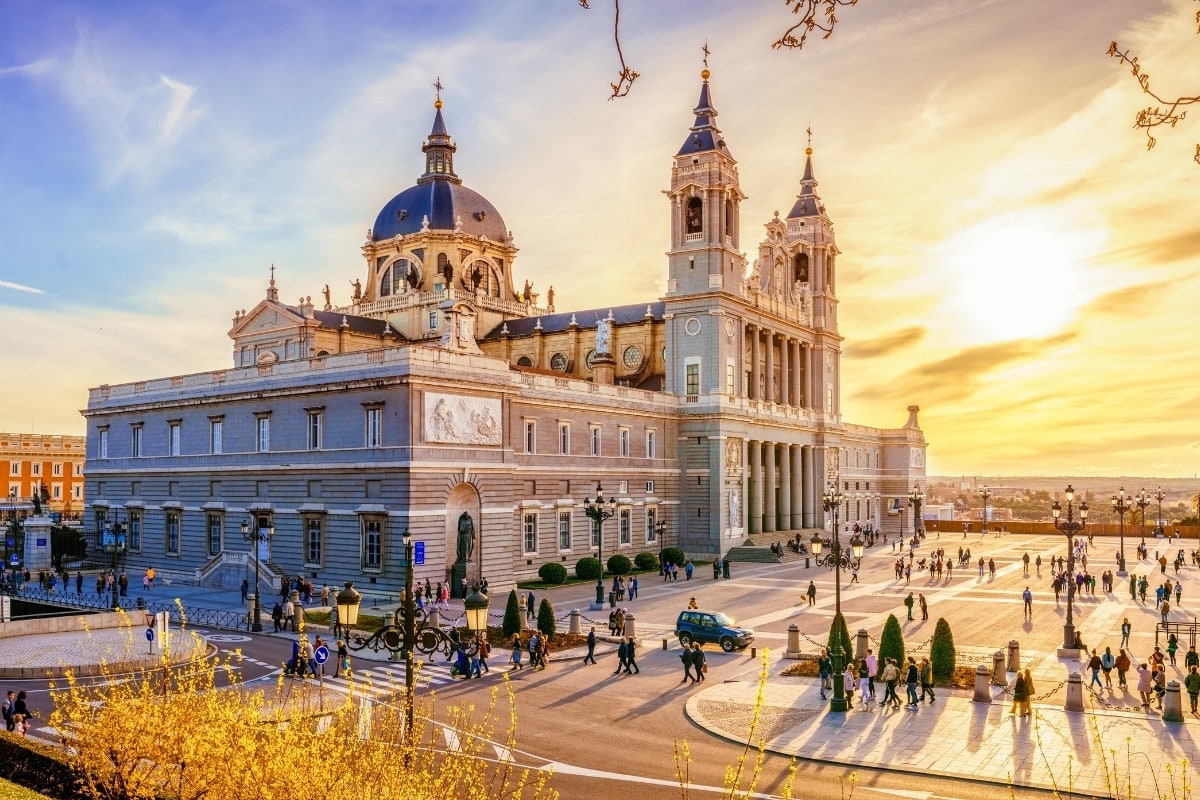 Spain’s dazzling capital is filled with intriguing stories and hidden secrets. These interesting facts about Madrid will definitely surprise you!

Madrid is a wonderful, and often overlooked city. Tourists tend to focus on destinations like Barcelona and Seville, perhaps thinking Madrid is more of a business hub. Yet, Spain’s vibrant capital offers a lot.

Known for world-class galleries and museums, fantastic shopping, impressive architecture and fabulous nightlife, there are plenty of reasons that make this Madrid a bucket list destination.

However, there’s more to the Spanish capital than its bars, restaurants and clubs. with bustling markets, ancient temples, tiny restaurants and medieval ruins, there are surprises around every corner.

Want to know more? Here are some of my favourite fun facts about Madrid.

Fun and Interesting Facts About Madrid

Madrid is thought to be over 2000 years old

Traces of occupation along the Manzanares River date back to the Visigothic, Roman, and even prehistoric times. However, the most definitive evidence that we have for a fully-fledged settlement in what is now Madrid comes from the Muslim period in the city’s history.

The Umayyad emir Muhammad I built an impressive fortress designed to protect the lands south of the river from incursions from the northern kingdoms of León and Castile in the 9th century. This later developed into a flourishing town. One of the most interesting facts about Madrid is that the old walls of the Muslim fortress can still be seen today.

The etymology of Madrid’s name is shrouded in myth. According to legend, the original name of the city was ‘Ursaria’, a reference to the large number of bears that once inhabited the region.

Some scholars believe it comes from a Roman settlement, ‘Matrice’, established on the Manzanares River.

However, the earliest recorded name of the town is ‘Magerit’, from the Arabic meaning ‘place of water’, and this is the most likely explanation for how the city got its name.

It’s one of the highest capitals in Europe

This fact about Madrid really surprised me too. It may not seem like it, but Madrid is actually one of the highest capital cities in Europe, clocking in at an elevation of 667 m above sea level.

The only European capital with a higher elevation is Andorra la Vella, the capital of the Principality of Andorra, which is located high in the Pyrenees.

It’s the second biggest city in the European Union

Madrid is one of Europe’s megacities, home to a staggering 3.2 million people. The only EU city with a higher population is Berlin, with 3.6 million.

Until its departure from the EU in 2020, London was the most populous EU city, home to almost 9 million people.

Madrid has a unique coat of arms

The coat of arms of Madrid is one of the most unique and strange emblems in the world, consisting of a bear reaching up to a strawberry tree, surrounded by the seven stars of the constellation ‘great bear’ (Ursa Mayor).

The image of the bear had been linked to Madrid since the medieval period, when knights from the city rode into battle at Las Navas de Tolosa carrying a banner that depicted a bear.

It is not known when or why the strawberry tree came to be associated with Madrid, although its Spanish name, madroño, bears some resemblance to madrileño, the name for Madrid’s inhabitants.

Whatever the reason, this cute image is intertwined with Madrid’s history and identity, and you can see a statue of the bear and the tree today in Puerta del Sol!

Although Madrid grew to a position of some importance in the Middle Ages, it didn’t actually become Spain’s capital until 1561, when Phillip II moved his court to the city and it became the de facto centre of royal power.

Prior to this the Spanish monarchs used to move their court around their kingdoms, constantly changing position.

Madrid is home to the oldest restaurant in the world

This fact about Madrid might surprise you! Restaurante Botin, founded in 1725, is officially the oldest restaurant in continuous operation in the world! It’s known for fantastic local delicacies such as suckling pig, a dish that Ernest Hemmingway wrote about in glowing terms when he visited back in the 1920s.

The secret behind these succulent dishes is the original wood oven, which was constructed in the early 18th century  and is powered by a fire that hasn’t been extinguished since the restaurant first opened. It’s even thought that the artist painter Francisco Goya may have washed dishes in the restaurant as a young man!

Madrid has the only monument to the devil in the world

Step into the beautiful, lush Retiro Park in the heart of Madrid, and you’ll come face to face with the only statue of the devil in the world! Known as the ‘Fountain of the Fallen Angel’, and sculpted by Ricardo Bellver for the World’s Fair in Paris in 1878, it depicts the moment of Lucifer’s fall from heaven.

The statue is known for the realism and anguish depicted on the angel’s face and it’s the only monument in the world to depict the devil in this way.

Madrid is an art-lovers paradise, and many visitors flock to the so-called ‘Golden Triangle’: the Prado Museum, the Thyssen-Bornemiszia Museum and the Museo Reina Sofia.

The Prado Museum is widely considered to have one of the best collections of European art in the world, and is so vast that only a seventh of its 25,000-strong collection can be displayed at any one time. Find out about the other best museums in Europe!

It’s one of the sunniest cities in Europe

Madrid averages over 300 days of sunshine per year, making it one of the sunniest cities in Europe!

Although the winter months can be quite cold, the skies are usually clear, making it a fantastic place for a city break at any time of the year. If you’re looking for a vitamin D hit, head to Madrid.

You might have heard ‘all roads lead to Rome’, but it seems in Spain all roads lead from Madrid. If you visit the Puerta del Sol you’ll see a small sign in the square showing Kilometer 0 with the 6 main roads branching off from Madrid.

It’s one of the greenest cities in the world

This Madrid fact surprised me a little as I don’t think of Madrid as being a really green city. However, it turns out, with 300,000 trees and 6400 hectares of green space, it’s the second most sustainable city after Tokyo. It’s also home to more trees and green space per inhabitant than any other European city.

It’s a great city for seafood

This is one of the most surprising facts about Madrid. The city is home to the biggest seafood market in Europe, and the second largest in the world (Tsukiji Fish Market in Tokyo takes that prize!) Unfortunately MercaMadrid isn’t open to the general public. You have to work there or be a serious buyer. You can book onto tours though, if you fancy seeing behind the scenes.

Considering how far Madrid is from the coast, it’s surprising to have such an epicentre for seafood in the heart of the country!

There’s something surprising about the Cibeles Fountain

If you’ve visited Madrid, you’ve probably seen the Cibeles Fountain in the Plaza de Cibeles. However, you might be surprised to hear that the fountain has been designed to flood the Bank of Spain’s chamber of gold if anyone breaks in!

Apparently, if an intruder made their way into the vault 38 metres below ground, the fountain’s water would flood the rooms and corridors.

The royal family don’t live in the Palacio Real

Spain’s royal family is one of the most famous in the world, and many visitors flock to see the sumptuous royal palace in the heart of the city: the Palacio Real.

However, the current residence of the Spanish monarchs is actually the Palacio de la Zarzuela, built in 1630 on the outskirts of Madrid, close to the Royal Palace of El Pardo.

Football is a pretty much a national religion for madrileños and the city is home to one of the most successful clubs in the world: Real Madrid. It takes its name from the royal (‘real’) blessings bestowed on the club multiple times over the course of the 20th century (which may also explain its incredible success!)

Born in 1849 in Puebla de Alcocer in Extremadura, Augustín Luengo Capilla grew to a height of 7 feet and 8 inches, making him one of the tallest Spaniards on record.

After his tragic early death, his skeleton was given to the head of the National Museum of Anthropology (with Augustín’s prior consent), and it remains on display in the museum today, alongside countless other fascinating human artefacts.

The old Atocha train station is now a lush garden

This is one of the most fun facts about Madrid. A unique and beautiful place to visit in the city is the botanical garden housed inside an abandoned section of Atocha train station.

Filled with lush tropical flowers and rare trees and plants, a trip here is one of the best things to do in Madrid for a moment of serenity during a busy commute!

Madrid is home to an ancient Egyptian temple

You might be forgiven for doing a double take when you arrive at the incredible Temple of Debod, close to the Plaza de España. This enigmatic monument stood for thousands of years in Egypt’s Nile Valley before travelling to Madrid in 1968 as a thank-you gift for Spain’s assistance in saving historic Egyptian monuments during the flooding of the Aswan Dam.

I recommend visiting at sunset when the temple and surrounding waters glow in the beautiful light.

Madrileños are known as ‘cats’ because they stay out all night

Madrid is known throughout Europe for its buzzy nightlife. From my time there I remember the city was simply packed with bars, clubs and restaurants. Many of them stay open until the early hours.

In fact, Madrid has such a reputation for partying, that the local inhabitants are often called ‘gatos’ (cats) because they sleep all day and stay out all night.

It’s one of the most popular tourist destinations in Europe

Over 6 million visitors visit Madrid each year, to take advantage of the fantastic nightlife, world-class art galleries and museums, and stellar shopping. Why not make Madrid your next European getaway destination – after all, 6 million people can’t be wrong!

I hope that this list of interesting facts about Madrid has inspired you to consider the Spanish capital for your next European city break! If you’re looking for tips to plan your trip, don’t miss my guide to where to stay in Madrid, and my suggestions for spending 24 hours in the city.