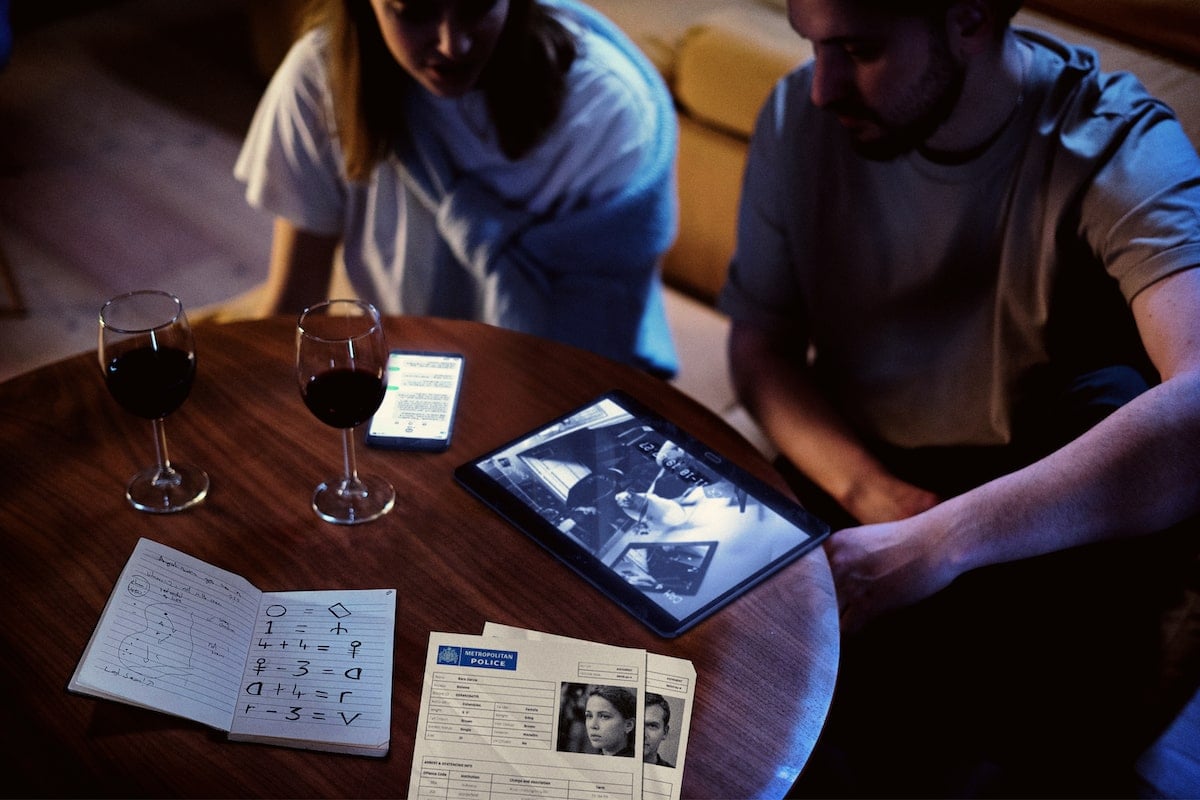 Find out about the UK’s newest interactive story game – Moriarty’s Game: A Killer In The Hive by HiddenCity.

Remember when lockdown hit and we were all desperate to find ways of gathering our friends together online? We hosted quizzes via Zoom, had Friday night beers on Houseparty and my fiancé even had a virtual stag do! It was an odd time, but we were all looking for forms of entertainment that we could enjoy from the comfort and safety of home.

All of a sudden, we could immerse ourselves in the fun of a night out, while wearing our pyjamas, only staggering distance from bed. We adapted. We had to!

I think one of the greatest ventures into virtual entertainment has been in the world of escape rooms. Being an escape room addict (I absolutely LOVE them!) I was excited to try the new online versions. I rounded up my favourites in my post about the best online escape room experiences here.

The latest interactive story game to be created is by HiddenCity – a UK company which specialises in treasure hunt style experiences in London. With Moriarty’s Game: A Killer In The Hive, they were going fully online. Yes, this is another experience you can enjoy while wearing pyjamas! Time for the lowdown…

What is Moriarty’s Game: A Killer In The Hive?

In the game, I was inducted into a company called HIVE – a government-created programme aimed at utilising the power of private citizens in tackling crime. I became a field agent, who had to assist a private investigator in her attempt to track down a criminal mastermind and infiltrate a criminal syndicate.

Sounds intense huh? Well, it was!

How do you play this interactive story game online?

All you need to play the game is a smartphone with a UK phone number. It helps to have a second device or a laptop handy too, so that you can cross reference items of evidence along the way.

To play this interactive story game online, you need to sign up here. It’s £11 per device to play, which I think is great value. To heighten the fun, you can arrange to play against your friends – set up a few teams and see who gets the quickest time!

The game is very cleverly designed. The main communication is via real-time text messages and phone calls. It feels like you’re liaising with real people as you’re playing, which really add to the intensity of the experience!

How does the game work in Moriarty’s Game: A Killer In The Hive?

I don’t want to give away too much of the storyline, but as a rough overview, the game is about finding criminals and bringing them to justice. My role was as a field agent, so a lot of my job involved planning and researching, before giving the information to the private investigator.

In terms of the game elements, there were several things to decipher along the way. To find the answers we had to review criminal records, watch secret webcams and search for locations on maps. There were some tricky codes to decipher and the game involved a lot of lateral thinking.

My review of Moriarty’s Game: A Killer In The Hive

I played this interactive story game online with my partner and we loved it! We completed the game in 54:18. Almost an hour’s entertainment for £11 seems like great value to me.

We loved how immersive the game was. For the entire time we were playing we were locked into trying to solve the puzzles and decipher the clues. There were a few really tricky sections, even for escape room veterans like us.

One of the puzzles had us really scratching our heads, but I don’t want to reveal anything else. When you play it, you’ll see what I mean!

Once we finished, we were emailed a link to see our final time and check the leader board. There was also a breakdown of how long it took for us to solve each of the clues. If you’re playing with multiple players across several teams, it’ll show you who won each clue, as well as your overall times.

We really enjoyed playing this game. While it’s not a traditional online escape game (as the end goal isn’t to escape) it still uses a similar game play and style of puzzle. I’d definitely recommend it for an evening’s entertainment.

Click here to find out more about Moriarty’s Game

2 thoughts on “Moriarty’s Game: A Killer In The Hive by HiddenCity”