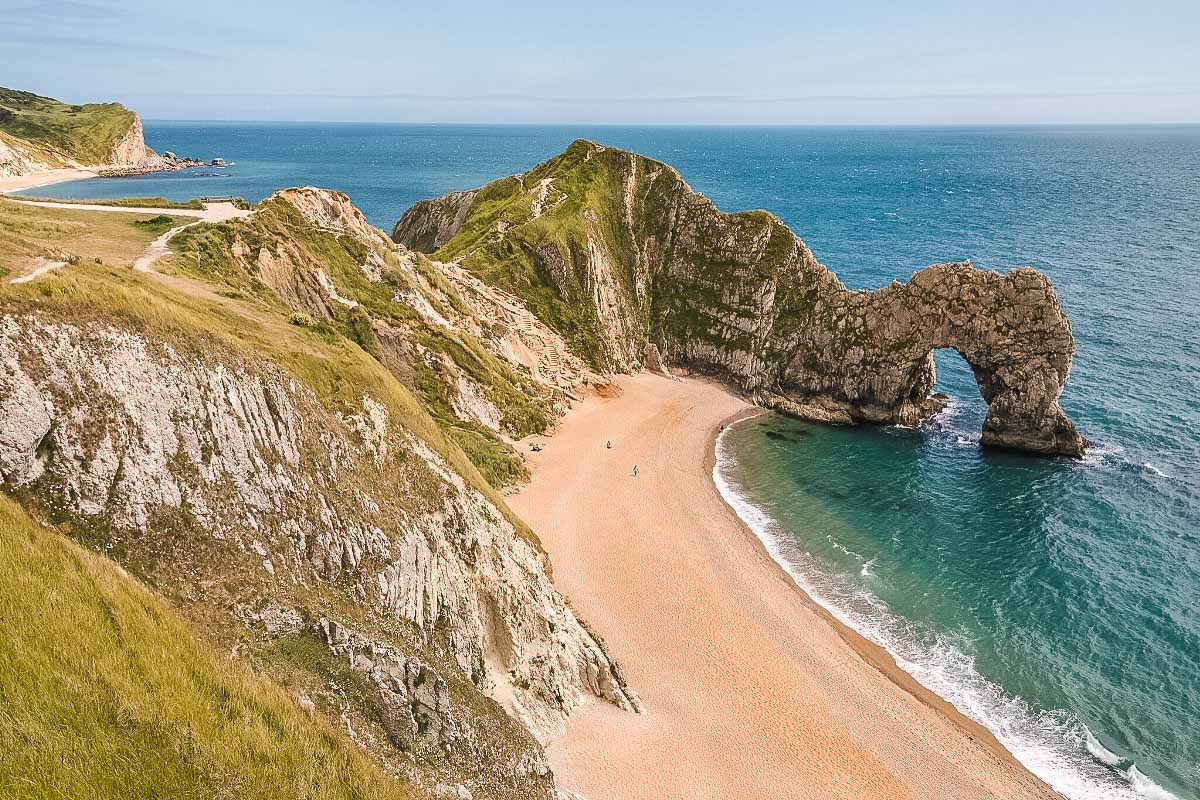 Visiting Durdle Door is an absolute must if you’re spending time exploring Dorset.

The most famous spot on Dorset’s Jurassic Coast, Durdle Door is an impressive natural limestone archway standing in the sea. After seeing so many photos on Instagram over the years, I was really excited to see the sight for myself!

If you’re thinking of visiting Durdle Door for the first time, this guide is packed full of information to make the most of your trip. Find out how it was formed and why you should visit, plus where to park, where to stay and some great walks in the area.

How was Durdle Door formed?

When you see Durdle Door for the first time, you’ll be amazed by the perfect arch. It’s unusual to see something carved by nature rather than the human hand!

The arch has been formed over thousands of years, as the waves eroded the Portland limestone, creating a hole in the centre. It’s located on Dorset’s famous Jurassic Coast (a World Heritage Site in its own right) where you’ll find some of the most epic scenery in the country.

As for its name? The name Durdle comes from an old English word ‘thirl’, which means to pierce, bore or drill, which in turn derives from thyrel, meaning hole. I actually remember visiting a beach called Thurlestone in Devon as a kid, which has a similar (albeit less impressive) rock arch in the water! So interesting to learn the name would have been derived from the same term!

The Jurassic Coast was designated as England’s first natural World Heritage Site by UNESCO in 2001 and is one of England’s most famous natural wonders.

The main reason to visit is, of course, to see the impressive archway in the water on Durdle Door Beach. However, there’s more to it. As you walk down towards the cliffs, you can choose whether to take the right-hand path to see Durdle Door and its spectacular beach, or the left-hand route to Man’O’War Beach.

Before my trip, I hadn’t heard about this other beach, but wow was it stunning, with it’s beautiful bay and rugged rocks, eroded over the years. I’d also add that with the crowds flocking to see Durdle Door, there’s more chance of having this beach to yourself!

Durdle Door is also the starting point for canyoning and other outdoor activities run by Lulworth Outdoors, and a place to begin several great walks through this pretty region of Dorset.

If you’re wondering what facilities there are here, there are public toilets located in the holiday park car park, plus a small café (although that may not be open all year round).

How to get to Durdle Door

You can reach the area by car, public transport, or as part of a longer walking route. Most people start at Durdle Door Holiday Park, from which it’s a 10-15-minute walk to reach Durdle Door.

Here’s a map to help you plan your trip.

Looking for directions to Durdle Door? I’m here to help!

The easiest way to get to reach the site is by car. If you want to pop it in your satnav then the postcode for Durdle Door public car park is BH20 5PU. This address will take you to Durdle Door Holiday Park, which has a huge pay and display car park.

How to get to Durdle Door by public transport

This is a popular day trip from all over the south of England. When the sun is shining, it’s a wonderful place to visit!

If you’re planning a trip from London to Durdle Door, this is the best route using trains and buses. First catch the train from London Waterloo towards Weymouth, getting off at Wool Station (takes just under two and a half hours).

From there you can hop in a taxi or catch the X54 bus towards Weymouth. It drops you at the entrance to the park. It’s worth noting, there aren’t many of these buses per day (2 or 3 max) so you’ll need to plan your trip carefully. You can check the X54 bus times here.

In terms of weather, the warmest time to visit Durdle Door is in the summer months. Between July and September, the average temperature is 17 Celsius, but can reach highs of 26 Celsius… although if there’s a heatwave across the south of England, temperatures could be even higher! You could even have a swim right by the arch then.

It gets pretty cold in winter, with average temperatures in December January of 5 Celsius. There’s often a bracing wind coming off the sea too, so wrap up warm if you’re planning a winter trip.

I think the best time to visit Durdle Door is in June or September. Temperatures are warm, but it’s out of the school holidays, so crowds are reduced. You’ll also have less trouble sorting accommodation, not to mention the prices will be lower out of peak season. Just remember, this is England – if you’re prepared for the weather (umbrella, warm coat, suncream or whatever you need!) it doesn’t need to get in the way of having a good time!

You can visit the site all year round, but it’s worth being aware that the car park at Durdle Door doesn’t open until 8am each day, and that you can’t park overnight. Gates are locked at 10pm in peak season, 7pm in spring / autumn and 4pm in winter. Obviously if you’re arriving via the cliff paths then there are no restrictions, but if you want to park then you’ll have trouble outside of the car park hours.

There are a few exceptions for photographers wanting to visit early in the morning for a special sunrise experience. You can check out the timings for your visit here.

If you’re visiting Durdle Door for the first time, I’d recommend arriving early (car park opens at 8am) and taking a walk down to the archway. It takes around 10 minutes to reach the viewpoint, and from there you can walk down the steps to the beach too. We arrived just after 8am and only saw a few other people there, but by 9.30am around 30 school kids arrived by coach.

The area is overseen by the Lulworth Estate, so if you want to check anything, I’d advise looking on their website. For example, I noticed you’re not allowed to fly drones at Durdle Door, Lulworth Cove or across anywhere classed as Lulworth Estate.

One of my favourite things about this region of Dorset is how many beautiful walking routes there are. Wander the cliff tops, take in epic panoramic views, and spot hidden bays all while following the epic Jurassic Coast. It’s a region made for landscape lovers and photographers.

One of the top walking routes is from Lulworth Cove (another stunning bay in Dorset), over the cliffs to Durdle Door. The route is around 2.5 miles and takes approximately 2 hours. There are wonderful views along the journey, and it’s an easyish walk for all ages and abilities. You can find a bit more info on it here.

I’d recommend reversing it and starting at Durdle Door in the morning (to hopefully miss any crowds) and then getting to Lulworth Cove for lunch, before walking back again.

Another great walking route in the area is from Lulworth Cove (although you could start the loop at Durdle Door) along this route on the South West Coast Path. It’s over 11 miles, and some is steep, so it’s not for everyone. Along with great views of the coast, you’ll also get to see some historical remains, including a burial mound from between 1500 – 1100 BC.

If you’d like to stay near the site, there are a few options.

Durdle Door Holiday Park – Open March to October, this is the closest option to the landmark itself. There are a range of options available including static caravans, camping pods, cabins and more.

Oh and if you’re wondering about some Durdle Door camping, then that’s also an option! What a dreamy place to wake up. If you’re bringing a tent, you can use the Rookery site at the holiday park, or if you have a vehicle, then you can choose between a seaview or gravel pitch.

Durdle Door camping – Other than the holiday park, there are a few options for camping / caravanning close to the site including Swanny’s Campsite, Little Birch Caravan Site, Galton Campsite and Rosewall Camping.

There are lots of lovely holiday homes, flats and rooms available for people planning a break in the area. They’re a little pricier, and further from the famous landmark, but there are some great options available. So long as you have a car, it’s nice and easy to get around.

Here are a few of my top picks (all sleeping 6 or more) that are within a short drive of Durdle Door.

Amy Cottage – Cosy thatched cottage set back from the village of West Lulworth, sleeping up to 6 people.

This cute pub in the charming village of West Lulworth is moments from the beach, has great views, and is moments from cafes, restaurants and ice cream shops! From here it’s easy to walk the coastal path over to see Durdle Door. What more could you need?

Just a five-minute walk from Lulworth Cove, this chic boutique hotel has 12 rooms and its very own bistro. It’s a great location for a beach holiday, and offers easy access to get to the coast paths too.

Another great option in the cute village of West Lulworth, this country house hotel is a short walk to the shops, pubs and beach. It has its own restaurant and is a great place to stay if you’re planning a romantic break in the area.

A little further away, in the historic market town of Wareham, this is a great option if you want a little more from your hotel. This smart hotel is set in large gardens, with tennis courts, a gym, an indoor and outdoor pool and a spa.

Other things to do near Durdle Door

There are plenty more great things to see and do in this region of Dorset. I had a great road trip in the region in the autumn, and would recommend a quick read of this post for some great tips.

Lulworth Cove – A stunning cove that is almost a perfect circle, best seen from the cliffs on the South West Coast Path.

West Bay – Beautiful beach famous for its huge sandstone cliffs, with 140ft sheer drops to the ground below.

Corfe Castle – Charming village with the ruins of an ancient castle perched on top of the hill. Read more about visiting in my detailed guide. 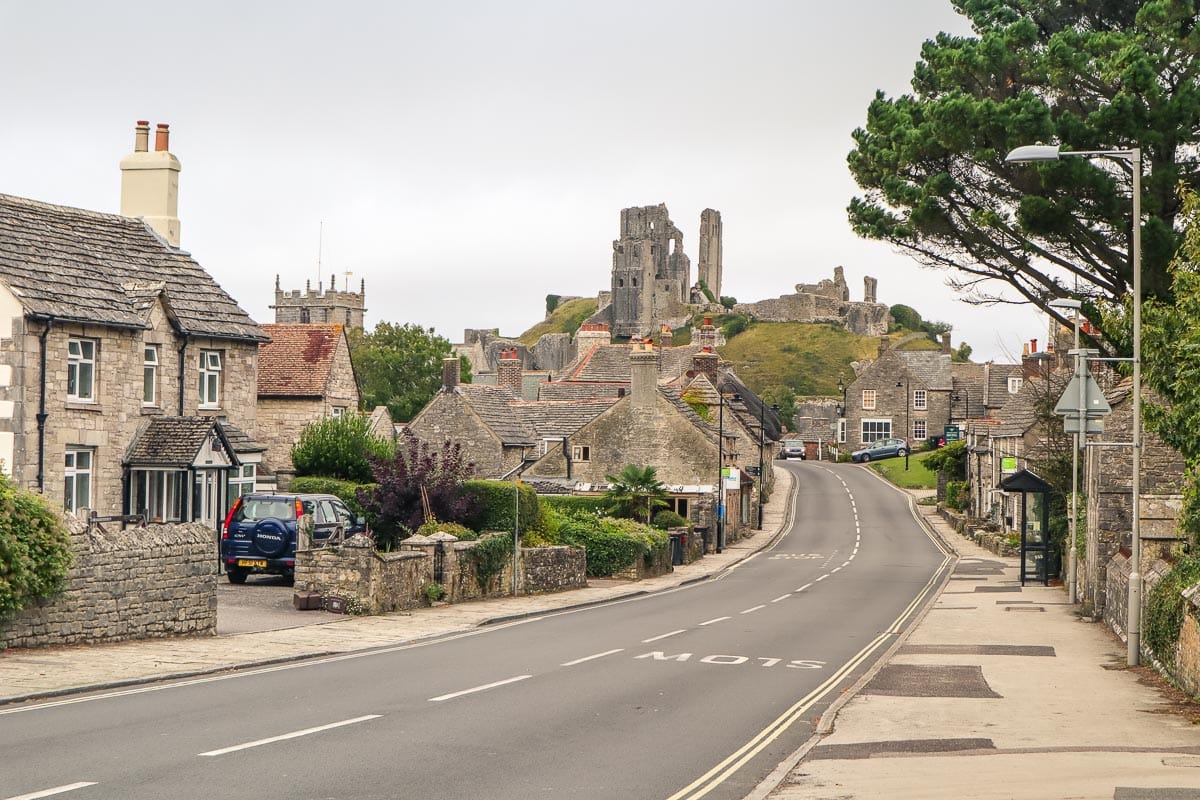 Portland Bill – Classic red and white striped lighthouse on the Isle of Portland.

I hope you’ve found this guide to visiting Durdle Door helpful! Have an amazing trip. Find out more about visiting Dorset and what I got up to on my recent trip here.

Enjoyed this post? Save it for later using one of these pins…

2 thoughts on “A Detailed Guide To Visiting Durdle Door, Dorset”