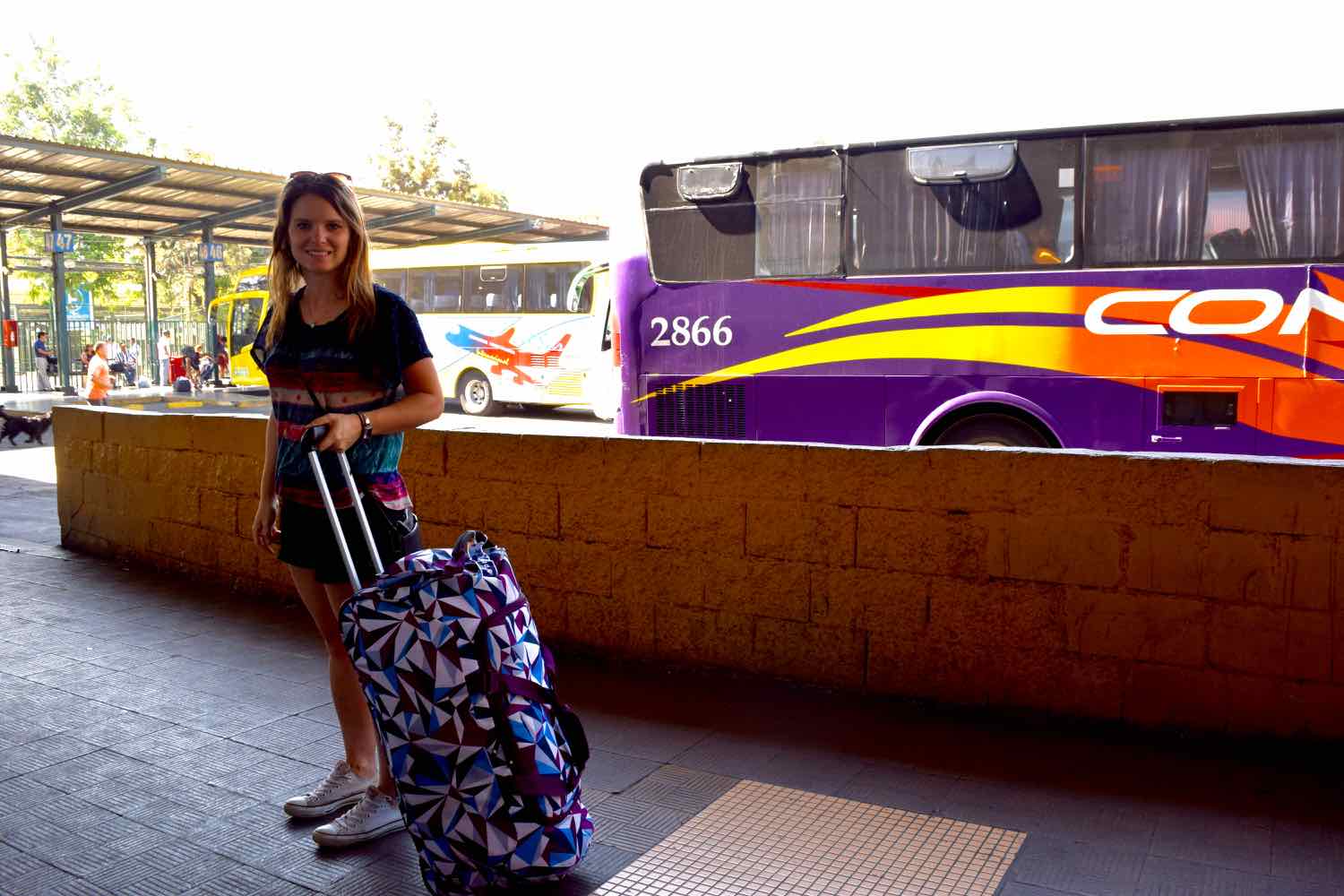 Looking to travel around Chile by bus? Find out all you need to know about buses in Chile in this helpful travel guide.

You’re planning a trip to Chile…? Great! No doubt one of your first thoughts will be “how will I get around?” With a length of over 4000km, it’s a very long and rather thin country, making things a tad awkward.

Rather frustratingly, some of the most beautiful spots are at opposite ends of the country, for example the Atacama Desert and Patagonia.

So, to travel in Chile, you have three main options:

Hire a car in Chile
Pros – Get off the beaten track, Chile’s roads are well signed and drivers seem reasonably sensible compared to their South American neighbours!
Cons – Tiring if you’re covering long distances and may be uncomfortable in a foreign country.

The two main airlines operating in Chile are LAN and Sky Airlines. We flew with Sky from Santiago to Calama (close to the Atacama Desert) for around £130 return. We never received a confirmation email and were concerned the booking hadn’t gone through. Thankfully, it was all fine once we got to the airport!

Travel by bus in Chile
Pros – Great on a budget, good amenities, perfect for long journeys.
Cons – Not always direct to where you need to go, and some of the windy roads will leave even the most seasoned traveller a little queasy.

The bus option is the most cost-effective and provides not only a comfortable way to travel, but it’s also a great way to see the country’s stunning landscapes.

If your grasp of Spanish (like mine) isn’t great, then arriving at a big bus terminal such as Santiago’s central bus station will feel overwhelming. From my experience, here are some tips on what to expect, how buses in chile work, how much a ticket costs, and how not to get caught out!

15 Things To Know About Travelling By Bus in Chile

1. Buses in Chile are generally high quality modes of transport. The main companies you’ll see are Pullman and Turbus but depending on the destination you’ll encounter the likes of JAC, Jet Sur, Nilahue, Cruz Del Sur, Gama Bus and more.

The buses in Chile are what we would describe as coaches in the UK, and many are double decker.

2. Chile’s buses generally run on time! In the four weeks I travelled around the country, the buses either left on time or were only a few minutes late.

3. They’re used to carrying luggage. Most have a limit of 30kg per person but nothing was ever weighed. People put everything from large cool boxes and suitcases to bikes in the hold area.

When you hand your luggage over they put a numbered sticker on it and give you the tag (like a cloakroom ticket). Don’t lose it – you’ll need it to reclaim your luggage when you reach your destination.

4. There isn’t a big organised system. Don’t expect a screen with stand numbers. The general rule is to buy a ticket and hope there is a number on it.

If not (like at smaller terminals) just look for the name of the bus company and show the conductor your ticket. You’ll find out pretty quickly if it’s the right bus for you!

5. Some towns have several bus terminals.

Confusingly, some smaller towns have separate bus stations for Pullman and Turbus, so if you’re trying to line up two buses, you may have to hotfoot it around the block to a different terminal.

6. Santiago is a bit of a minefield with several bus terminals!

The main ones are Terminal Sur and Alameda which are both near the University.

Make sure you know which one you need before you head there, or allow plenty of time to walk between them.

7. Overnight buses are actually pretty good. As Chile is such a long country, many companies run overnight services to cover the large distances between destinations such as Santiago and Atacama, Puerto Varas, Pucon and down to Patagonia.

These are designed for comfort and depending on your budget you can opt for a semi cama (reclinable seat), a salon cama which reclines further and is usually wider, or even a flatbed.

On many you’ll find curtains not only on the window, but also between you and the person next to you, allowing for a bit of privacy as you catch some zzzzzs! From our travels, I’d rate Turbus and Pullman as the best bus companies in Chile.

8. Amenities. All have air conditioning, but be prepared – sometimes they’re freezing, other times they’re boiling. Some have USB sockets to charge electronics and others even have plugs.

The Turbus service I took overnight from Santiago to Puerto Varas had a special wifi connection that allowed you to watch a selection of films on their server for free.

They were even in English with Spanish subtitles – bonus! They have a toilet downstairs and some give you a breakfast bag in the morning containing a cookie and a carton of juice.

9. Shop around. Many terminals have counters for several companies all selling the same routes.

If you have time, patience, and basic Spanish, ask at each counter as prices can vary according to time of day and how many buses they have running.

10. Book longer journeys a few days in advance. While it’s probably not necessary to plan hugely far ahead, with longer journeys (particularly overnight services e.g from Santiago to Mendoza) it’ll be beneficial to book in advance.

These routes tended to be fully booked when they left.

11. Many towns have ticket offices for the major bus companies, making it easy to book ahead and check times in advance.

12. Booking tickets… beware some of the websites are a little tricky and unstable! I tried to book several times with Cruz Del Sur and Pullman with no luck. Websites timed out or didn’t accept my card.

Some asked for a RUT (Chilean tax ID) which foreigners do not have. Recorrido is a site that allows you to compare and book several bus companies.

The only bus I booked online was with Andesmar from Santiago to Mendoza, which worked fine.

13. If you’re travelling from Chile to Argentina by bus, take one leg of the journey during daylight hours. The journey up into the Andes Mountains is one of the most spectacular bus journeys I’ve ever taken!

Sometimes there are lengthy queues at the border so be prepared to wait a while. Also, if returning at night, pack some warm clothes as it gets very cold both on board the bus, and outside when clearing the border.

14. Pick your seat carefully. Even with air conditioning, Chile’s buses can get very warm during the day with the sun beating down. See if you can figure out which side the sun will be on and book a seat on the opposite side.

One of the wonderful things about seeing a new place is the mixture of transport you take to get there. It’s certainly a major part of the adventure!

One last tip – if you’re travelling by bus, I’d recommend picking up some Dramamine for travel sickness. I suffered quite badly due to the windy roads and lengthy journeys, so will always have a pack ready now! Happy travels!