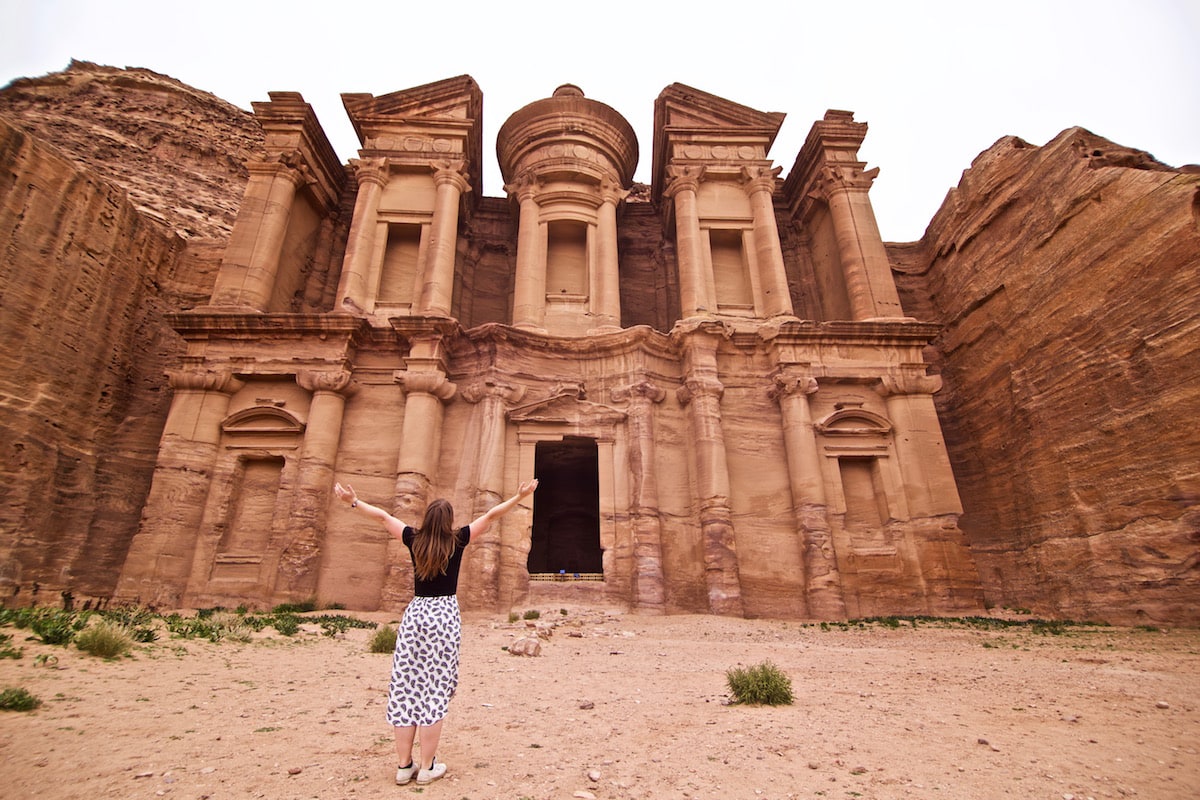 From wonders of the world and royal resting places to tales of crusaders, these fascinating facts about Petra will amaze you.

Deep in the Jordanian desert, the ancient stone city of Petra has a magical quality. Carved out of pink sandstone rock, and hidden for centuries until it was rediscovered by a Swiss explorer, it’s easy to see why travellers are obsessed with this place. Move over Rome, and forget about the Egyptian Pharaohs – Petra’s Nabatean trading empire was the real power in the ancient world!

Petra is an important part of Jordan’s cultural heritage, and features on most travel bucket lists – with good reason! With intricately carved monuments, labyrinthine passageways and a mysterious history, this ancient city remains one of the most beautiful and enigmatic places in the Middle East. It also holds plenty of secrets yet to be discovered, so unleash your inner Indiana Jones and start exploring! Here are some of my favourite fascinating facts about Petra in Jordan.

Petra is one of the oldest cities in the world

Petra was founded in the year 312 BC as the capital of the Nabatean Empire. This makes it over 2300 years old, and one of the oldest cities in the world.

It’s one of the New Seven Wonders of the World

Petra was named as one of the New Seven Wonders of the World in 2007, and fully deserves its place on this prestigious list. It shares the accolade with other breath-taking historical sites such as the Great Wall of China, Machu Picchu, the Taj Mahal, the Colosseum, Chichen Itza, and the statue of Christ the Redeemer in Brazil.

The Petra Archaeological Park is one of five UNESCO World Heritage Sites in Jordan, and the most famous tourist attraction in the country.

Appropriately, for a city hewn from stone, the name Petra actually means ‘rocks’. ­ It is thought to come from the Greek word ‘Petros’, meaning rock, and was named by Greek visitors for its distinctive carved sandstone.

The original inhabitants had a different name for it

According to the ancient historian Josephus, Petra was actually known by a different name among its Nabatean inhabitants. Inscriptions carved into the walls of the city suggest that it was known as Raqemo, after its royal founder.

Petra is a royal resting place

Petra is packed with intricately sculpted tombs, such as the iconic Urn Tomb, many of them carved into the façade of the mountains that overlook the rest of the city. These spectacular monuments are thought to have been the resting place of Nabatean royalty, and were carved between the 1st century BC and the 2nd century AD. They stand as an enduring testimony to the wealth and importance of the royal family and Nabatean elites.

Even the Treasury is a mausoleum

One of the most famous Petra Jordan facts is that the so-called Treasury is actually also a mausoleum! The Treasury, otherwise known as al-Khazneh, is one of the most photographed sites in the whole complex, with magnificent intricate carvings set into a steep rock face.

However, despite the name, this was actually the final resting place of the Nabatean king Aretas IV, who died in the first century AD. It was nicknamed the ‘treasury’ by local Bedouins who believed that it was packed with riches.

Many blockbuster films have been shot in Petra. Filmmakers love its unique and dramatic scenery. Most famously, Petra doubled as the Canyon of the Crescent Moon in Indiana Jones and the Last Crusade, but it’s also been used in The Mummy Returns, and the more recent live-action Disney remake of Aladdin.

Only around 15% of the city has actually been excavated

Petra’s ruins are immense, by any standards, but incredibly, around 85% of the site has yet to be uncovered. There are many more secrets hiding under the ground that may provide clues about Petra’s earliest origins, and the later Greek and Byzantine periods in its history.

Petra is steeped in Biblical legend

Petra’s legendary origins go back a long way, even as far back as Biblical times! The valley in which the city is found is known as Wadi Musa (Moses Valley), because of a legendary connection to the Biblical prophet. It is said that Moses struck the rock at Petra and water miraculously spouted from the ground, providing a drink for the thirsty Israelites.

It was rediscovered by a Swiss traveller in disguise

For many years Petra remained a closely guarded secret, known to local Bedouin communities, but a mystery for European scholars. In 1812, a Swiss traveller and explorer named Johann Ludwig Burckhardt disguised himself as a Bedouin and discovered the site during an expedition in the Transjordan. He identified it as the lost city of Petra, and sparked a flurry of archaeological excavations.

Petra’s beautiful sandstone is an incredible colour, earning it the nickname ‘the Rose City’. One of the most magical times to visit is around sunset when the last rays of the sun cast an incredible pink hue on the rocks.

Petra is (almost) impossible to conquer

Petra’s success as a city may have been down to its incredible natural defences. The site is accessed to the east by a narrow, winding gorge known as al-Siq, stretching for over 1km, which would have made it very difficult for hostile forces to get in without being stopped. This seems to have been the key to its success for so many centuries.

The crusaders had a base at Petra

One of the most surprising facts about Petra in Jordan is that in the Middle Ages, Western crusaders actually had a base on the site. The remains of the 12th-century al-Wu’ayra castle, on a hill overlooking the site, can still be visited today.

Cars are forbidden in Petra

It’s not possible to bring a car, motorbike or any other form of vehicle into Petra, so if you don’t want to get around on your own steam, you’ll need to charter a four legged companion! Donkeys, horse-drawn carriages and camels are all options within the city, although their welfare is sometimes questionable.

Petra may be a formidable fortress city, but its natural defences didn’t stop it from being affected by natural disasters. In 363 AD a devastating earthquake struck the city, destroying an estimated third of the site.

The city aligns with the sun

The ancient Nabateans who created Petra held a particular reverence for the sun, which they viewed as a source of life, light and mystery. As a result, much of Petra’s beautiful architecture is actually aligned with solar patterns, with particular emphasis on the summer and winter solstices.

The descendants of the Nabateans still live in the area

The Nabatean civilisation has long disappeared, leaving behind only faint traces of its memory in the specular monuments of Petra. However, one local Bedouin tribe can trace their origins all the way back to the Nabateans. The B’doul Bedouin tribe and many of its members live and work in the ancient city, acting today as tour guides to pass on the secrets of their clever ancestors to modern visitors.

Petra was once famous for its gardens

Nestled in the dry, dusty Jordanian desert, it’s difficult to imagine Petra as a lush paradise. However, recent excavations have discovered that a complex irrigation system provided water to the city’s thirsty inhabitants, as well as fuelling a spectacular complex of gardens and fountains. These monumental gardens made Petra a true oasis in the desert. The people of the city even had their own swimming pool!

It was the centre of the ancient spice trade

Petra’s rise to prominence in the ancient world was due in part to its important role as a hub on the Middle Eastern spice trade. Incense from Arabia, silks from China, and spices from India all passed through this beautiful rock city on their way to destinations across Africa, the Middle East and Western Europe.

I hope these fascinating facts about Petra have given you plenty of inspiration for your next expedition to the Middle East! A visit to Petra is a once-in-a-lifetime experience, and the sight of this stunning red city will live with you forever.