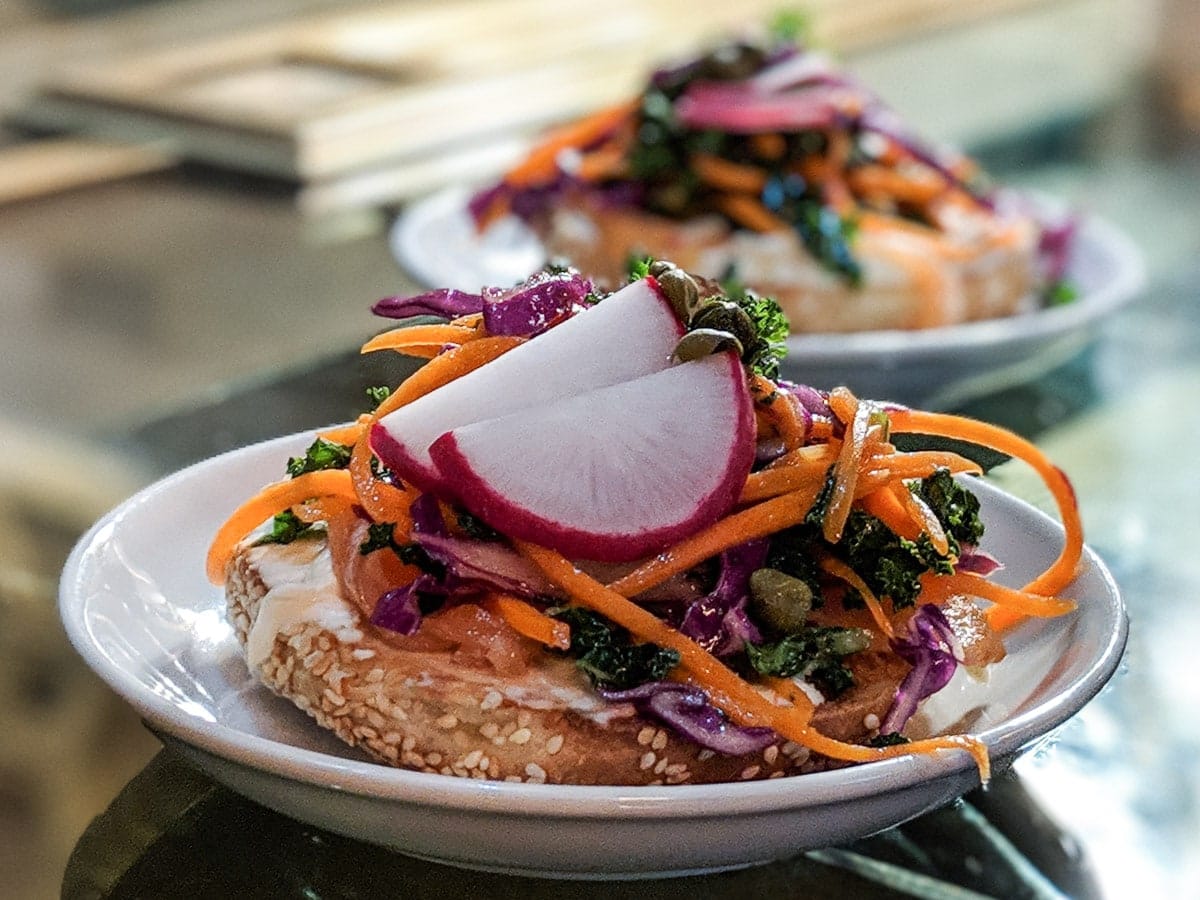 From bagels fresh from the oven, to warming pho and poutine with a twist, find out the best foods to eat in Montreal, and the restaurants to add to your hit list.

Oh look – I’ve been eating my way around another destination. It’s become quite the habit of mine! It’s all in the name of research though, so I can pass on some top tips to you guys, and encourage you to go on your own culinary adventures.

When it comes to food, Montreal has a reputation for being one of the best cities in Canada. There’s the fabulous mix of French and Canadian cuisine, plus plenty of multicultural dynamics, with Vietnamese, Mexican and Middle Eastern restaurants all making their mark. 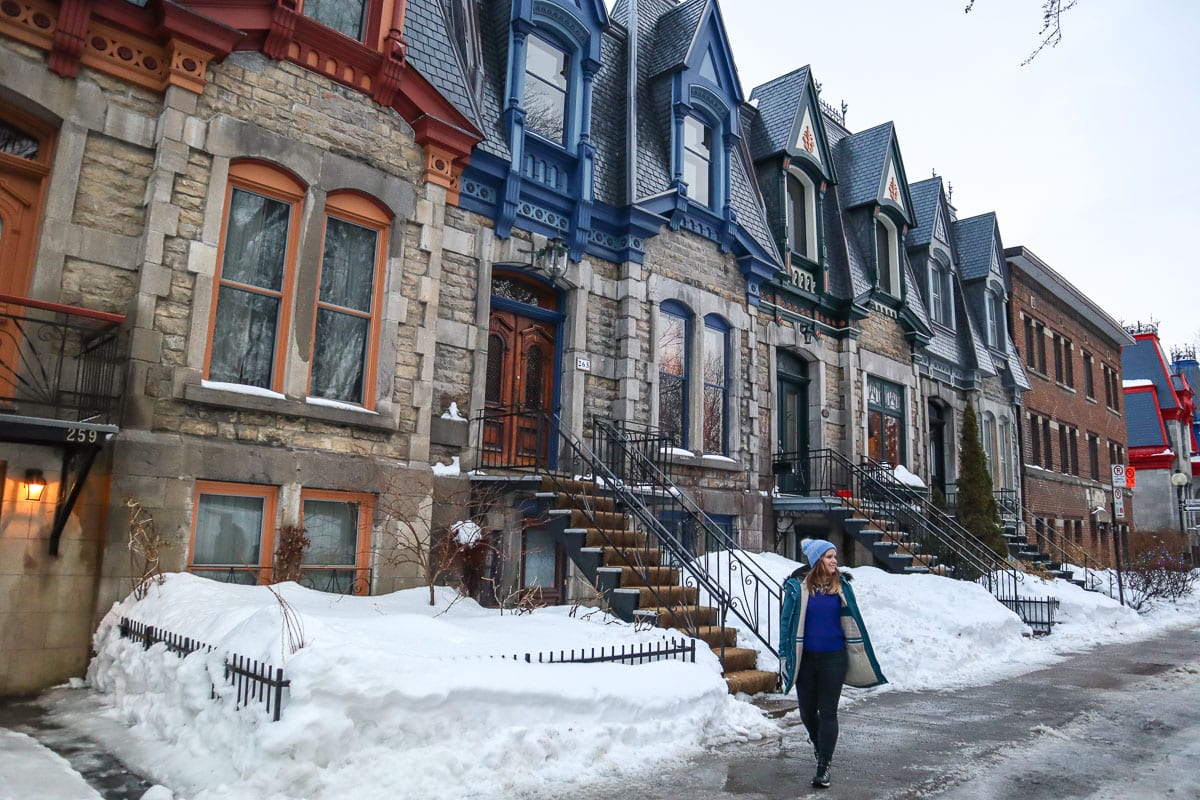 There are stylish Montreal restaurants with Instagrammable décor,  food markets to buy Quebecois ingredients, plus places deserving of several Michelin stars, if the rating system was present in Canada.

Montreal is a city that takes eating out seriously. In fact, after New York, it has more restaurants per capita than any other city in North America. It’s a city I’d 100% recommend you eat your way around, sampling a little bit of everything along your journey. So, take a look at the video, then scroll down to see a few of the best foods to eat in Montreal right now!

The Best Bagels In Montreal – Fairmount Bagel At Crew Collective

Firstly, Crew Collective is an incredible place to stop for a coffee and a bite to eat. Housed in an old bank, you’ll find the counter area located where the tellers once were. The building is full of opulence, with high ceilings and grand staircases. It’s part café / part workspace too (hello dream freelance office!)

Secondly, Crew Collective serves up great coffee and bagels. I went for the Fairmount bagel, which was served with smoked sockeye salmon, cream cheese, capers, pickled shallots and fresh herbs. Photogenic and tasty, Crew Collective was a great place to soak up the relaxed Montreal vibes too.

The Best Pho In Montreal – I Am Pho

There’s a huge Vietnamese population in Montreal. In fact, a lot of the restaurants in Chinatown are actually run by Vietnamese people. It’s a cuisine I absolutely adore. It’s so fresh and flavoursome, with its mix of raw and cooked ingredients, and kicks of chilli and lime.

After a day of snowy adventures on Mount Royal, we headed back to downtown in search of a warming bowl of pho. I Am Pho had excellent reviews, and we couldn’t wait to try it out. After some tasty summer rolls, we both enjoyed a huge bowl of beef pho, which came with all the extras, including lime, beansprouts and fresh lime and basil. It was more than either of us could manage, but it certainly revived us after our busy morning playing in the snow.

A few locals recommended we check out Pullman – a Montreal wine bar, which takes its food just as seriously. It’s a cosy spot, lit by a few flickering candles. There’s an enormous wine list, which at first was overwhelming to flick through, but thankfully the staff were happy to guide us to a bottle that suited our mood and palette.

The food was great too. They serve a menu of small plates, perfect for sharing, with local ingredients like Quebec cheese, and tasty combinations like beets with buttermilk and herbs. Our favourite dishes were the tuna tiradito, venison tartare, and the local cheese board.

Top Tip: If you’d love to try some great wines but often feel restricted by budgets, visit Pullman on a Sunday. The entire wine list is half price, so you can try some bottles that might otherwise have been out of your price range.

Did you even go to Montreal if you didn’t try a smoked meat sandwich?! This is one of the city’s most iconic foods, and one you should definitely try on your first trip to the city. Montreal smoked meat is made from brisket, then layered up and stuffed between two slices of rye bread with a squirt of yellow mustard for extra flavour.

While everyone will tell you to go to Schwartz’s Deli on Saint-Laurent Boulevard (sometimes there’s a queue out of the door!) we’d had it on good authority that the sandwich at Main Deli opposite was better. It’s not a refined or pretty dish, but that meat sure is tasty.

Located close to Place d’Armes, Tiradito is a great spot for times when you fancy a cocktail and a bite to eat in a buzzy environment. It’s a trendy spot, with red neon lights and a young professional clientele.

The passion fruit sour (a twist on the Peruvian pisco sour) was absolutely delicious – sweet, tangy and oh so boozy! Meanwhile, the food was colourful and elegantly presented too. The tuna tiradito was a huge triumph, along with the crab tostadas. I could have happily eaten my way through the entire menu!

The Best Restaurant With A View Of Montreal – Les Enfants Terribles

We visited Les Enfants Terribles on our final evening in Montreal, and it felt like the perfect spot to reflect on our time in the city. They have a few restaurants around the city, but the star of the show is their 44th floor venue in Place Ville Marie. It’s one of the tallest buildings in the city, and THE place to enjoy lunch or dinner with a view of the city.

In London, restaurants with views as good as this one would come with an enormous price tag. However, the food and drinks at Les Enfants Terribles are surprisingly reasonable, for example mains are between £10-£15. Food was good, although I think this is somewhere you come more to enjoy the experience and the twinkly city lights than anything else!

Have you heard of Toque! –  one of the best restaurants in Montreal? Well, Brasserie T is its less formal sister restaurant. The ethos is the same though, so expect great ingredients and chefs who know how to really work some magic in the kitchen.

We enjoyed salmon tartare and steak frites, washed down with some delicious red wine. I thought the steak was excellent; juicy, medium rare as requested and served alongside a mountain of perfectly cooked chips. The restaurant was a nice weekend spot, with the buzz of a Parisian brasserie!

After dinner one night we were looking for somewhere to go for a drink. Someone recommend we check out Bar Furco, a local bar, housed in a former fur factory. Along with all the usual drinks, Furco has an interesting cocktail list, plus craft beers and organic wines.

We visited on a Saturday night, and I couldn’t help but enjoy the eclectic crowd, which included students in their early 20s, couples in their 50s, and a few big groups of girls in their 30s. There was also a DJ spinning some tunes, creating a bit of a party vibe to welcome in the weekend.

READ MORE: Top Things To Do In Montreal In Winter

If you’re vegan or vegetarian, this is one of the best places to eat in Montreal! While most restaurants in Montreal cater for both, LOV was the only place we visited that was dedicated to the cuisine.

We visited the branch in Golden Square Mile, which is beautifully stylish with giant lampshades hanging from the ceiling and plush booths in green and white stripes. The ladies toilets even had a mini urban garden, with a plant growing out of an unused toilet!

The menu at LOV is great fun too, with lots of choice including pasta, tacos, pho, salads, burgers, banh mi and even a vegan poutine. Is it the best poutine in Montreal? Nope, but it’s not far off! Well, when in Quebec…!

We rocked up at Le Poke Bar after an intense travel day. Long haul flight + 5 hour time difference + a packed day in the city… we were tired, had eaten lots of carbs and were craving something healthy and delicious.

We were so happy to stumble upon Le Poke Bar. They have several poke bowls on the menu, or you can build your own (as we did). We enjoyed a salmon, kale, edamame and rice creation, which was super fresh and tasty. It was massive too, so if you’re visiting as a couple, I’d recommend ordering one to share.

This is a tough category to judge based on my experiences in the city, as other than a watery Tim Hortons when we were in a hurry, we had a lot of excellent coffee in Montreal.

My favourites were at Pigeon, L’Editeur and Nous Sommes Café. The latter is run by a lovely guy from South Korea, and located in the colourful Plateau neighbourhood. The coffee was great, décor was simple and the metallic cups were next level cool – just check out those reflections!

After a morning at Bota Bota (Montreal’s spa boat) we were ravenous and in need of big feed! Verses Bistro is a charming spot in Old Montreal, serving up a reasonably priced and varied menu.

The burgers were excellent, stuffed with bacon, brie, pickles and salad. Plus the portion was enormous – I mean, I actually had to admit defeat (which is very rare!)

The Best Restaurants In Montreal… to be continued!

And finally – while I feel like I ate my way around Montreal, there are plenty of restaurants I’d book a flight back to try! It’s a city made for food lovers, so if you get the chance, try these and let me know how they are…

Monarque – Seasonal ingredients, interesting menus and a great space, complete with a view of the kitchen.

Elena – Sleek Italian serving some of the best pizzas in Montreal.

Dinette Triple Crown – Authentic Southern BBQ. They’ll even pack your food into a picnic basket so you can take it to the park!

Macro – One of the best seafood restaurants in Montreal.

Finally, if you want to learn more about the city’s cuisine, I’d recommend taking a Montreal food tour. We really enjoyed the one we did with Local Montreal Food Tours, which introduced us to some great restaurants in Montreal Old Town.

Use this handy map to book your hotel in Montreal


I hope you’ve enjoyed eating your way (virtually) around Montreal with me! Big thanks to Destination Canada, Quebec Original and Tourisme Montreal for inviting us to explore this beautiful city. Lots of great info on their sites if you want to find out more. As always, all opinions are my own. 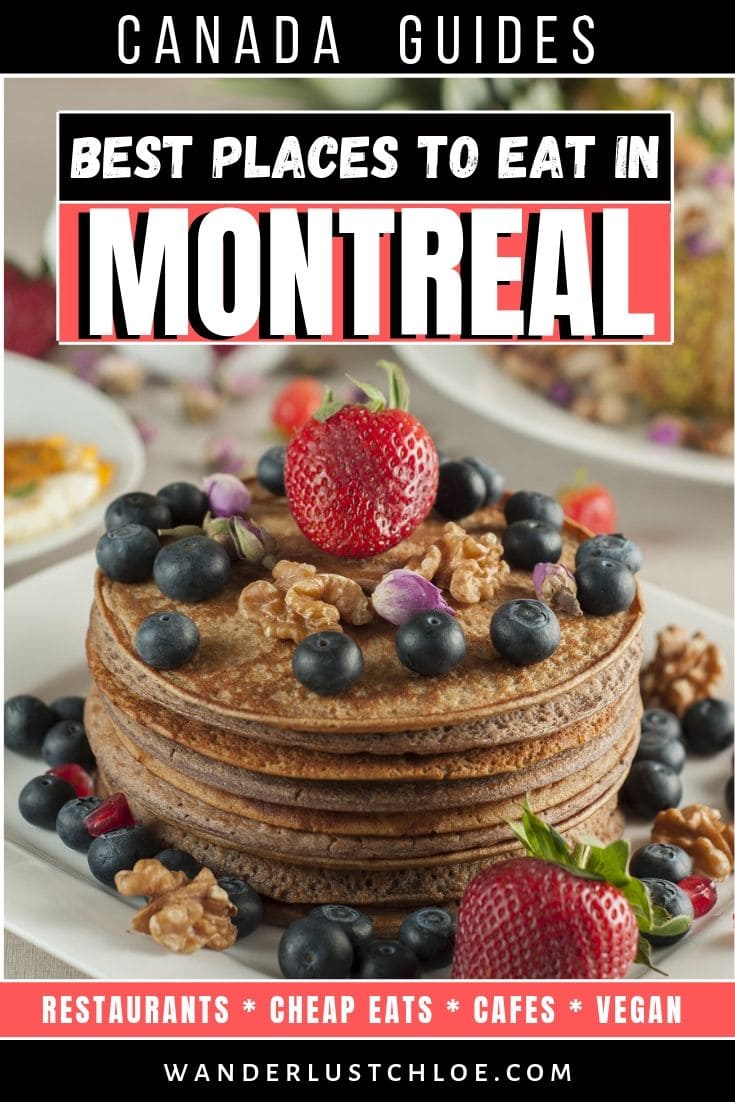