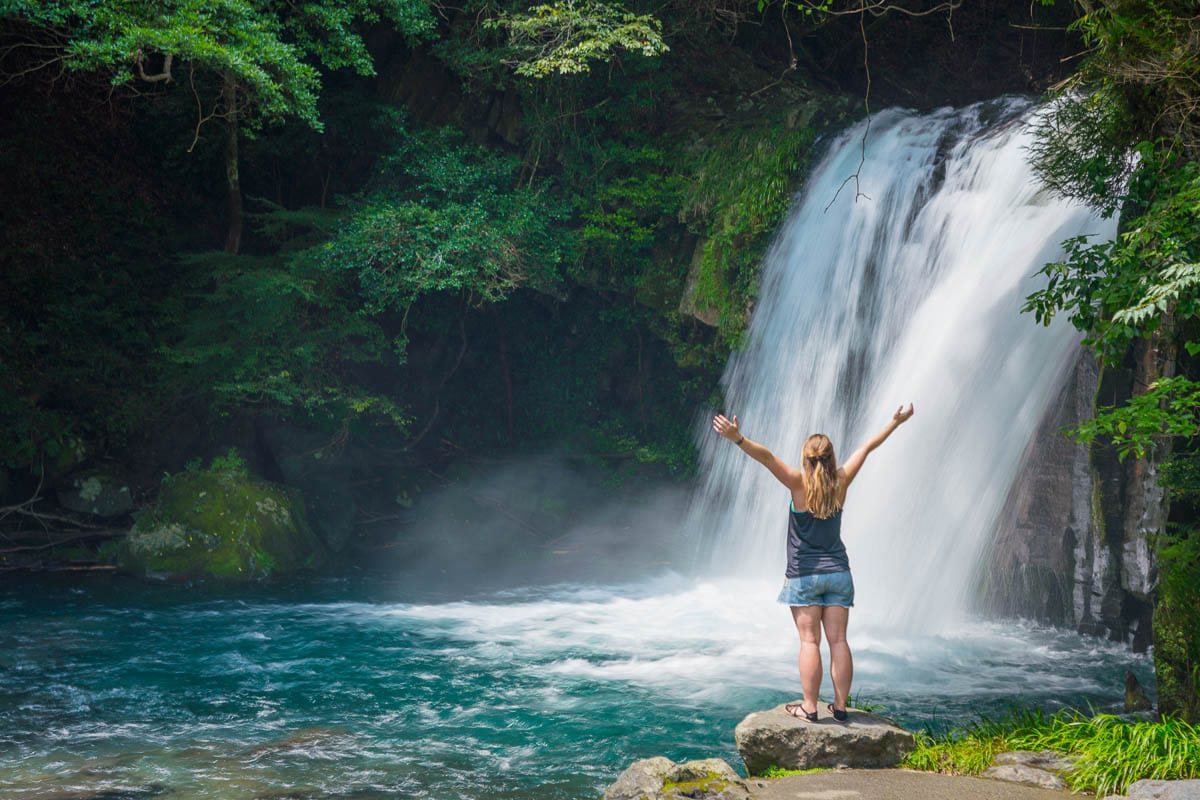 From traditional Shuzenji, to Kawazu waterfalls and the Jogasaki Coast, plan your trip with this travel guide of things to do in the Izu Peninsula, Japan.

After a few days exploring the buzz and excitement of Tokyo, it was time to board a speedy bullet train to reach Japan’s Izu Peninsula. After being surrounded by skyscrapers, I knew this region was going to offer plenty of contrasts.

I really loved getting to know the area, and would recommend spending around 3-4 days in Izu. Short on time? Plan an Izu Peninsula day trip, visiting Kawazu, Shuzenji Onsen or Atami. With limited days, we didn’t make it to the west coast, but there was so much on the east coast and in the centre, I didn’t feel like we missed out too much.

How do you get to the Izu Peninsula in Japan, and where is it?

Japan’s Izu Peninsula is located in Shizuoka Prefecture, around 100km southwest of Tokyo.

I found it really easy to get around Japan using the super-efficient train system. I picked up a 14-day Japan Rail Pass  (46,390 YEN / approx. £325) when I arrived, and found I could use it on the majority of my train journeys.

The train from Tokyo to the Izu Peninsula takes around 50 minutes if you catch the Shinkansen to Atami Station. Alternatively you can head to Mishima Station, then catch a 30-minute train to Shuzenji Station.

READ MORE: Postcards From Japan: Top Things To Do In Tokyo

Why visit the Izu Peninsula in Japan?

Firstly – it’s beautiful! This region is famed for its volcanic origins, which have created a diverse landscape of rugged coasts, picturesque beaches, sea caves, volcanoes and mountains.

We spent a few days in Izu, packing in as much as we could. It’s hard to compare Izu to one other place I’ve been to before. Instead I’d say there are elements of Italy’s stunning Amalfi Coast, Hawaii’s volcanic Big Island, and Mexico’s cave-filled Yucatan Peninsula. The landscape is beautifully rugged and varied.

With volcanic roots come hot springs, which the Japanese utilise in the form of onsen (a Japanese hot spring bath) – a must if you’re staying over.

Hikers and nature lovers will love exploring the landscapes, while culture lovers can get to know Japan through its temples, shrines, onsen and ryokans (traditional Japanese inns).

What’s the best time of year to visit the Izu Peninsula in Japan?

Late March to early April is a popular time, with the beautiful cherry blossom trees in full bloom.

To catch the autumn leaves (a favourite of many locals!) plan your visit for mid-November to the start of December.

In terms of temperatures, you can expect the Izu Peninsula weather to reach lows of 5 degrees in winter, and 30+ degrees in summer.

We visited in late August. Not only was this during typhoon season (we experienced one in Osaka later in our Japan trip) but it was also very hot (28-32 degrees+) with 75%+ humidity. If you’re planning a lot of outdoor activities, you might prefer to visit at a cooler time of year.

What’s the best way to travel around the Izu Peninsula in Japan?

As mentioned, the Japanese rail network is excellent. It’s beautifully efficient and pretty easy to navigate, even with zero Japanese to help.

We caught trains between multiple destinations including Atami, Shuzenji (for Shuzenji Onsen), Mishima and Jogasaki-Kogen (for the Jogasaki Coast). You can find out more about travelling on the Izukyu Line here. You’ll have to pay a supplement from the Japan Rail Pass for some routes.

There are plenty of buses too, but I found them a little bit more complicated without much Japanese!

What are the top things to do in the Izu Peninsula in Japan?

This was the highlight of the Izu Peninsula for me. Kawazu Nanadaru is a series of seven waterfalls along a serene river trail. The waterfalls are of varying shapes and sizes, and the entire hike takes around two hours.

At the end of the trail is Nanadaru Onsen Resort, where you can relax in several thermal pools, with an incredible view of the largest waterfall.

One of the region’s most famous hot springs towns, Shuzenji is a beautiful and traditional place with temples, a beautiful bamboo forest and a river running through the middle.

If you get the chance, I’d recommend staying at Arai Ryokan for a truly authentic Japanese experience. The onsen there are lovely, the service is warm and friendly, plus they serve you an authentic Japanese feast in your bedroom.

While staying there, I hired a kimono for the afternoon. It was an amazing experience exploring the bamboo forest in traditional dress.

Marvel At Atami – The Amalfi Coast Of Japan

Compared to many of the peaceful towns in Izu, Atami is a buzzy place! However, head out of the main city and around the coast a little and you’ll be amazed at what you see.

Vast sweeping cliff faces, towns built on the edge of rugged rocks and more, it reminded me of Italy’s Amalfi Coast. I was only there for one evening, but wished I’d had longer to explore.

Catch The Cable Car Up To The Top Of Mount Omuru

At this point I have to improvise a little… when I saw photos of extinct volcano Mount Omuru, I thought it looked totally epic. It’s 580m high with a 300m wide crater, and totally covered in grass.

However on the day we visited, the weather had other ideas. Shrouded in mist, we could barely see 5 metres in front of our faces!

On a clear day, the views look totally amazing (judging by the photos I’ve seen!) and you can see all the way to Mount Fuji. Catch the cable car up, and then spend 30 minutes walking around the perimeter of the top.

On the southern tip of the Izu Peninsula, this sea cave (also known as the dragon cave) hides a mysterious secret.

While you can wander the cave beach at low tide, the prime viewing point is from the rocky path above.

From there you’ll spot the undeniable outline of a heart.

Also, just next to it is a lovely patch of beach with sand dunes where you can go sand boarding.

Of all the Izu Peninsula beaches, this is one of the best. In fact it’s frequently regarded as one of Japan’s best beaches, at 800m long, with soft white sand and clear blue waters.

It’s popular with swimmers and surfers, and has a red shinto shrine perched on a rock at one end.

You can’t visit the Izu Peninsula and not sample the most famous local ingredient, Wasabi. Requiring the cleanest water (hello Mount Fuji) and perfect growing conditions, Japanese horseradish is extremely difficult to grow.

It was on the menu at every restaurant we visited, most notably in the dish ‘wasabi don’ – a dish of rice, bonito flakes and wasabi. Prepare for a workout though, most likely they’ll bring you the entire root and a grater!

After learning that a lot of the wasabi we eat in England is just horseradish injected with green food colouring and chemicals, it was amazing to try the real deal.

Adventure Along The Jokasaki Coast

Jagged cliffs and unusual rock formations make this a surprising hiking route! Just look at it… It reminded me a little of my time in Hawaii, when I wandered the lava fields on The Big Island.

Cross the Jogasaki Suspension Bridge, visit the lighthouse and marvel at the fact this landscape was created long ago after the eruption of Amagi Volcano.

Travel On The Shimoda Ropeway

This cable car takes you to the top of Mount Nesugata, and offers spectacular views over the coast.

There are also luscious gardens with exotic flowers waiting at the top, plus a temple.

Where to stay in Izu Peninsula in Japan

I stayed at a mix of hotels, B&Bs and traditional ryokans across my trip. If you’re visiting the Izu Peninsula for a few days, I’d recommend staying at a ryokan for at least one night. These traditional Japanese inns aren’t like anywhere I’ve stayed before.

They offer an authentic Japanese dinner and breakfast as part of the package and most have their own hot springs public baths (onsen).

Clothing isn’t usually permitted in an onsen, but don’t let that put you off, it’s an amazing experience and bathing in the soothing warm waters is the best way to unwind after a day of sightseeing.

What a beautiful ryokan this is, with its garden and fish pond, and views over the river. Staying here at the start of our trip offered a chance to get a real flavour of Japan.

A dinner of several courses featuring lots of tiny dishes (mostly seafood, fish and pickled vegetables) was served in our room, before our futon was laid out. We also spent our time wearing yukatas (a cotton kimono) and visited one of the best Izu Peninsula onsen!

This hotel is in the perfect location for exploring Shuzenji Onsen on foot, seeing the temples, bamboo forest and river.

You can’t get any closer to the beach than this! Moments from the sands of Shirahama Beach, this hotel has a resort feel, with outdoor swimming pool, two restaurants, shop and public baths.

There’s a choice of Western style rooms (beds) or Japanese style rooms (futons) so pick what you fancy when you book.

If you’re want to see the Japanese Amalfi Coast views I mentioned, this is the ideal place to stay. This hotel was comfortable, with stunning views and a really wonderful public bath overlooking the ocean.

Atami Castle sits directly above, and it’s only ten minutes from Atami Station, and there’s a free shuttle bus to make getting there nice and easy.

I hope you’ve enjoyed hearing all about my time in the Izu Peninsula. I think you’ll agree it’s an area that offers SO much!

For more information on travelling around this region in Japan visitexploreshizuoka.com, or head to www.enjoymyjapan.jp to build your own personalised Japan itinerary. As always all thoughts and opinions are my own! 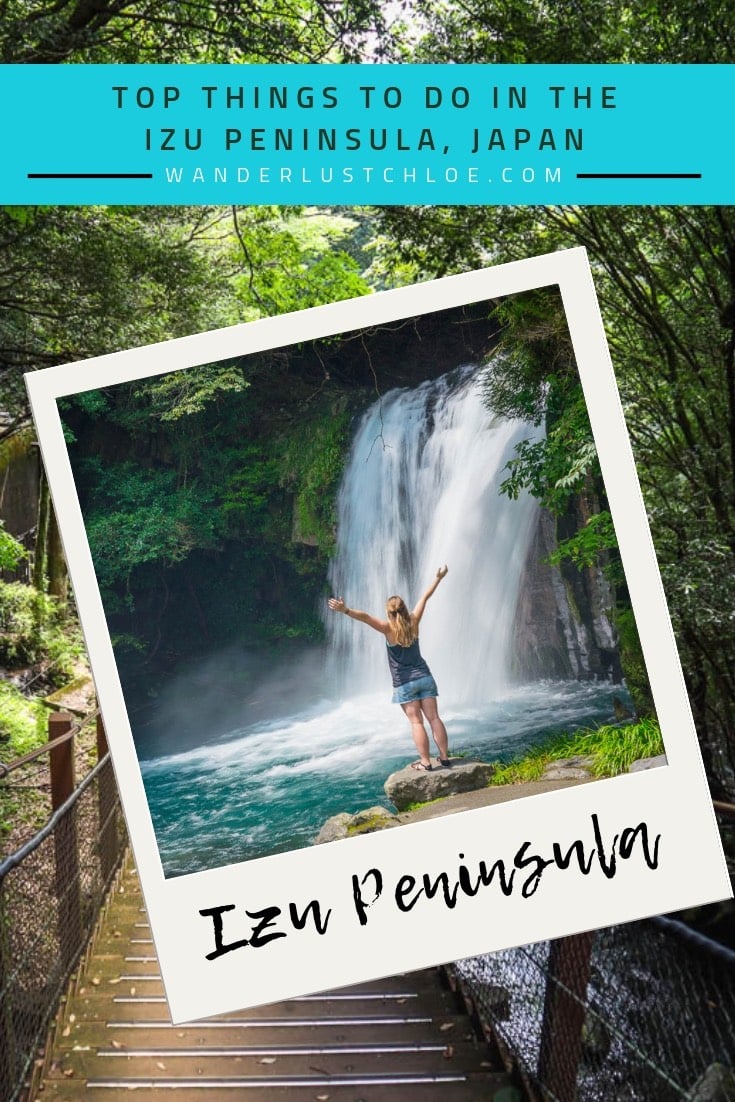 9 thoughts on “Postcards From Japan – The Izu Peninsula: Top Things To Do”