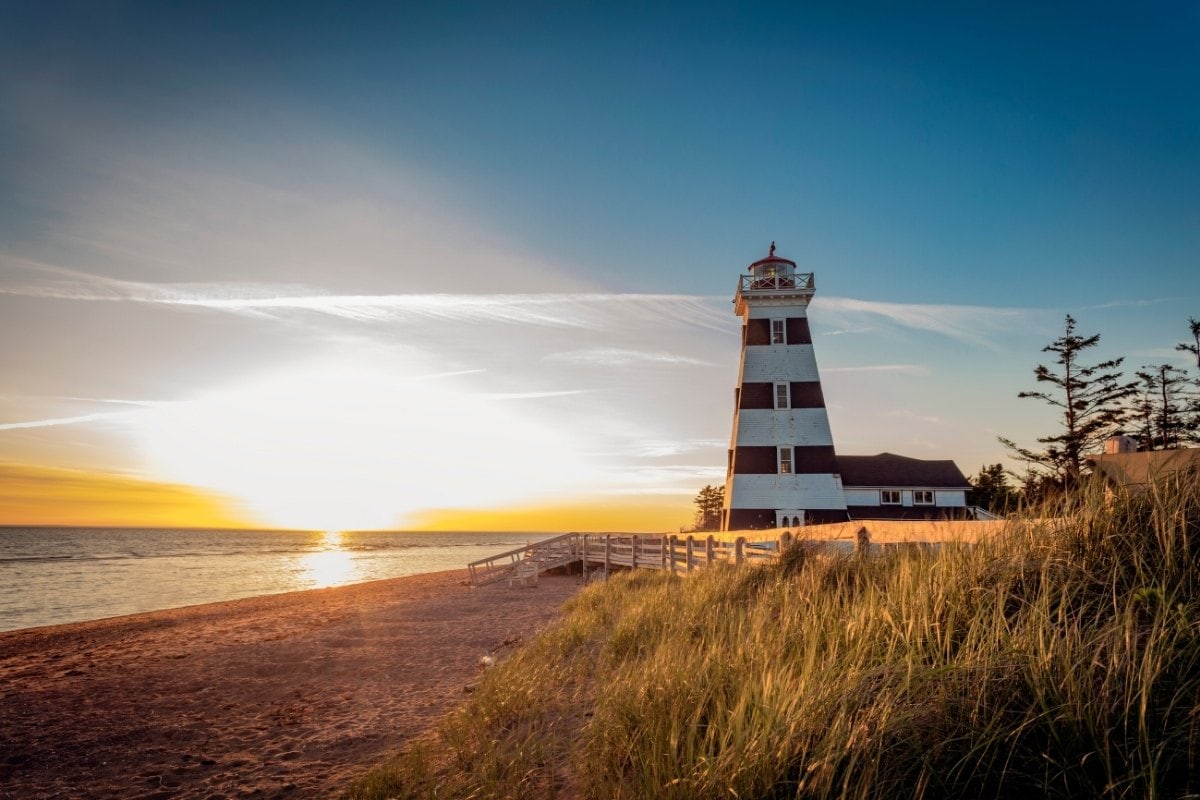 Looking for somewhere that oozes natural beauty, culture and a great food scene? It’s time to reveal some of the amazing places to visit in Prince Edward Island, Canada’s smallest province.

I’ve always loved the power of travel photography. You see an image and you instantly start Googling where it is, how to get there and what there is to do. There’s somewhere I’ve had my eye on for a while now and that’s the Atlantic coast of Canada, in particular Prince Edward Island. It looks absolutely incredible!

I went a bit further than simply looking at photos, in fact I’ve come up with a bucket list of places to visit in Prince Edward Island. I’d love to explore the spectacular red clifftops, run down the sand dunes, visit the buzzy capital of Charlottetown and of course EAT. Being on an island means I’ll be able to feast on the freshest fish and seafood, including lobster and oysters. WOW!

So, if you’re looking for some travel inspiration and fancy a trip to Canada, listen up! Here are a few amazing places in Prince Edward Island that I’m definitely adding to my bucket list.

Where is Prince Edward Island?

If you’re not familiar with where Prince Edward Island is located, here’s a quick geography lesson. The small island sits inside the Gulf of St. Lawrence, off the eastern coast of Canada, a few miles from New Brunswick and Nova Scotia.

How to get to Prince Edward Island from the UK

The Atlantic Canada region as a whole is great for UK visitors as it’s so quick to reach by air. Can you believe it’s only 5 hours by air to Newfoundland and Labrador, and 6 hours to Halifax?

There are some handy routes from mainland Canada too. You can drive to the island from New Brunswick, crossing the spectacular Confederation Bridge. Alternatively, there are ferries from Nova Scotia to Wood Islands on the south of PEI. Yes, I’ve got to know it so well now, that I’m calling it PEI, just like the locals do!

I’d recommend planning a trip for the summer months. From June to September you can expect lovely, warm temperatures, between 20-28°C – perfect for outdoor adventures. There are plenty of daylight hours, plus lovely warm sunshine to really make the most of all that the island has to offer.

As with much of Canada, the winters are chilly, with temperatures dropping below freezing between December and February. Being an island, watch out for the wind too!

So, with logistics out of the way, let’s get into full wanderlust mode. Don’t blame me if after reading about these beautiful spots you start your very own Prince Edward Island bucket list!

Prince Edward Island has some pretty dramatic landscapes to explore. The ones that have caught my attention most are the island’s striking red clifftops and beaches. Look at these colours!

The deep red sandstone forms the island’s bedrock, and over time has eroded to leave spectacular beaches, colourful soil and several iconic red sandstone cliffs. While you’ll see the beauty of the stone all over the island, I’ve got big plans to explore it from a different angle – from the water!

I’d love to take a trip to Cavendish in Prince Edward Island National Park and kayak or paddleboard along the edge of the cliffs, taking in the natural beauty from the water. I’ve heard Cape Turner and Orby Head offer some of the most striking views.  Alternatively, Thunder Cove near Darnley has some amazing rock formations to take in too.

Charlottetown is PEI’s buzzy capital, where you’ll find important cultural buildings such as the Confederation Centre of the Arts, government offices and a variety of shops and restaurants on tree-lined Victoria Row.

One of the big reasons to visit Charlottetown? For the food! Prince Edward Island has the nickname ‘Canada’s food island’ and is synonymous with a few delicacies – oysters, potatoes and ice cream! The city is home to plenty of great restaurants, including Claddagh Oyster House, Sims Corner Steakhouse & Oyster Bar and Merchantman Fresh Seafood & Oyster Bar.

Oh, so you may have noticed a theme there!

PEI is the leading oyster producing province in Canada, with Raspberry Point and Malpeque oysters being the most famous varieties. You’ll see them on menus around the world, from North America to Europe and Asia.

As a self-declared carboholic, I was happy to learn that the island is famed for its potatoes too. Potato farming has been one of the island’s top industries since the 1700s, with the iron rich soil perfect for growing spuds. As you drive around you’ll see farms dotted all over… and plenty of truly carbtastic options on the menus across Charlottetown too.

And for dessert? I’d head straight to Cows – PEI’s most popular ice cream brand. There are several branches across the island (as well as in a few other Canadian provinces) including 3 stores in Charlottetown itself.

The high-quality ice cream is made using traditional techniques, with lots of ingredients grown on the island, including fresh berries. Plus, just reading the menu will put a smile on your face, with puntastic cow-themed names like Wowie Cowie, Moo York Cheesecake and Fluff ‘N Udder!

If you’re a total foodie, I’d recommend timing your trip to PEI for September to enjoy Fall Flavours, PEI’s annual food festival, with events held across the island.

Many of us grew up with Lucy Maud Montgomery’s classic novel, Anne of Green Gables. The story is about an orphan girl with bright red hair, who is sent to the house of two aging siblings to work on their farm. They were expecting a boy, but decide to give her a chance. It’s a heart-warming and moving tale, and yes, it’s set in Prince Edward Island, where the author lived.

While you’ll see inspiration for the book all over PEI, definitely pay a visit to Green Gables Heritage Place in Cavendish. There’s plenty to explore including a new visitor centre, museum, the original house, 19th century gardens, farmyard, walking trails (which you might be familiar with if you’ve read the book) and a café.

Accompanying PEI’s rugged coastline are 63 spectacular lighthouses, helping ships navigate the Gulf of St. Lawrence and the Northumberland Strait. Most are in a classic architectural style, painted white and red. While you could spend several days visiting all 63, you’ll soon discover that not all are in use today, and some are even privately owned.

On the last count 35 were still in use, and 7 have been specifically designated as historic sites. The one that caught my attention and is top of my bucket list for when I visit the island is West Point Lighthouse. This black and white striped lighthouse is one of the icons of Prince Edward Island.

It’s the tallest standing today, and has a fascinating maritime history, dating back to 1875. I’d love to wander the soft sand of Cedar Dunes Provincial Park with West Point as its backdrop, then visit the museum inside the lighthouse to learn all about its past.

But then, and this is where the experience gets even more unique… I’d love to check in and stay overnight inside the lighthouse! The Keeper’s Quarters and The Tower Room are located on the second floor of the lighthouse itself. I’m already dreaming about the magical experience of falling asleep to the sound of the waves.

How about heading to the north-western tip of PEI and taking a drive through adorable fishing villages, passing impressive red cliffs at Kildare Capes and even seeing the point where the Gulf of St. Lawrence meets the Northumberland Strait – a part of the longest natural rock reef in North America.

The North Cape Coastal Drive stretches for a whopping 350km, so it might be better to choose a few highlights along the route rather than try to do the entire thing. There are plenty to pick from!

For example, head to the Tyne Valley for the freshest best Malpeque oysters, stop by the magical village made from glass bottles in Cape Egmont or walk under the giant wind turbines on the Black Marsh Nature Trail.

Listen to the sand at Basin Head Provincial Park

Looking for unique things to do in PEI? Well, there’s sand on Prince Edward Island that ‘sings’! Head to Basin Head Provincial Park on the east of the island and you can hear the singing sand for yourself.

The pure white sands are a geographic phenomenon. The sand contains a high silica content that squeaks when walked on. I can’t wait to hear this for myself! The beach looks beautiful there too, perfect for a day trip in the summer.

I can’t wait to make my Prince Edward Island dreams a reality. For now though, I’ll slurp my last few Raspberry Point Oysters and gaze in awe at photos of the red cliffs.

A big thanks to Atlantic Canada for commissioning this content. You can find out more about visiting Prince Edward Island here.