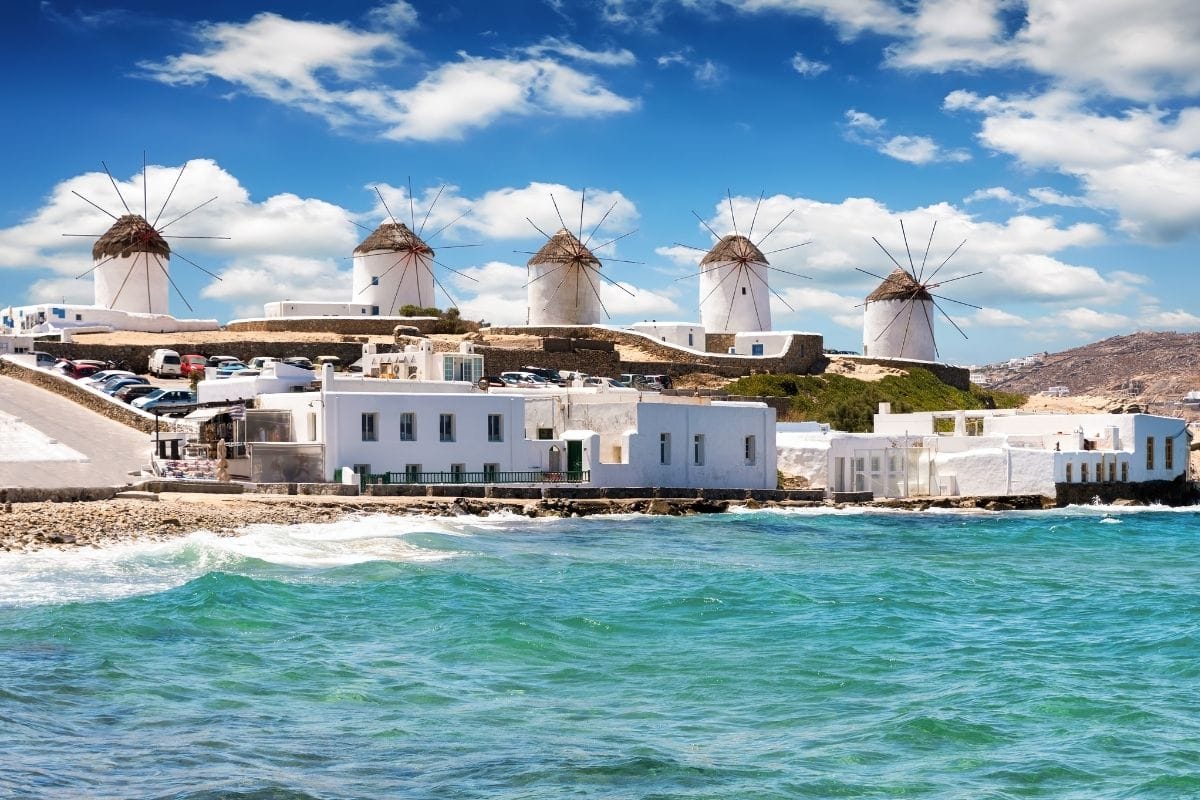 Find out how to get to Mykonos by plane, ferry and car and tips to plan your dream trip to the beautiful Greek island.

With shimmering turquoise waters, golden beaches, and perfect sunsets, it’s easy to see why Mykonos is a dream holiday destination. Thousands visit each year to see the famous windmills, explore whitewashed villages and stay in some of the top Mykonos hotels. Infinity pools stretch out towards the ocean, while pretty terraces provide the perfect spots for gourmet dinners and cocktails under the stars.

This lively island might be known as the wild child of the Cyclades, but it’s also the perfect spot for some real rest and relaxation. It’s one of the best Greek islands for couples, as there are so many romantic spots to visit. You could lie back on a sun lounger taking in the scenery and catching some rays, or dance until dawn at one of the legendary bars. It’s fair to say Mykonos has something for everyone!

To make the most of your trip, you’ll want to be sure that everything runs smoothly, from the moment you leave your front door to your arrival on the island. This guide will tell you everything you need to know about how to get to Mykonos. Yep, I’ve done the hard work so you don’t have to!

Read on to find out all of our top tips on how to get to Mykonos.

How To Get To Mykonos

How To Get To Mykonos By Plane

The easiest and most popular way to get to Mykonos is by plane. Athens International Airport connects to major cities all over the world, so wherever you are, you shouldn’t have too much difficulty in finding a flight to get you to the Greek capital. Several local operators, including Aegean Airlines, run flights between Athens and Mykonos, and this is by far the fastest way to get to the island. Several flights depart Athens per day in peak season, and the journey takes just 35 minutes.

If you’re wondering how to get to Mykonos from the UK, you can actually fly directly to the island. Mykonos International Airport is connected to a number of UK airports, including Heathrow, Gatwick, Luton and Manchester, as well as other major European cities like Paris, Rome, Amsterdam and Madrid.  During the summer holiday season (May – October) airlines including British Airways and EasyJet offer between three and six direct flights per week, so you shouldn’t have trouble finding a convenient time to make your departure.

How To Get To Mykonos By Ferry

Worried about your carbon footprint? If you don’t want to fly, it’s also possible to get to Mykonos by ferry from Athens, Santorini, and a few other destinations around the Greek islands and mainland. A number of ferry companies service the route between Athens and Mykonos, but the best options for both price and convenience are Blue Star Ferries and Golden Star Ferries.

There are two major ports in Athens where you can hop on a passenger ferry that will take you to Mykonos: Piraeus port and Rafina port. Rafina ferry port is much closer to the airport, so might be more convenient if you want to head straight to the island as soon as you touch down.

Blue Star ferries run daily from Piraeus and Rafina, and leave first thing in the morning, usually around 7.30am. The trip from Piraeus takes around five hours, with stops in Syros and Tinos. The route from Rafina (served by both companies) runs twice daily in peak season (early morning and early evening) and is a lot quicker, with a journey time of three hours.

If you’re looking for the fastest way to get to Mykonos, check out the fast catamarans run by Seajets. The Seajet ferry trip is more expensive, but the journey from Piraeus to Mykonos takes only two and a half hours, meaning you can land in Athens at dawn and enjoy brunch on the beach on Mykonos just a few hours later!

If you’re planning a tour of the Cyclades (perhaps following my 7-day Greece itinerary), you might be trying to figure out how to get to Mykonos from Santorini. Thankfully, it’s simple. There are several ferries that leave Santorini each day in peak season, and the trip to Mykonos only takes two and a half hours. The excellent ferry network makes island hopping in the Cyclades incredibly easy!

Things To Remember When Travelling By Ferry

If you’re travelling to Mykonos by ferry, I’d recommend checking the latest departure times when you book as well as just before you travel. These timetables are often subject to change. In winter, there are typically fewer crossings so you’ll have less flexibility, plus adverse weather may disrupt your journey. It’s definitely worth building in some leeway in your itinerary. Always book your ferry tickets in advance to avoid disappointment in peak season!

How To Get To Mykonos By Car

If you’ve got time to spare, and want to make it all the way to Mykonos on your own set of wheels, you’re in luck! Many of the ferry operators run car ferries from Piraeus, including Hellenic Seaways, which offers a daily car ferry service throughout the year. This can be an excellent option, as you’ll then have your own transport ready for sightseeing on the island.

How To Get Around Mykonos

If you don’t have your own car, it’s cheap and easy to rent a hire car once you arrive in Mykonos town, just a few miles from Mykonos airport (most hotels offer airport transfers). This can be a good option if you plan to do lots of sightseeing, and will allow you to get away from the crowds in peak season and find quieter, more secluded spots on the island. However, you really don’t need to have a car to enjoy everything that Mykonos has to offer – the island has an excellent bus service that connects the majors villages and beaches.

I hope this travel guide helps you plan the perfect trip to Mykonos! Now you’ve got the transport sorted, you can start dreaming of all the fantastic things to do in Mykonos during your trip, as well as planning where to stay with my guide to the best luxury hotels on the island.