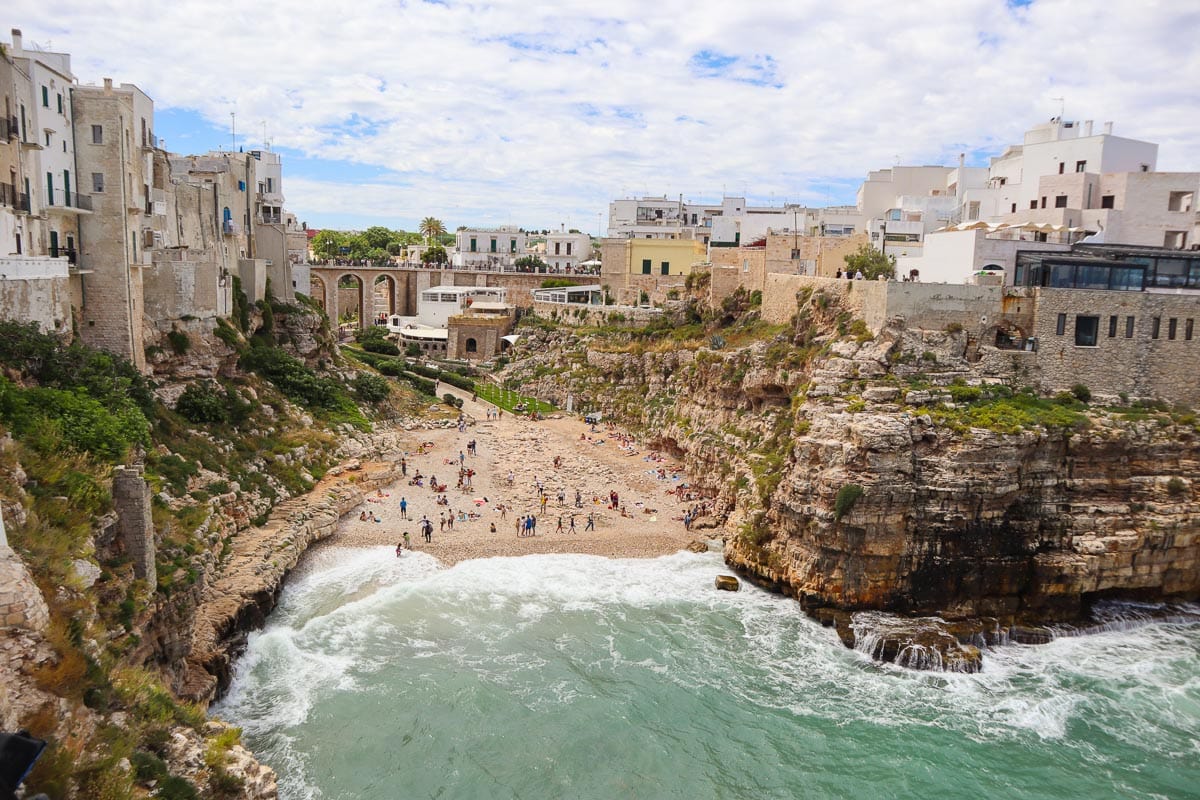 From the vibrant city of Naples and the awe inspiring views of the Amalfi Coast, to the traditional Italian towns of Puglia and Sicily’s beaches, volcanoes and cuisine, it’s time to plan the ultimate southern Italy road trip!

When it comes to road trips, a journey through southern Italy offers a chance to see a combination of spectacular scenery, traditional towns and epic natural wonders. One minute you’re exploring the ancient ruins of Pompeii, the next you’re driving along the heart-stopping roads of the Amalfi Coast.

You could spend a few days exploring Puglia’s prettiest towns including Monopoli and Ostuni, before spending the rest of the week enjoying the crystal waters in Sicily.

There’s a variety of cuisines to sample too, with incredible pizza in Naples, seafood pasta in Puglia, tasty olive oil and Sicilian delicacies including arrancini and sweet cannolis.

Oh and you’ve got a mix of activities on offer too. Hike active volcano Stromboli in Sicily, take a boat trip to the glamorous island of Capri, stay in a traditional Trulli house in Alberobello or go on a pizza tour of Naples (it’s a hard life!)

And the best part about a southern Italy road trip? The fact you don’t have stick to a set route. While you could follow my southern Italy itinerary on the map below, I’d encourage you to read my travel tips and then add a few stops of your own. It’s a beautiful part of the country – you could find yourself passing fields of olive trees or winding along dramatic cliff roads. You never know what you’ll find!

This southern Italy road trip starts in Naples and ends in Sicily – both of which have plenty of flight options available.

From eating pizza in Naples, to feeling like a movie star as you drive the Amalfi Coast, and then onto some of the prettiest towns in Italy as you explore Puglia, before finishing your enjoying Sicily’s dramatic landscapes, this route has it all!

It’s also an easy one to break up – you could just concentrate on Naples and Amalfi, or spend a week exploring Puglia. These are some of my favourite parts of Italy, so I’m excited to share why they should be on your Italy road trip itinerary. I’d recommend a minimum of one week in southern Italy, but if you want to cram in everything on this blog, I’d suggest two to three weeks.

I’d also recommend taking a look at my guide to the best hidden gems in Italy too – you might find a few other stops to add to your route!

I’ve used a map to plot the perfect route for your Southern Italy road trip. I recommend opening it another window to study in detail!

Once you’ve exhausted northern Italy, it’s time to head south on your Italy road trip. The unspoilt shores of the southern coastline will appeal to travellers who like to explore off the beaten track.

First up, the bustling streets of Naples. Set on the Mediterranean coastline with active volcano Mount Vesuvius as its backdrop, this exciting city is the birthplace of Italian pizza, mysterious underground catacombs, castles and lively main squares.

If you choose to stay in Naples for a few nights, you could take day trips to the Amalfi Coast, hop on a boat to the island of Capri or tour Pompeii’s archaeological sites.

If your idea of the perfect Italy road trip is immersing yourself in glitz and glamour of old-time Italy, the Amalfi Coast is for you. With cliffside villages, colourful buildings and secluded beaches which lead to the sparkling Tyrrhenian Sea, it’s one of the most beautiful places I’ve visited in Italy. It’s also known for being one of the best Italian road trips.

Brace yourself if you’re the designated driver! The coastal road is winding and not for the faint hearted, but the views are worth it. Don’t miss the picturesque villages of Praiano, Ravello and Positano – a classic holiday resort with an old-world grandeur and panoramic views along the coast.

If you plan to stay a few nights, Sorrento is a good choice. With museums, piazzas, shopping and reasonably priced accommodation on offer, it’s a great base from which to explore the towns along the coast and visit the island of Capri.

I did some of this road trip in reverse last summer and ended in Amalfi Coast before driving to Naples and fly home. We booked a last minute night at one of the hotels in Vietri Sul Mare, a town close to Salerno, right at the start of the coast. It was a basic hotel, but I still dream about the views regularly – looking out over that incredible blue water and the beautiful town and beach. I’d go back in a heartbeat!

Puglia is where we chose to go on our main holiday last year. Similar to this southern Italy travel itinerary, we hired a car in Naples and drove across the country to Italy’s heel. Driving in southern Italy wasn’t too scary, although some of the smaller towns and villages have narrow roads, so I’d recommend hiring a compact car.

Puglia is pretty, traditional, and has a great reputation for food. It’s one of my favourite parts of Italy. Home to unspoilt sandy beaches and cliffside fishing villages, Puglia is often overlooked in favour of glam places like Amalfi or Cinque Terre, but I think it offers a lot.

You could spend a few weeks just in Puglia, and still have plenty more to go back for, as there are gorgeous beaches, pretty towns and lots of history to keep you busy!  A few places I’d recommend visiting are Alberobello, with its traditional white, cone-shaped Trulli houses (which, collectively have been named a UNESCO World Heritage Site). We spent a night staying in one and it was absolutely magical.

Polignano a Mare is one of the most famous towns, and another absolutely stunning spot. With it’s cove like beach, dramatic cliffs and even a cave restaurant built into the rocks overlooking the water, I fell in love with the place! We spent a day there, eating fresh seafood pasta and gelato while meandering the pretty streets.

Ostuni is another must-see (and one of the best hidden gems in Italy). It’s known as the white city, and from afar has the appearance of lots of white houses stacked up on top of each other. Park somewhere outside the old city and wander up the hill, taking in the magic of the white washed buildings, cute pizzerias and architectural wonders.

If you’re interested in discovering Baroque architecture and want lively nightlife, street food and café lined piazzas, venture to Lecce, one of Puglia’s largest cities. Or consider a trip to Bari or Gallipoli – both great stops on your Puglia road trip.

As you can see, the drive from Puglia to Sicily is a long one. You could do it in a day, but you might be more comfortable breaking it up over a few nights. The fastest ferry route to Sicily is from Reggio Calabria and it takes around half an hour.

It’d be easy to spend a week or two just in Sicily as there’s so much to see and do. Adventure lovers might want to climb Mount Etna. Over 3500m high, you can get pretty high up with minimal effort, as there’s a cable car to get you up to 2500m!

In terms of beauty, Taormina is one of the prettiest hilltop towns in Sicily. It’s home to a theatre built by the ancient greeks, several historic churches, and pretty streets filled with colourful market stalls and restaurants.

Nature lovers will enjoy bird-spotting in the reserves, or you can spend time enjoying the sandy beaches of picturesque Cefalu or Mondello.

It doesn’t seem long ago that I spent a week sailing around Sicily’s Aeolian Islands – something I’d recommend in a heartbeat if you have a bit longer to spent in the region. I hiked Stromboli Volcano, took a mud bath on Vulcano island, and went wine tasting in Salina. The islands are gorgeous, varied and have a wonderful old world charm that I found very comforting.

When Is The Best Time To Visit Southern Italy?

Italy has a Mediterranean climate and is a lovely destination to visit all year round.

Temperatures vary by region, but as a quick example, you can expect average temperatures of around 0°C in around Cortina (a ski resort in the mountains) in January, and as high as 37°C in July in cities such as Milan and Venice. Temperatures in the south remain mild in winter, making destinations like Puglia and Sicily great options for a winter holiday.

If you’re wondering when is the best time to visit southern Italy, I’d suggest planning a trip between April and June, or in September or October, just after the peak summer season.

The weather tends to be consistent in these months, but isn’t too hot. Plus, as you’re missing peak season, you should benefit from lower prices and fewer people.

I hope you’ve enjoyed my southern Italy road trip itinerary. Let me know where you decide to go and what your highlights are!

Looking to explore more of the country? Check out my northern Italy road trip itinerary!

I honestly think this is the best southern Italy itinerary as it’s got a bit of everything. If you want to save it to help with your trip planning, how about pinning it for later…